Movie Review: Iron Man 3 more about the man than the suit, but that’s not bad

The latest incarnation of the Iron Man movie series takes place after the battle in New York that most fans saw in “The Avengers”. The fact that Tony (Robert Downey Jr.) and his super hero friends had to fight aliens and the whole battle is weighing heavily on Tony. So much so that he hasn’t been getting much sleep and when he can’t sleep, he’s in his lab creating Iron Men. All this isn’t good for his relationship with his girlfriend and assistant Pepper Potts (Gwyneth Paltrow).

To add to Tony’s problems, someone calling himself The Mandarin has been showing up on national television claiming to be behind recent bombings. Tony tries to stay out of it and let the government, and his friend piloting the renamed Iron Patriot, AKA War Machine, (Don Cheadle) handle it. But when Tony’s friend and head of Stark Security (Jon Favreau) is badly injured at one of the unusual bombings, Tony threatens Mandarin himself. That turns out to be a bad idea when Mandarin makes the first strike and blows up Tony’s house. 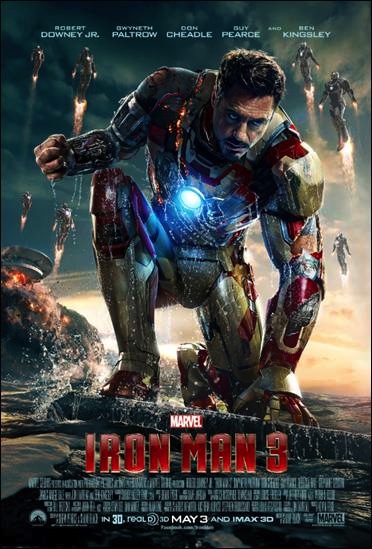 That battle leaves Tony without any of his Iron Man armor. He befriends a young fan who watches over one of his Iron Man suits while it regenerates, which leads to some hilarious interactions. Tony is definitely not the fatherly type.

Even though I’d preferred to have seen more of the man in the iron suit and less of the man by himself and empty armor, it doesn’t really hurt the movie. The story flows well and there’s plenty of action and some nice twists. It’s a tale of love, redemption, recovery and karma. Marvel fans will love Iron Man 3.

I can’t end the review without mentioning Ben Kingsly’s performance as Mandarin. This is one villain you won’t soon forget. The film is rated PG-13 and is now playing. It’s available in 3D, but the 3D doesn’t really add much.

After the movie ends, you can still get your Iron Man fix in the theme parks:

Look for Stark Industry buildings around Marvel Super Hero Island at Universal’s Islands of Adventure. You can also spot some signs of Iron Man in their Spider-Man ride.

The Iron Patriot armor is on display until Aug. 30 at Planet Hollywood at Downtown Disney.

The Iron Manorail is currently running around Disney’s Magic Kingdom. Here’s a look:

On the West Coast, you’ll find Tony Stark’s Hall of Armor inside Innoventions at Disneyland Park. Here’s a video in case you can’t make the trip:

Have an enchanting Christmas with our Disneyland...