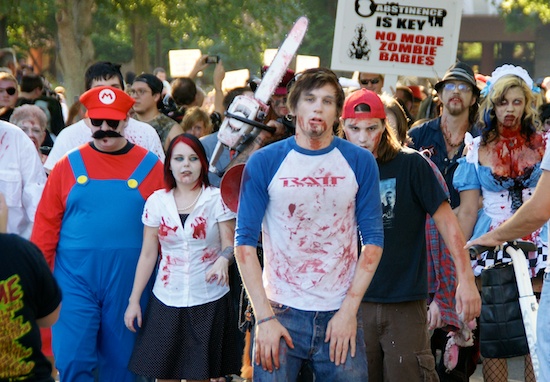 The Spooky Empire Ultimate Horror Weekend returns to the Wyndham Orlando Resort on Oct. 7 to 9. The weekend will start off on Friday with the annual Zombie Walk.

The Zombie Walk invites zombies of all ages to take part in a walk from Uno’s Chicago Grill to the Wyndham Orlando Resort. Other entertainment at the event includes a Hearse & Creepy Car Show, Costume Contest. Live Bands Soulidium, The Green Goblyn Project and SML8 will rock the undead.

During the convention, horror fans can interact with stars and horror icons. A Killer Klowns from Outer Space Reunion will feature the creators Stephen, Edward and Charlie Chiodo, Suzanne Snyder, Grant Cramer, Harrod Blank and Mike Martinez. Legendary author Clive Barker (Hellraiser and Candyman) will be on hand all three days. Actor Malcolm McDowell from A Clockwork Orange, Caligula, Heroes, and Entourage will be available for meet and greets.

Rock and roll fans will be able to meet Steven Adler from Guns n Roses, Jacoby Shaddix from Papa Roach, Paul Phillips from Puddle of Mudd, and Bobby Blotzer from Ratt.

A live shadowcast of the Rocky Horror Picture Show, hosted by original cast member Barry Bostwick “Brad” and a poolside Dead Bangers Ball are part of the event line up for convention attendees.

Advance tickets are $50 for the three day weekend. One day passes are $30 and $35. Visit the website for information and talent line up at spookyempire.com or call the Spooky Empire Hotline 954-258-7852.

And here’s some scenes from the convention floor:

New details on 2019 holiday celebrations at...