Wawa, a popular Mid-Atlantic convenience store, coming to Orlando in 2012 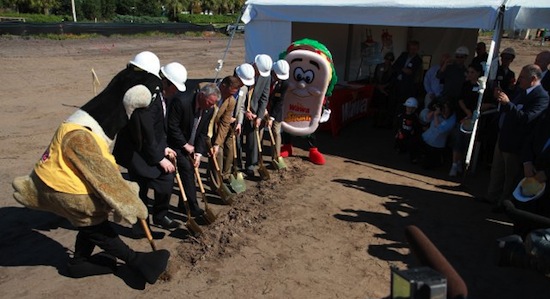 Wawa convenience stores and their mascot goose are heading south. The Mid-Altlantic states favorite will open their first Florida store near SeaWorld in July 2012.

Located at the intersection of Central Florida Parkway and International Drive, this location will be the first of five Wawa stores to go under construction before the year’s end. A new look and store design was unveiled during a groundbreaking ceremony earlier today. Wawa officials, members of Wawa’s Real Estate team and Wawa’s Mascots Wally Goose & Shorti, joined the site contractor, land developer and local community officials for the milestone occasion.

Wawa will celebrate the grand opening of their first Florida store on July 18, 2012, with four more stores opening within one month’s time. Wawa plans to open 20 stores in 2013, 25 stores in 2014 and 25 stores in 2015, and projects it will open 100 stores in the Orlando market in the next five years.

“We can’t wait to make the sunshine state our new home, and are committed to filling a void in customer’s lives and providing them the level of convenience and appetite appeal our customers have come to rely on us for,” said Todd Souders, Wawa’s Director for Store Operations in Florida.

Wawa began in 1803 as an iron factory in New Jersey. Then in 1902, Wawa became a processing plant, then a dairy farm and in 1964 the first Wawa convenience store was opened. Today Wawa operates more than 570 stores in Pennsylvania, New Jersey, Delaware, Maryland and Virginia. The company’s original dairy farm was built on land located in a rural section of Pennsylvania called Wawa, which was named from a local Native American tribe in honor of their favored game – the Canada Goose.

As a Maryland transplant, I’m super excited about this. I just hope they expand to the Lakeland area. The deli in Wawas is great, and they have incredible sweet iced tea. There’s nothing like this in the area.

I am very excited to get a couple wawas near me so that I dont have to travel 23 hours to get to one.

When is Wawa going through their hiring process? I would love to work for this company.

Will you be opening any around Ocala or The Villages Fl.

How close will there be a Wawa to The Villages Fl. 32162. We have 90,000 people here and growing. We have a lot of people that have moved here from the north east. It would be a great addition to our community.

Do you plan on opening a Wawa near The Villages, FL? There is much need for such a store as we have 90,000 people here and limited convenience stores.

When will the hoffner road location open in Orlando?

It’s supposed to open within a month of the first one opening – so soon.

As my email address indicates, I am a Delawarean by heart and am sooooo looking forward to the John Young location opening!

Nobody bakes a cake as tasty as a Tastykake!

They really need a wawa in south lakeland

Chapel Hats is the first of many...