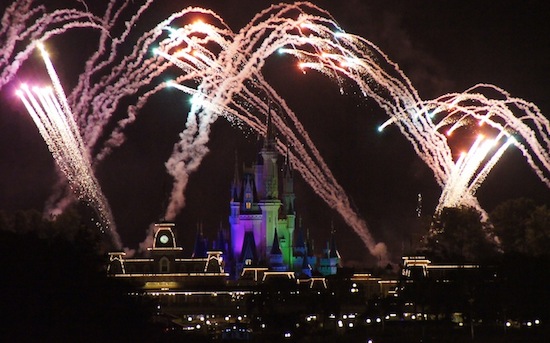 There’s a lot going on for New Year’s Eve, but not all of the theme parks will be having special events or fireworks at midnight. Here’s a list of the New Year’s Eve events. But be warned , it’s the busiest day of the year and many of the parks may close when they reach capacity.

• At Magic Kingdom, guests can celebrate by ringing in the new year with a special fireworks show at 11:50 p.m. entitled: Fantasy in the Sky. Mickey’s Once Upon a Christmastime Parade along with Holiday Wishes will also be taking place throughout the day and night.

• At Epcot, guests can dance away 2012 to the beat of DJs stationed at select pavilions throughout the evening and watch “IllumiNations: Reflections of Earth” salute the new year at 7 p.m. and 11:42 p.m. A buffet dining experience inspired by Disney’s Fantasia and Fantasia 2000 will take place at World ShowPlace facility, with reservations available from 4:30 p.m. through 10:30 p.m. It is priced at $68.67 for adults and $44.37 for children. Park admission is required.

• At DisneyQuest, located at Downtown Disney, there is a special-ticket family-friendly cyber celebration from 8 p.m. through 1 a.m. Guests will be entertained with a DJ Dance Party, character meet and greets, plus unlimited access to games and DisneyQuest attractions. There’s a confetti drop and festive party favors as the clock strikes midnight. Partygoers also get a coupon for a quick service entrée, side and drink. Tickets are $60 each.

• At Cirque du Soleil, located at Downtown Disney, all guests attending the Dec. 31 performances will receive a limited-edition Walt Disney World/Cirque trading pin. Shows are at 6 p.m. and 9 p.m.

• Registered guests at select Disney resorts will be treated to music and entertainment. At Narcoosee’s restaurant (Disney’s Grand Floridian Resort & Spa), for instance, there will be a four-course dining experience for $161.85 for adults and $77.19 for children, plus DJ, balloon artist and special fireworks viewing.

On Dec. 31, Universal Orlando Resort guests can ring in 2013 at Universal CityWalk’s New Year’s Eve celebration. Partygoers will enjoy a live concert by REO Speedwagon, dine on gourmet cuisine – including filet mignon and jumbo shrimp and crab claws, and dance the night away at some of Orlando’s best nightclubs. In addition to a high-energy live concert, guests can enjoy access to seven of CityWalk’s hottest clubs, including Rising Star, the groove and Red Coconut Club. Guests can also indulge in all-you-can-eat cuisine and desserts and raise their glass to 2013 with a midnight champagne toast and celebratory confetti burst. Tickets are $144.99 plus tax per person. Universal CityWalk’s New Year’s Eve celebration takes place from 8 p.m. through 2 a.m.

Celebrate the New Year SeaWorld style with all their holiday entertainment including Shamu’s Christmas Miracle, A Sesame Street Christmas and Winter Wonderland on Ice followed by a special fireworks finale at midnight. This event is included with park admission.

Countdown to 2013 with special musical entertainment, holiday themed shows and a special fireworks finale. The finale is visible from all around the park with the prime viewing location being Gwazi Park. This event is included with park admission.

The whole family can enjoy a family-friendly party for six nights beginning Dec. 26 with a Coundown to New Year’s and a Kids’ New Year’s Eve party. Each day during the Countdown to New Year’s (Dec. 26-30), the celebration starts at 2 p.m. Special events include a New Year’s themed live-action show in Pirate’s Cove Stadium and grand finale fireworks over Lake Eloise with special Legoland viewing glasses.

In addition, the whole family can enjoy a family-friendly party with Kids’ New Year’s Eve on Dec. 31. Kids get to rock out in Miniland USA with a live DJ Dance Party. After the live-action show and fireworks, everything will be in place for the enormous Brick Drop at just the right time for kids, midnight Kid Standard Time (KST) – otherwise known as 6 p.m.

Medieval Times Dinner & Tournament is hosting a New Year’s Eve Party on Dec. 31. The New Year’s Eve party includes a special 9:30 p.m. show, hors d’oeuvres, admission to the Medieval Village, a four-course medieval feast, party favors, a DJ and dancing, champagne toast at midnight (non-alcoholic substitutes will be available for guests under 21), a midnight countdown with balloon drop and a continental breakfast. Tickets are $69.95 for adults and $35.95 for children.

What an amazing way to spend New Year’s Eve! Thanks for putting this all in one place for us!

Star Wars: Return of the Jedi in...