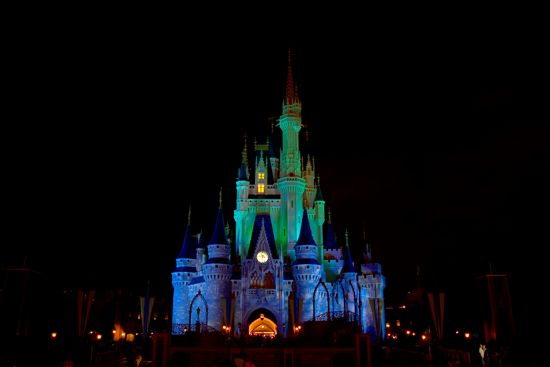 Here are some of the new things happening around Walt Disney World this summer. We’ve written about some of these before, but some of this is brand new information. Be sure to get a copy of our Summer 2009 issue for more information on many of these happenings.

Adventurers’ Celebration Gathering
A khaki-clad cast – including Mickey Mouse, Minnie Mouse and Goofy – gather near Disney’s Animal Kingdom entrance each evening during park closing to bid farewell to guests with the music-filled Adventurers’ Celebration Gathering. Cast members shake their pom-poms and urge guests to join in the street-party fun by dancing to the music and forming a conga line procession while the Disney characters keep the beat from atop their safari vehicle.

The Pirates League
Calling all scoundrels, rogues and ne’er-do-wells – Captain Jack and the crew of the Black Pearl want you. Starting in late June, the Pearl drops anchor in Adventureland for The Pirates League, recruiting and training park guests of all ages in the scurrilous ways of buccaneers. Each guest checking in at the plunder-filled recruitment office gets an official pirate name. Next step is the Muster Station where – after applications of beards and eye patches, scarves and scars, earrings and gold teeth – the new recruits leave their old identities behind. Past a hidden portal and into the treasure cache, the new shipmates speak the pirate oath and have their official “pirate portrait” taken before being turned loose on an unsuspecting Adventureland – and no doubt feeling right at home at the Pirates of the Caribbean attraction. Boys, girls and grownups ready for the pirate life start the process by calling 407-WDW-CREW beginning May 11. Packages start at $49.95 plus tax.

Hall of Presidents to reopen
A July reopening is planned for the Hall of Presidents, an iconic attraction in Magic Kingdom. An Audio-Animatronics version of President Barack Obama will join representations of the previous 43 presidents of the United States as part of an attraction that has been celebrating American history since Walt Disney World Resort opened in 1971. Disney Imagineers also are updating a broad array of show elements.

Fourth of July
“Disney’s Celebrate America!-A Fourth of July Concert in the Sky” will dazzle Magic Kingdom guests at 9 p.m. on the Fourth of July. That same park will feature a performance of the “SpectroMagic” nighttime parade, at 10:30 p.m. In the meantime, Disney’s Hollywood Studios guests are treated to a 9 p.m. performance of “Fantasmic!” while at Epcot, a holiday-inspired “IllumiNations: Reflections of Earth” bursts above World Showcase Lagoon at 10 p.m.

Picnic in the Park
Summer guests to Disney’s Animal Kingdom have a new casual option to restaurant mealtimes – “Picnic in the Park” for al fresco dining. The to-go meal includes either sandwiches or rotisserie chicken or ham. Meals include sides, desserts and bottled water for each guest. Prices range from $24.99 for a meal for three to $56.99 for a meal for six. Meals can be booked at the podium near the park entrance or, after 1 p.m., picnics can be ordered at Tusker House Restaurant. Picnics are ready for pick-up within two hours at the Kusafiri Coffee Shop & Bakery in the park.

ESPN RISE
The inaugural ESPN RISE Games presented by Target will take place July 19-25, 2009, at Disney’s Wide World of Sports Complex. The week-long event will be anchored by three invitation-only, elite high school sporting events: the AAU 17-under Boys Basketball Super Showcase, the Under Armour High School Softball All-American game, and a new high school football event – Champion Gridiron Kings – a 7-on-7 competition featuring skill position players. The event will also feature competitive youth sports – baseball (10U, 11U and 12U), basketball (10U, 12U and 14U), field hockey (14U, U16 and 19U) and track & field (14-18).
The ESPN RISE Games is expected to welcome 4,000 student athletes. Team enrollment for the event’s open basketball, baseball, field hockey and track & field programs is available. Additional information on the ESPN RISE Games presented by Target is available at www.espnrisegames.com.

Treehouse Villas
Treehouse living, a Walt Disney World tradition from 1975-2002, returns with the scheduled opening of 60 three-bedroom villas elevated 10 feet off the ground on pedestals and beams. Designed to blend into the forest glens where they are nestled, these vacation villas will sleep up to nine and provide Disney’s Saratoga Springs Resort & Spa with a new room category.

Kidani Village
Following the successful conversion of select rooms at Jambo House (at Disney’s Animal Kingdom Lodge) into vacation villas in 2007, Kidani Village is taking shape (for phased openings scheduled in the spring and fall) with thatched roofs and a hewn timber design. Kidani means “necklace” in Swahili and the new building is shaped like a piece of native African jewelry with villas forming the beads, walkways creating the knots in between and the lobby representing the ornament or jewel at its center. With the May 1 opening also comes Sanaa, a new family dining location, featuring savannah views at select tables and serving familiar foods from tandoor ovens in addition to slow-cooked specialties with the flavorful spices of Africa and India.

Bay Lake Tower
Scheduled to open late summer, Bay Lake Tower nestles beside Disney’s Contemporary Resort and will serve up a variety of views including grand vistas of lakes and land, such as Magic Kingdom, from its 295 two-bedroom equivalent villas. Planned amenities include a community hall, pool bar, in-room dining, tennis courts, a pool and a water play area.

Disney Vacation Club accommodations can be booked by anyone for overnight stays through www.disneyworld.com or by calling 407/W-DISNEY (934-7639).

Did I hear that there was a new theme attraction opening relating to Harry Potter? if so, when? Great IDEA

The Harry Potter attraction will be at Universal Studios, not Walt Disney World.