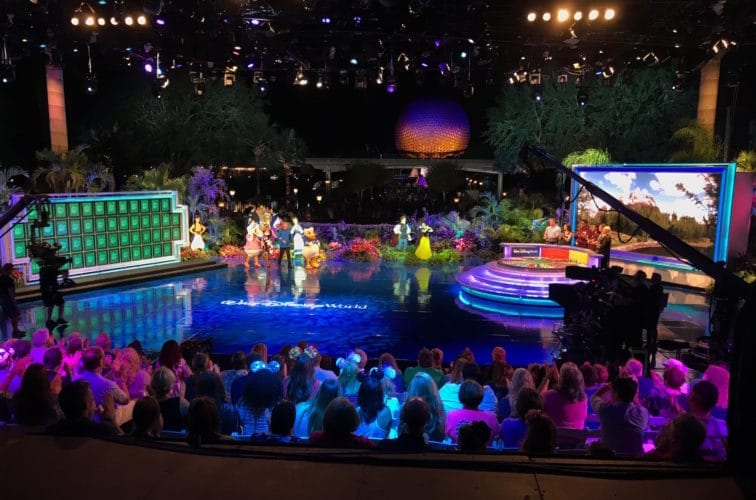 Wheel of Fortune is celebrating Valentine’s Day with a week of shows from Epcot at Walt Disney World this week, Feb. 12-16, 2018.

“Disney and Wheel of Fortune are a magical combination of brands that give families opportunities to create memories together,” said Harry Friedman, Executive Producer, Wheel of Fortune. “When planning our 35th Anniversary season we could think of no better place to mark this memorable milestone than the Walt Disney World Resort.”

In celebration of Valentine’s Day, married couples will be paired as contestants all week on Wheel of Fortune. The shows will feature Disney’s Fairytale Weddings, “Happily Ever After” fireworks show at Magic Kingdom, a couple newly married at Walt Disney World, as well as other highlights and attractions from around Walt Disney World Resort. The episodes were taped at Epcot back in October 2017.

Disney is providing a selection of prizes for contestants and viewers during the week. Contestants will be spinning for Disney gift cards, as well as Disney Cruise Line trips, vacations at Aulani in Hawaii, and Adventures by Disney prize packages. “Prize Puzzles” across the weeks will be Disney Vacation Club trips.

Viewers at home can enter a special sweepstakes to win a family vacation to Walt Disney World this week. Details on how to enter can be found at WheelOfFortune.com. Check your local listings for channel and time that Wheel of Fortune airs.

This is Wheel of Fortune’s second week of shows for its “35th Anniversary at Walt Disney World” celebration. The first week aired in November 2017 and the final week will air April 30, 2018.

Catch the video below for our look at the taping at Epcot and an interview with Pat Sajak and Vanna White, and be sure to catch our Feb. 14 episode of “The Attractions Show” for more behind-the-scenes glimpses at Wheel of Fortune.

Thanks for giving me this opportunity