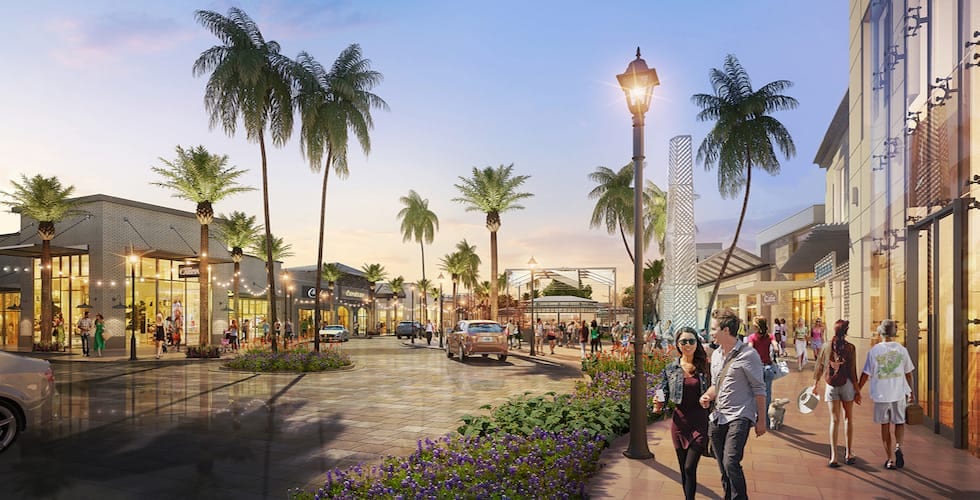 An artist’s rendering of the new SunsetWalk area at the upcoming Margaritaville Resort Orlando.

Margaritaville Resort Orlando is coming more and more to life, as the first major retail locations have been announced to join the shopping, entertainment and dining portion of the resort.

SunsetWalk at Margaritaville Resort Orlando, formerly Shoppes at Rolling Oaks, will be the anchor for the $750 million, 300-acre development that will offer the 187-room Margaritaville hotel, 900 resort rental homes, 300 timeshare units and a 12-acre, multi-million-dollar water park. The project is currently under construction near U.S. Highway 192 and State Road 429 in Osceola County, just across the street from Disney’s Animal Kingdom.

The largest new tenant coming to the resort is Studio Movie Grill (“SMG”), a state-of-the-art 40,000 square-foot theater that will feature 12 screens and over 1,000 luxury recliners. SMG will offer an immersive environment where moviegoers can socialize before and after their film in the lobby, and enjoy American Grill food and beverage service directly to their seat at anytime during the show.

Another large tenant coming to SunsetWalk will be the 24,000 square-foot GameTime, a family entertainment center. Including a modern restaurant and sports bar, GameTime will offer a large selection of arcade games, simulators, prize machines and more than 60 TVs for viewing sporting events.

The country music group, Rascal Flats, will be opening a contemporary dining location with a full-service bar, live entertainment and retail space. The restaurant will feature American cuisine alongside some of the band’s favorite foods while guests enjoy Rascall Flatts’ 29 Top 10 Hits and other live and local country music.

Another restaurant related to Gene Simmons and Paul Stanley of KISS will be opening at SunsetWalk, called Rock & Brews. The restaurant will feature a scratch kitchen, hundreds of craft beers on tap and by the bottle, and plenty of rock music.

“Our goal was to create a true entertainment destination in the heart of the Margaritaville Resort Orlando, and we knew that we had to bring in new, unique, family-centric tenants to accomplish this,” said Arthur Falcone, CEO and managing principal of Encore Capital Management. “We will be able to offer tourists and locals nearly 200,000 square feet of pedestrian-friendly shopping, live music, children’s entertainment area and now a state-of-the-art movie theater.”

Other confirmed retail locations include:

The planned Phase 1 will open in November of this year, but there are still a few spots left for retail and restaurant locations, according to Falcone.

The new Margaritaville Resort Orlando will include a variety of resort vacation homes, cottages, villas and timeshares. Featuring a casual-luxe design and colorful exteriors, these new homes will embody the laid-back lifestyle of Margaritaville with an authentic tropical vibe inspired by Key West, Jamaica, coastal Carolina, the Bahamas, the Florida Keys and towns along the Gulf Coast.

For more information on SunsetWalk at Margaritaville Resort Orlando and its offerings, visit encoreretailcenters.com.