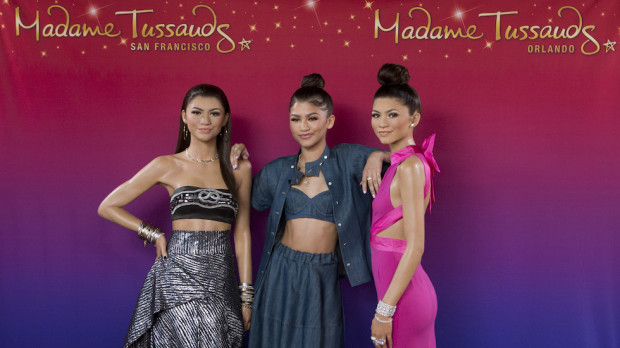 Singer and actress Zendaya attended a special unveiling in San Francisco for two brand new wax figures of herself for Madame Tussauds.

Styled to reflect Zendaya’s appearances at the 2014 Teen Choice Awards and 2014 BMI Hip Hop R&B Awards, one figure will remain in Madame Tussauds San Francisco, while the other will be featured at Madame Tussauds Orlando.

Zendaya is best known for her starring role as K.C. Cooper in Disney Channels’ “K.C. Undercover,” and for the platinum single hit off her 2013 self-titled debut album, “Replay.” She is currently working on her second studio album.

With a strong belief in body positivity and individual beauty, Zendaya’s style and confidence has won her wide appeal among teens and young adults. With the launch of her figures, she has joined an exclusive group of celebrities whose figures are a result of extensive requests from fans eager to see their favorite stars immortalized in wax.

“This is a major, major honor and it’s so cool to have it in the Bay where I’m from,” said Zendaya of the reveal. “This is the best trip ever. I get to be home and be with my people…and also my twins!”

The 19-year-old star met with studio artists in June where she underwent the unique experience of a Madame Tussauds sitting, capturing her expressions, poses, taking more than 250 measurements and matching eye color and hair color. Keen to reflect her own hip and edgy style on both figures, Zendaya donated the pink Material Girl dress, which she wore to the 2014 Teen Choice Awards. For her second figure, Madame Tussauds worked with one of her favorite designers Rubin Singer to recreate the look she wore to the 2014 BMI Hip Hop R&B Awards.

Madame Tussauds Orlando has new Florida resident rates, offering attraction admission for $18 ($13 for children between the ages of 3-12). This special offer saves visitors more than 25 percent off regular admission. For a limited time, tickets may be purchased at MadameTussauds.com/Orlando or at the attraction’s admissions desk.