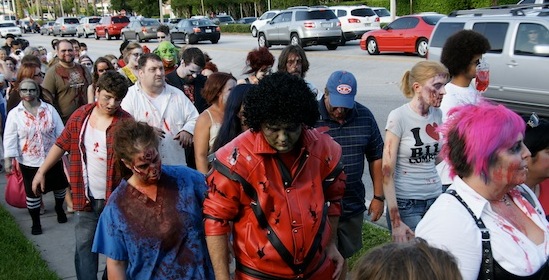 Watch out I-Drive tourists – the zombie horde is returning. Everyone’s invited to put on your most torn-up, stained clothes and join The Deadite Empire as they host the fourth annual Zombie Walk down International Drive. This is just the opening ceremony to Spooky Empire’s Ultimate Horror Weekend. This year’s event returns to the Wyndham Orlando Resort on Oct. 8 to 10, 2010.

Hundreds of zombies will invade Uno Chicago Grill starting at 1 p.m. next Friday, Oct. 8. There will be zombie games, FX artists to hep infect you, hearses, creepy cars and horror movie celebrities. Then at 4 p.m., the zombies will take to the streets as they limber and limp to the Wyndham Resort.

Once Horror Weekend begins, you’ll find celebrities such as the original cast from Nightmare on Elm Street along with the original Freddy Kruger, Robert Englund; the original zombie from Night of the Living Dead Bill Hinzman; the cast from TAPS; the Hare Krishna Zombie from the original Dawn of the Dead; horror filmmaker John Carpenter; guitarist Ace Frehley; Elvira; Steve Gonsalves, Dave Tango, and Amy Bruni from GhostHunters; and many more.

Ultimate Horror Weekend usually attracts more than 11,000 horror fans. The convention floor will feature vendors, tattoo artists, horror celebrities and the most gruesome of movies in the film festival. There will be a celebrity charity poker tournament, music, celebrity Q&A sessions and a party by the poolside at night.

Advance tickets are $50 for the whole weekend and $30 to $35 per day. It’s free to attend the Zombie Walk. More information and tickets can be found at spookyempire.com

And here’s an overview of the convention in 2009:

Vote on which former Howl-O-Scream icon will...