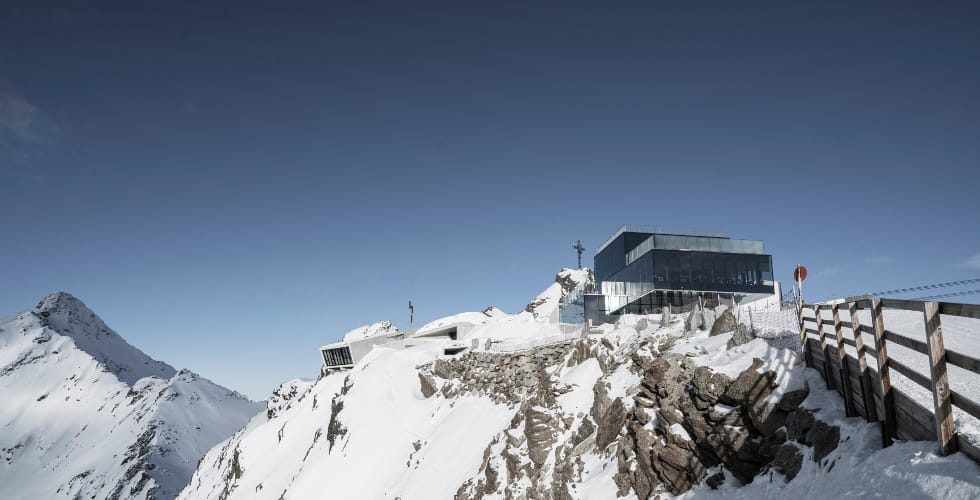 The new 007 Elements exhibit opens soon on the same Austrian mountain where ‘Spectre’ was shot. (Photo by Christoph Nosig.)

Britain’s most famous superspy is headed back to the mountains of Austria for the July 12 debut of 007 Elements, a new interactive James Bond experience opening soon in Sölden.

007 Elements is a new James Bond “cinematic installation” opening on July 12, 2018, inside the summit of the Gaislachkogl Mountain in Sölden, Austria. Sölden was chosen as the home of 007 Elements after the Ice Q restaurant located there was featured in Spectre, the 24th James Bond film, as the Hoffler Klinik, and several surrounding areas formed part of the snow chase sequence in the film.

Housed in a striking new architectural structure, designed and created by Obermoser Architects, 007 Elements is billed as a “state-of-the-art interactive experience.” Built at 3,040m (9,974 feet) above sea level at the top of the Gaislachkogl Mountain, 007 Elements is the highest museum of its kind.

The 1,300 square meter building has been constructed within the mountain and is arranged over two levels, offering scenic views of the Tyrolean valleys. The building is designed as a Bond-like environment, so visitors feel as though they are walking through the world of 007, and according to a preview in Architectural Digest, it will be “kept at 33.8 degrees Fahrenheit to avoid any risk of disturbing the frozen foundations,” so budding spies should be sure to bundle up. 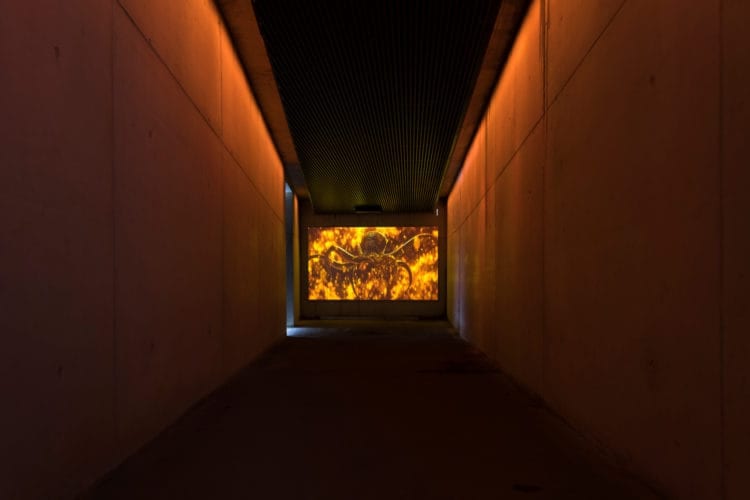 Inside “Barrel of the Gun” at 007 Elements. (Photos by Kristopher Grunert.)

Inside, visitors will journey through a series of galleries, each featuring signature elements that define a James Bond film. The installation will focus on Spectre, which was shot in Sölden, and will also feature other titles in the long-running 24 film Bond franchise. Here are the various segments of 007 Elements, as described by the Official James Bond 007 website:

BARREL OF THE GUN: Visitors enter 007 Elements via the Barrel of the Gun, an atmospheric anteroom focusing on the Bond films’ title sequences and music.

PLAZA: In the open-air Plaza, the angles of the building’s architecture frame the mountain panorama, and recall the work of famed Bond Production Designer Sir Ken Adam, who was the primary influence on the building’s design.

LOBBY: The Lobby echoes the type of antechamber that Bond often enters upon his arrival at a villain’s lair. It features an exclusive film that is narrated by Skyfall and Spectre Director Sam Mendes, which takes the visitor through the history of the James Bond films, from Dr. No to Spectre. Mendes also describes his own personal connection to the series.

LAIR: This room features an immersive digital theatre designed to showcase the characters and dialogue from the Bond films.

BRIEFING ROOM: Actress Naomie Harris, who plays Moneypenny, narrates an exclusive film that explains how the series’ scriptwriting has led to location choices, and how these locations have, in turn, inspired some of the series’ most iconic studio sets. Special attention is given to the locations that form the story-scape for Spectre’s Austrian action sequence. 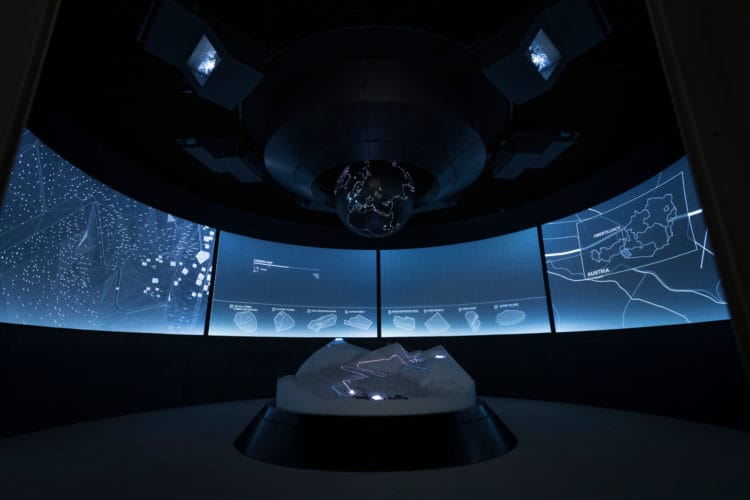 VALLEY PASSAGE: This glass viewing space looks north over the Gletscherstraße, a filming location that was used in Spectre.

TECH LAB: The Tech Lab explores some of the technology that features in the Bond films. This state-of-the-art space allows visitors to interact with the technology and to explore some of the legacy props and digital creativity used in a James Bond production. 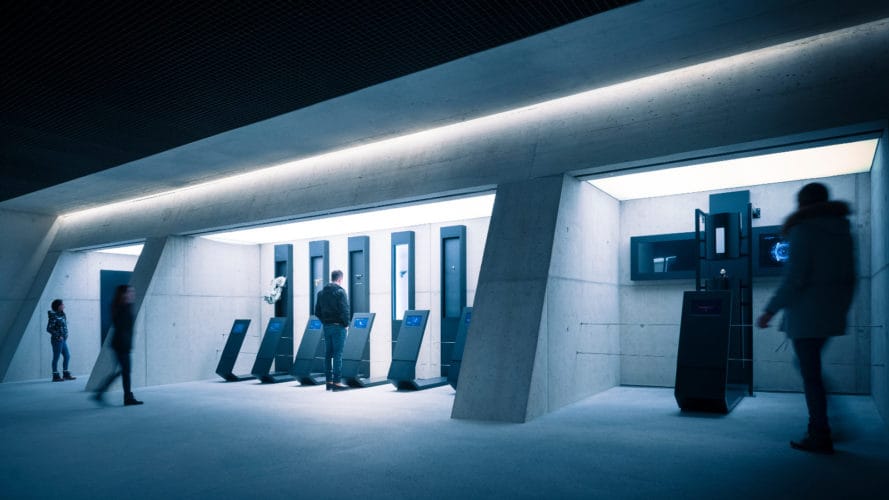 ACTION HALL: This is an installation that centers on the work of the special effects and stunt departments. It features the front portion of the aircraft that Bond pilots in SPECTRE. Visitors will also get a behind-the-scenes look at the exact make-up of Spectre‘s mountain chase sequence.

SCREENING ROOM: In the Screening Room guests can watch the Austrian action sequence from Spectre. 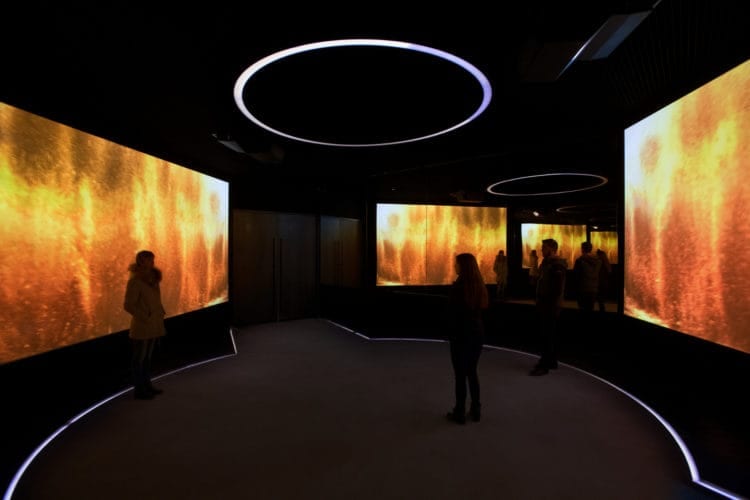 007 Elements is a partnership between EON Productions and Metro-Goldwyn-Mayer (MGM) who jointly own the rights to the James Bond films, and Cable Car Companies Sölden. The project is a collaboration between the Creative Director Neal Callow (Art Director on Casino Royale, Quantum of Solace, Skyfall and Spectre) and Optimist Inc. Head of Design Tino Schaedler.

“Our aim with 007 Elements is to tell the story of the making of 007 films in an ultra-modern, emotive and engaging way,” Callow explains. “We want to use this incredible location to place our guests into Bond’s environment, and bring the stories to life in a unique and unforgettable way.”

Jakob Falkner, shareholder and managing director of Cable Car Companies Sölden said: “We’re delighted to be partnering with EON Productions and Metro-Goldwyn-Mayer to bring Bond back to Sölden by creating a truly unique experience in the heart of the Tyrol region. Together with the many exciting and varied activities available in the area, this James Bond installation will strengthen Sölden’s position as a year-round destination for sports and entertainment.”

For more information, visit 007elements.soelden.com and watch this teaser video:

Prop Store to auction props and costumes from...