The Rumor Queue: Will Mickey Mouse stop talking to guests at Magic Kingdom? 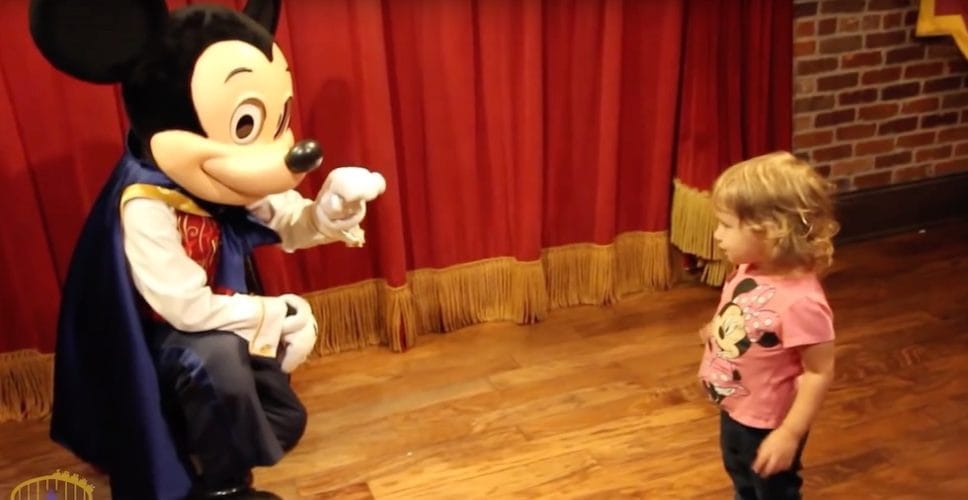 Talking Mickey is a neat experience that Imagineering toyed with for quite some time before debuting the character as a meet and greet in Magic Kingdom’s Town Square Theater in 2013. But rumors are he may stop talking soon.

It’s a seemingly simple setup from the view of a guest. The story is that guests are invited backstage at Mickey’s magic show. Once in this themed area, a Mickey in a magician outfit “talks” and interacts with guests. Seemingly simple but more complex once you dig beneath the surface. (Stop reading here if you’re worried about spoiling the magic.)

This patent appears to be a “peek” behind the curtain so to speak of how this talking Mickey effect is accomplished. In summation, a backstage cast member has an audio database of pre-recorded lines. The costumed performer acts along with it with the help of proprietary Disney technology. It’s convincing.

In January, rumors that were said to have stemmed from Disney cast members related that talking Mickey would be taking a final bow and be replaced by a silent Mickey. This week, fan website WDW News Today stated that May 12 is the rumored final day to meet talking Mickey at Magic Kingdom’s Town Square Theater.

We reached out to Disney for comment. They told us they don’t have information to share at this time. Scroll down for our videos of mickey talking with guests, from his first appearance at the 2011 D23 Expo, to a recent test at Disneyland with Mickey, Minnie and Donald all talking to guests. You’ll also see just how emotional some guests get as they actually get to have a conversation with Mickey Mouse. I hope we haven’t seen the last of talking meet and greet characters in the theme parks.

• Fowl Owlerson has been attending theme parks since he was a little owlet. When he’s not filtering through the latest murmurings around the industry, he can be found writing, reading, and snacking on the occasional rodent. Follow him on Twitter @fowlowlerson for the latest rumors, and drop an anonymous letter to him at [email protected]m or via direct message on Twitter.

New Lamplight Lounge to open in Pixar Pier on June 23

My family visited the talking Mickey in Disneyworld in January 2018, and it was a wonderful experience not only for our 2 granddaughters who were mesmerised by him, but also for us as adults, we loved the interactive experience with Mickey. It was one of the highlights of our visit, you only have to look how long the wait is to see how popular he is. I would be very disappointed if he was replaced.