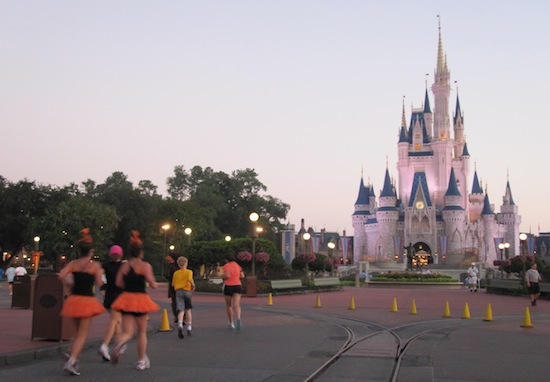 Disney introduced a new Halloween 5K race as part of the opening weekend events of the Epcot Food and Wine Festival. This is the first time the Magic Kingdom has been the site of a 5K race. 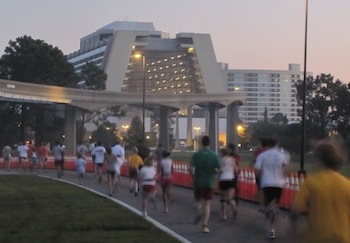 The race started in the twilight of 7 a.m. Saturday at the Transportation and Ticket Center. Many of the 2,300 registered participants were dressed in costume. Runners streamed under the water bridge and past the Contemporary, to enter the front turnstile gates of the Magic Kingdom.

Main Street was very different this time. Normally it’s is lined with the thunderous roar of cheering spectators during the Walt Disney World full and half marathons. For this 5K the Main Street sidewalks were nearly empty. But we still heard cheers and applause. This time from smiling Main Street cast members applauding and high-fiving runners with big white mouse gloves.

The route through the Magic Kingdom continued through Adventureland, then looped the long way past Splash Mountain and Big Thunder Mountain and followed the riverfront to Liberty Square.

The course passed in front of Cinderella Castle, into Tomorrowland. Runners then went backstage through a gate to go through a water stop, exiting the Magic Kingdom park under the railroad and along the monorail beams. 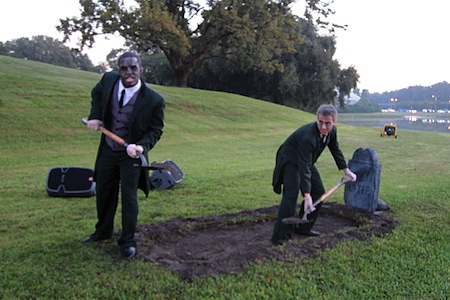 The Magic Kingdom had many photo opportunities with characters. But the funniest race entertainment I have ever seen were a pair of Haunted Mansion grave diggers along the road to the Contemporary. For photo opps, you quickly pass your camera to a cast member, pose, and quickly get your camera back as you dart back into the race.

Then it was quick return back to the finish at the Transportation and Ticket Center, running the same road that we started on. Finisher’s medallions and trick-or-treat bags were waiting after the finish.

The race entry also included a ticket to Sunday night’s Mickey’s Not So Scary Halloween Party in the Magic Kingdom.

Later that night was the main event – the Wine & Dine Half Marathon. It coincided with the opening weekend of the Epcot International Food & Wine Festival.

The race started at 10 p.m. at the ESPN Wide World of Sports. From there runners headed three miles west to Disney’s Animal Kingdom, then back on Osceola Parkway to World Drive and Disney’s Hollywood Studios.

The course through Hollywood Studios was the longest route through one single park Disney has ever done. It ziped down and back the full length of the park about four times.

The most teasing entertainment of the night were the cooking stations in the Studio, where you could see, smell and hear food sizzling on grills.

The race ended behind Epcot at the International Gateway. After retrieving our checked bags with a clean shirt, we were overwhelmed by the enormous crowd of family and friends waiting for us in the streets of the United Kingdom pavilion. It felt like instant party!

Race registration included a coupon for a beverage and entree at any of the 25 countries in this year’s Food and Wine Festival. I had been to the soft opening last week and found the food delicious. It was even more delicious after burning more than 1,300 calories in the 13.1 mile run!

The characters at Epcot were just like other guests in the party, exchanging conversation for a minute before posing for a photo. It was very charming to see a young lady bouncing up and down with excitement about meeting and speaking with Mulan.

Just like the initials of EPCOT, Every Person Came Out Tired.

Watch this video to run along in the Wine & Dine Half Marathon:

Run along in the Inaugural Disney Wine & Dine Half Marathon 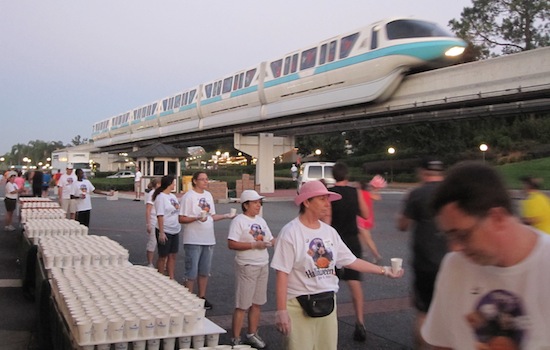 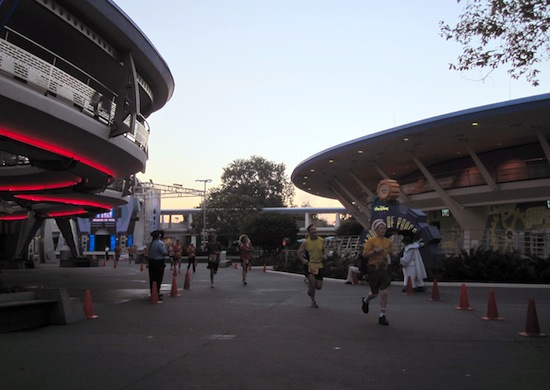 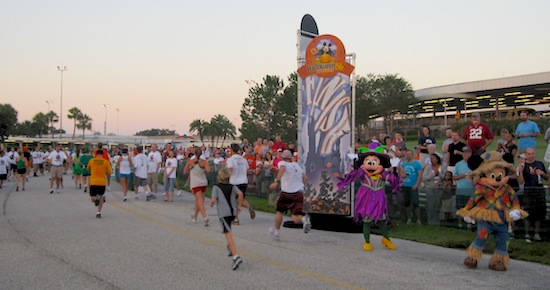 Winning couple to 'tie the noose' during Halloween Horror Nights

I wish they would have given awards for the top runners and timed this race and at leat given a medal and not a rubber Mickey head on a lanyard.kind of disappointing for the money,although we had a good time

The Wine and Dine 1/2 marathon was kinda bottle-necked thru out most of the course. However the Christmas lights in the Hollywood Studios was a nice surprise. I’m not too happy that some who quit still got their medals. Also the after party was a total SNAFU ! Maybe next year they’ll get it figured out. =)

It was my first half marathon and I had a great time! Still, I thought some of the paths were too narrow (especially through Animal Kingdom), some were too dark (approaching DHS) and the after party food lines were very long. Room for improvement, I guess!

Take a walk in a ‘Winter Wonderland’...