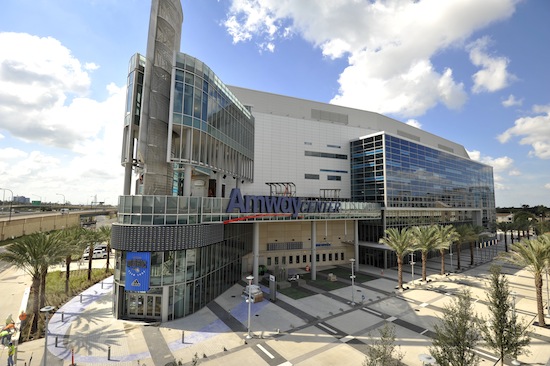 Article by Susan and Simon Veness

“3-2-1-OPEN!” And, with that short countdown, Orlando’s newest “attraction” was declared open to the public. And a pretty amazing prospect it is, too.

Because the new, state-of-the-art $380 million Amway Center is not just a sporting and entertainment venue, it is a sparkling beacon at the heart of downtown that embodies the hope of urban regeneration and renewed tourist attention. 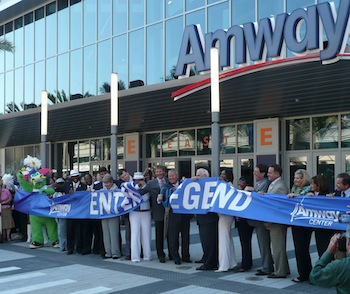 We were fortunate enough to get an exclusive media tour on opening day in the company of Mayor Buddy Dyer and Orlando Magic President Alex Martins, themselves indicative of the unique partnership that has been forged between the City, Orange County and Orlando’s prized NBA franchise.

And the three-way funding program for America’s newest – and arguably most eye-catching – indoor venue looks likely to be money well spent, as the full interior exploration of the 875,000 sq. ft. building reveals that this impressive undertaking has been completed to the tiniest detail.

The Center is not just massively user-friendly, it is highly eco-friendly, too, with an array of “green” initiatives for utilizing storm-water runoff, energy-efficient building and lighting systems, recycled materials and sustainable elements that make it one of the highest-performing professional arenas in the country. 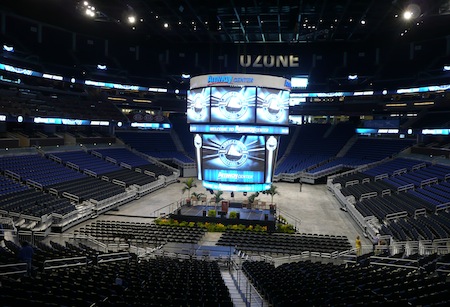 Basketball fans will be able to revel in extra-comfy seats (two to four inches wider than at the old Amway Arena), twice the space in the concourses and corridors, double the concession stands and restrooms, a stunning Daktronics scoreboard (the biggest and most feature-packed of any NBA team), and an array of extra facilities – including bars, lounges and dining – that help to make the new Center a real delight for all users, whether it’s game day, concert day or just any other day.

In fact, the dining options will mark a stellar jump forward from the old venue as the in-house catering by the Levy restaurant group will feature an unprecedented level of on-site options, with even 40 percent of the concession stands able to produce fresh food rather than the typical pre-prepared hot-box variety.

The variety of food on offer around the main concourses has also been significantly enhanced while the standout new option of Jernigan’s restaurant is possibly the most upmarket dining venue of any sports hall in the country, with Executive Chef John Nicely putting together a mouth-watering menu from a display-kitchen concept that is simply stunning (we got to try a half-dozen dishes, and each one was outstanding, with Nicely’s deep-fried Portobello chips in a ginger-soy sauce and his Seafood Salad, featuring Florida shrimp and Maine lobster, both highly recommended).

The restaurant will also be open to all Amway Center customers, not just the club or suite-level guests, but it will be highly advisable to book in advance. It’s three-tiered dining terrace features a superb view of the main arena, as does the signature Budweiser Baseline Bar on the Terrace Level. 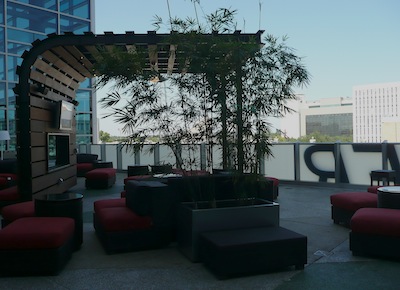 Other highlights and unique features include the Gentleman Jack Terrace, again open to all-comers, with a chic bar area and Church Street overlook that will be open an hour before Center events and an hour afterwards; the Sky Bar, a superb rooftop indoor/outdoor bar that sits atop the 100ft-high Amway Tower; and the Promenade Level FanZone, a combination Magic Hall of Fame museum and interactive games area that also offers the imaginative kids play center of Stuff’s Magic Castle. 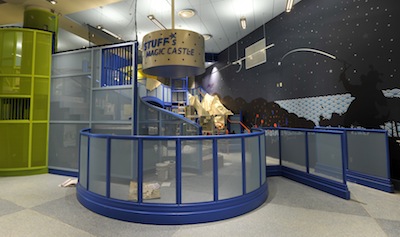 As well as a new open year-round Magic fan store, there will be more shopping outlets sprinkled throughout the Center and an array of video screens and cutting-edge digital signage both inside and out, all powered by the U.S. military-grade technology of the Harris Corporation that adds significantly to the Center’s ‘Wow!’ factor.

And, for those who just want to have a good look around before they splash out their hard-earned cash for the many sporting and concert events that should seriously enhance the downtown scene, there will be various Center tours (still to be confirmed) to whet the appetite of visitors, ensuring a first-hand look at this high-tech colossus.

Most importantly, though, as both Mayor Dyer and Magic President Martins were keen to stress, this represents a major step forward for downtown Orlando’s credibility as a living, thriving community, as it provides work for local residents, much-needed high-quality amenities, a credible link across the I-4 “divide” and a viable new heart for the Church Street area, the likes of which we haven’t seen since Church Street Station closed 10 years ago.

The pedestrian area immediately adjacent to the Center will become a major focal point both before and after events, linking directly across Church Street to the rest of downtown, and we can easily see this being the start of the long-awaited revitalization – especially if, as Martins promised in his opening speech, this marks the beginning of “multiple world championships” for the Magic!

Thanks to Don Gworek, Here’s a quick video tour:

Amway Center opening - A quick tour around the new arena in Orlando, Florida 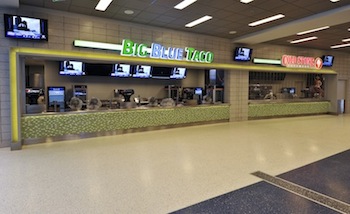 The Promenade and Terrace Levels will feature specialty carts developed by local restaurants and vendors such as the soul cart serving fried chicken and home-style meatloaf and the Latin cart specializing in picadillo beef and sofrito chicken. Local companies who will have carts at the Amway Center include:
• Paradise Island Café
• Java Express
• Pita Hut
• Rugbymar
• Linda’s Hot Dog

In all, the Amway Center has 45 portable concession carts. One of the more unique cart offerings is the Noo-Shi cart on the Promenade Level, which serves chicken or beef Japanese udon noodles, made with garlic oyster sauce, snow peas, scallions, yellow peppers, mung bean sprouts and torn cilantro leaves. 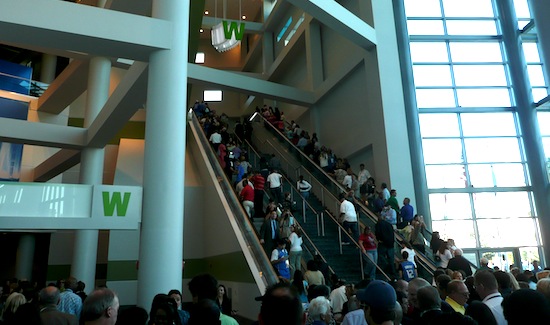 9,000,000: Number of LED lights in the center-hung videoboard, the tallest and most high-definition in an NBA venue, measuring 42ft high and weighing in at 80,000lbs.

800,000: Gallons of water saved annually in the environmentally-friendly building which employs a rain water collection system for irrigation and high-efficiency water flow fixtures in restrooms. Water consumption will be reduced by 40 percent over a comparably sized building.

750,000: Estimate dollars in annual energy savings because of the high efficiency “green” systems in place. Overall, the environmentally-friendly systems will cut energy consumption by 24 percent over a comparable, code compliant, designed building.

7,000: Magic tickets priced $25 or less, including the first-time ever introduction of $5 tickets (while supplies last).

340: Pieces of art work (140 original pieces and 200 museum quality photographs), as part of the public arts program for the building. Fourteen Central Florida artists contributed an estimated 110 pieces to the collection.

227: Food and beverage points of sale. There are 18 permanent concession stands and 45 portable units, while 40 percent of the stands have cooking capability.

180: Feet the iconic spire atop the tower overlooking downtown reaches into the sky.

48: Miles of cable used to wire the Center.

18: Number of elevators, compared to four in the old building. In addition there are 19 staircases and six escalators, easing vertical travel over the seven levels of the building.

17: Number of hospitality spaces available for rent on a per event basis.

5: Public concourses, averaging 30-feet in width, compared to one 20-foot wide concourse in the old building.

Great article on the new Amway Center! This is by far the best I have read so far 🙂

Thank you very much for the information great post, found it on Yahoo. Thanks.
Regards
Al Riyadh

With regard to varicose abnormal veins, try equine chestnut, a natural extract which has been shown within studies to bolster veins and minimize swelling.