A detailed look at Universal Orlando Resort from above 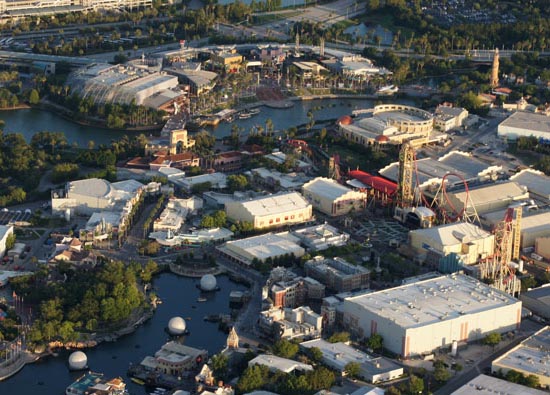 The Universal Orlando resort is beautiful from the air, as well as the ground. Join us as we closely examine the elements of the two theme parks from above.

Starting at the top is CityWalk. Then going clockwise are the Colleseum at Hard Rock Live, Hollywood Rip Ride Rockit roller coaster, the show building of The Mummy, the movie projection spheres in the central lake of the Studios park, and the wedge-shaped theater of T2-3D. 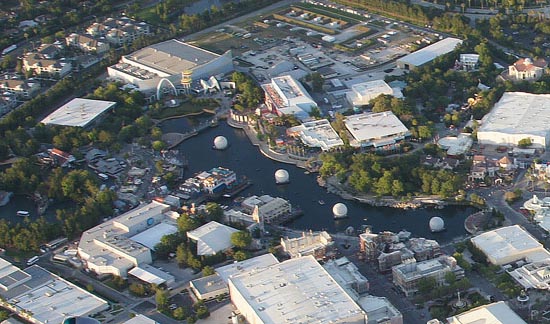 At right center is the show building of the E.T ride. The lower shore of the lake is lined with the facades of the New York City and San Francisco backlot buildings. Top left is the Men in Black ride show building. 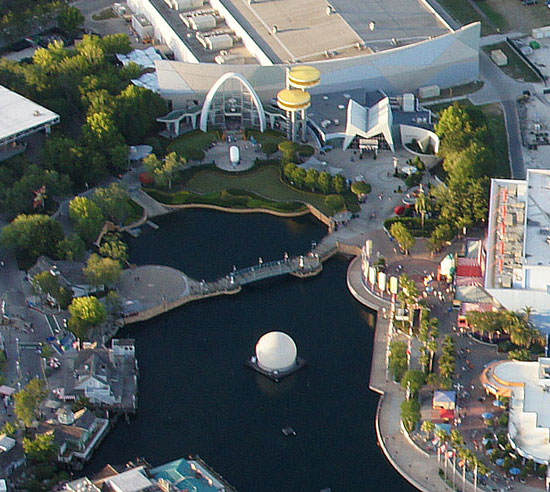 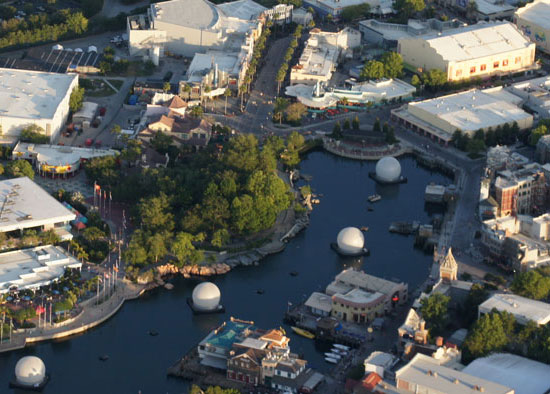 The Terminator theater is at the top center. You can see some detail in the backlot facades. 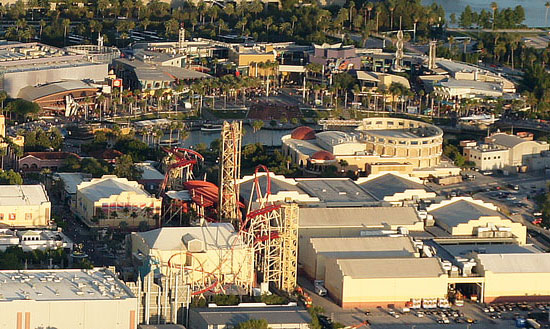 CityWalk is at the top frame. Center right is the colliseum facade of Hard Rock Live. In the foreground is Hollywood Rip Ride Rocket. 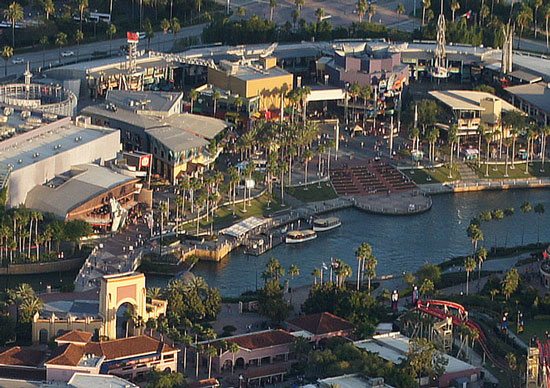 CityWalk, with a dabble of the Hollywood Rip Ride Rocket track in the lower right. 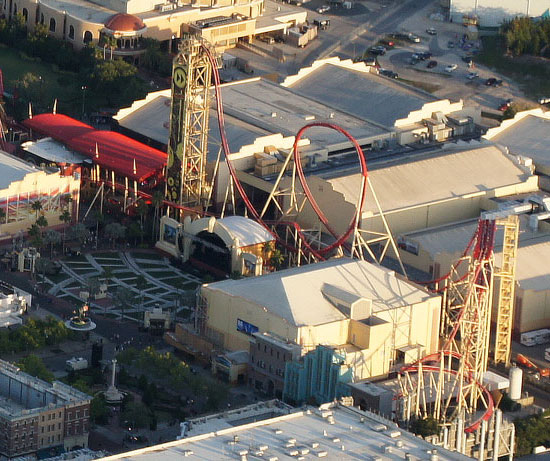 Overview of the Islands of Adventure park. Jurrasic Park’s big drop is from the show building at the top center. 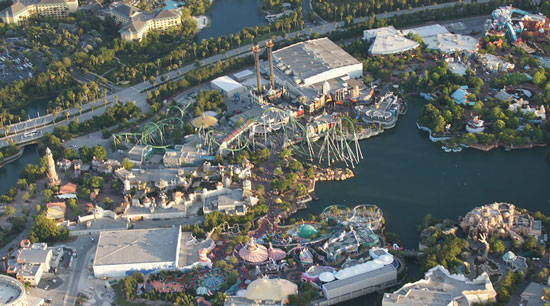 Seuss Landing is at the bottom center. The Incredible Hulk roller coaster is in the center. 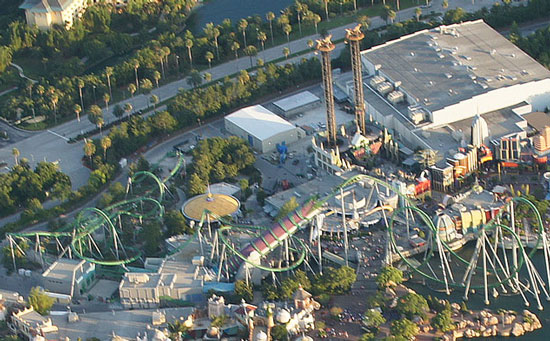 The Incredible Hulk coaster runs all along the bottom of this photo. The Spider-Man show building is adjacent to the twin towers of the Dr. Doom’s Fearfall. 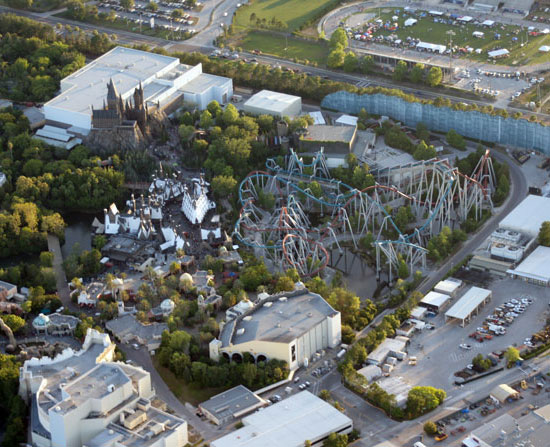 At the center is The Wizarding World of Harry Potter. Note the twin tracks of the Dragon Challenge roller coaster.
At the top right is the Dr. Phillips High School stadium, where a Relay for Life fund-raising event is in progress. (Dr. Phillips was the founder of what became the Minute Maid brand. He owned all of the land in this area, which is known as the Dr. Phillips section of Orange County. His estate is a major charitable foundation in Orlando. Dr. Phillips will also be the namesake of Orlando’s planned new downtown performing arts center.) 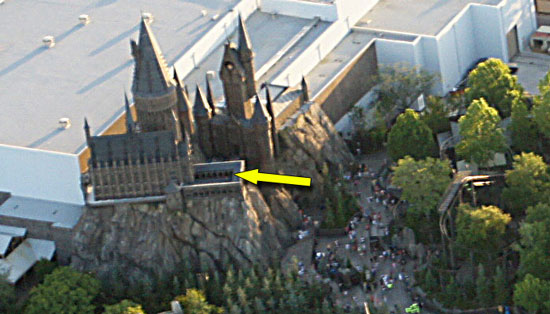 The yellow arrow points to the courtyard of Hogwarts Castle. This is an area that can’t be seen by guests on the ground. This is another example of the extraordinary detail in The Wizarding World of Harry Potter. This section of Hogwarts could easily have been exterior walls only, but you can see it is as detailed inside the courtyard as it is outside! 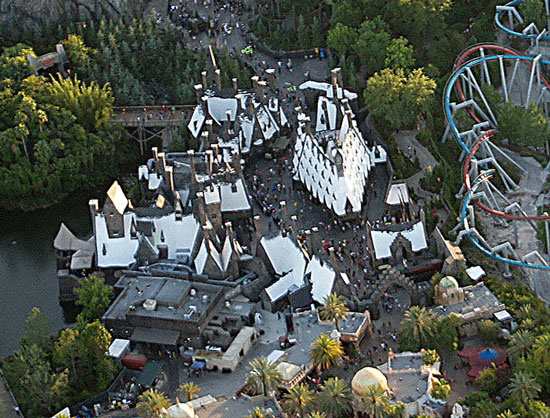 A look at the snowy roofs of Hogsmeade. Note the interlinked track of Dragon Challenge at right.

Love the pics. They make me want to go back soon!

I have trouble with you saying that there is an incredible amount of detail in the world of harry potter when their is not! The ware house is clearly visible to ALL park guest when approaching the castle which is a huge buzz kill. Plus if you look at the photo where that statement was written you can see that the rock wall just stops, and they painted the ware house wall grey, which is not hidden at all from the guest!! This project had so much potential, but Universal really let me down on this one. It is the lack of detail that needs to be pointed out. Plus not to mention the dueling dragons roller coaster towering over the village… it was all just horribly done.

I know this comment is 3 years late, but have you actually been to the Wizarding World? The warehouse is not visible, I know because I walked around & looked from every angle to try & see it. They did a great job of planting trees where they needed to in order to hide the building. The roller coaster is visible, but only from certain angles, & Universal has planted trees in those few visible places as well so eventually you won’t be able to see it. I have been to Diagon Alley as well & rode the Hogwarts Express, which was absolutely amazing.

I miss Nickelodeon Studios. I have a plan. what if little amount of people vists the park and the park has a hard time getting more visitors. It would be a perfect plan for Viacom to save the day and eventually they have to bring back Nick! What do you say? Are You in?