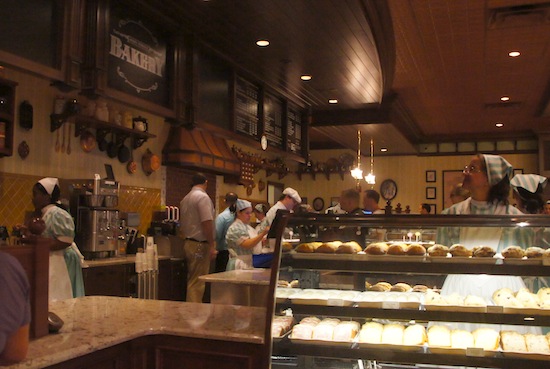 On Tuesday, June 18, 2013, the Main Street Bakery at Disney’s Magic Kingdom will officially reopen with a new look and new coffee and other offerings by Starbucks. A preview was held today and we got a look inside. 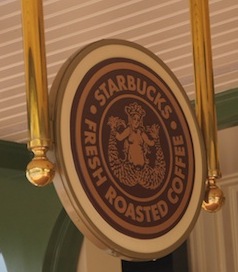 Just over a year ago, Disney announced that all six of their U.S. theme parks would be getting Starbucks locations. The first to open was a part of the reimagined entry to Disney California Adventure. Then last November we found out the first two at Walt Disney World would be at the Main Street Bakery at Magic Kingdom, and in the location of the Fountain View at Epcot.

Here’s our video showing a quick look around the new bakery:

As you can see they offer a full menu of Starbucks beverages, breakfast sandwiches and a wide selection of baked goods, such as muffins, scones and other treats. The bakery also sells some of the same sweet treats they always have such as cookies, cupcakes and brownies. (No cinnamon rolls were offered at today’s preview. It’s unknown if they will be sold here in the future.) The cups are co-branded with Disney on one side and Starbucks on the other. The bakery is staffed by Disney cast members.

The Main Street Bakery does accept Starbucks gift cards and mobile apps. Guests can earn Starbucks Rewards but they can’t be redeemed at the Disney location. The Starbucks at Epcot is set to open later this summer.

UPDATE: One change we forgot to mention is that all of the seating has been removed to make the bakery larger. 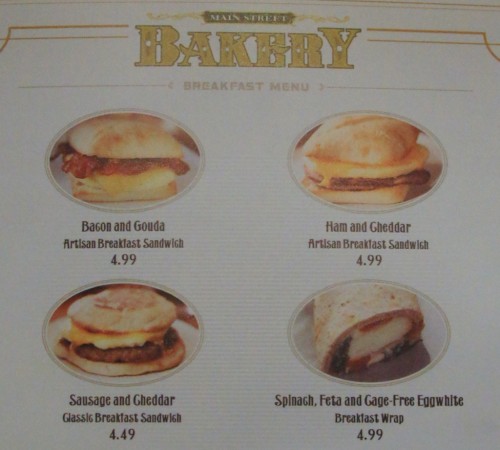 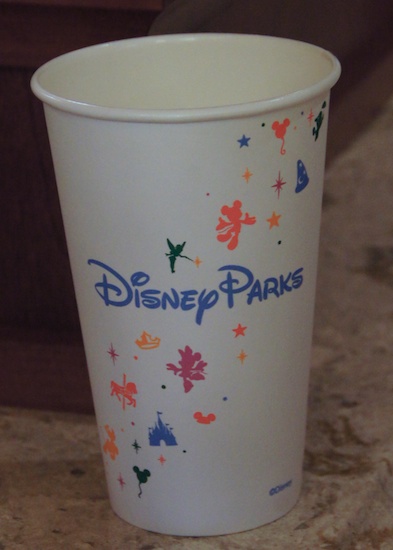 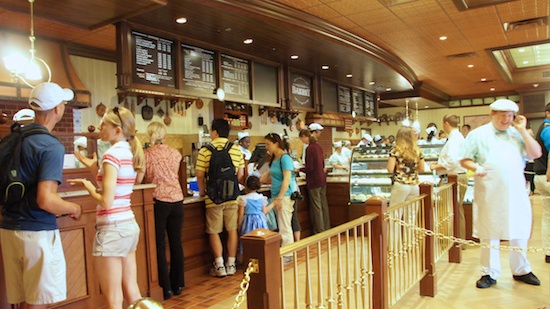 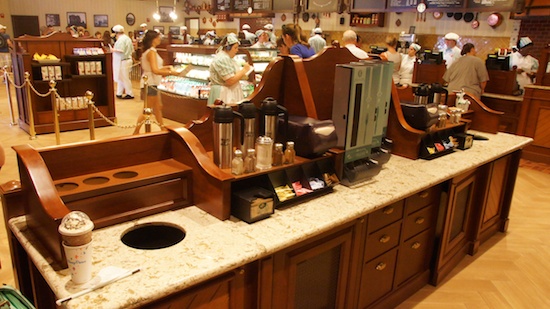 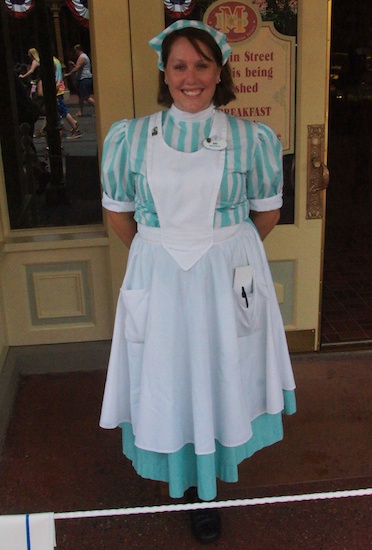 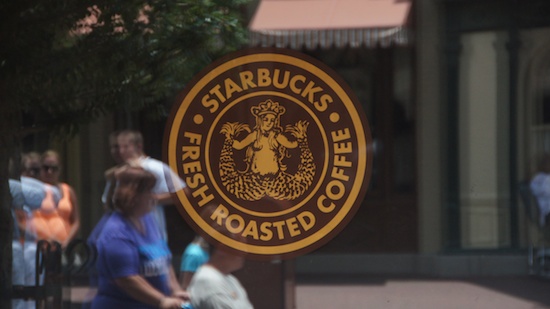 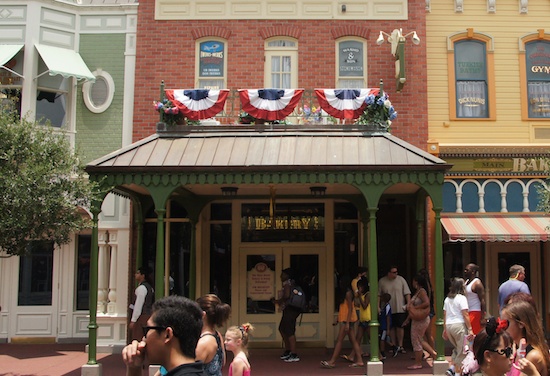 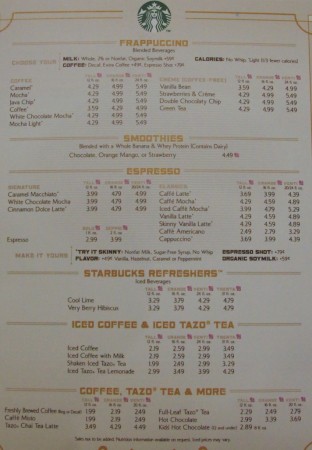 Video and photos by Daniel Andersson.

This is not a “Bakery” anymore. Its a Starbucks exclusively. It has some baked goods but it has ceased to be the Main Street Bakery.

Why not just be honest and call it what it is:

Main Street Starbucks, Inc.
Sad….a good thing that satisfied many guests to the point of overflowing on most days has ceased to exist. Why?

I believe the cinnamon rolls have been permanently moved to Gaston’s Tavern — that’s what we were told when I was a Cast Member at the bakery during the fall.

That’s a huge Starbucks alright, albiet without anywhere to sit and eat your purchase. Makes sense, AND they let the Spectromagic floats rot in the rain. I am so upset!

I was almost disappointed that a huge corporation like Starbucks was moving into a huge corporate park, like Disney, and going to ruin the nostalgia – but I think it’s going to be OK! And the egg sandwiches look amazing – the prices are reasonable!!! (but, I agree, removing the seating?? That was a bit much – now where do you go to eat your breakfast/snack? There was never enough seating before, but at least there was something! This should be interesting to watch unfold over the next couple months/years)….

Yay! I’m so excited for this, thanks for the post! There will finally be a place to get a good cup of coffee in WDW 🙂 And it looks like if i’m not mistaken that you can use the DDP? Sweet!

The nitwit that thought up that change should be fired! Walt would be extremely upset, as I am…. No seats? Ambiance ruined w a corporate logo and cruddy tasting coffee. Where’s the magic of being transported to Main Street USA of years gone by? It’s ruined. 🙁 what’s next? Might as well replace the horse trolley w a greyhound bus! Yeah, Walt would be so “proud”.

I hope the bread pudding muffins are still there. They were amazing!

Let’s not forget ABC broadcasting, which sponsored huge chunk of the building of Disneyland itself, or the Monsanto “house of the future,” or “Adventures through inner Space” or GE’s “Carousel of Progress” or the Hallmark Store or Timex Store that all opened early in the history (some on day one) at Disneyland.
Walt wouldn’t have been upset at all. He would have insisted on high quality, immersive theming, and a high degree of control (i.e. DISNEY employees, not Starbuck’s employee’s). It looks like they have delivered on that front. But Walt being appalled by a well-known corporate name on main street or anywhere else in his park? Sorry. Walt practically invented the idea of corporate involvement in a project such as Disneyland/Disney World.
http://marketingadvice.biz/2012/01/24/what-we-can-learn-from-disney-sponsorship-marketing/

Speaking of high quality control (or lack thereof), anyone notice the cast member in the picture beneath the cup who is yapping away on his cell phone? I had to chuckle at that one. Let’s just hope he’s talking to his area manager about daily sales. Must be a cool manager, because the cast member looks like he’s really having a great phone call. . .or maybe he’s on break. . . .on stage. . . okay, done trying to give him the benefit of the doubt. Just goes to show that you can’t let up when you’re on stage at WDW. You never know who’s going to be snapping a photo and posting it on some tourist blog :).

@Andrew….the cast member is on the headset calling back drink orders.

Okay. . . I stand corrected. I quit giving him the benefit of the doubt too early. His hand just looks like it’s holding a phone.

I had also forgotten that I had read about this from another source. Disney and Starbucks are working together to implement a new system so that by the time you pay for your drink, it’s already made. No more hanging around waiting for the barista to call out your drink and picking it up. If the system works (again, my sources may be inaccurate) it should be utilized in some of the busier Starbucks’ across the country.

I officially apologize to the unknown cast member for even suggesting that he would be involved in “bad show.” Bad show on my part, I suppose :).

Isn’t everything sponsored by some major corporation at Disney? It would be nice if all of the parks and resorts etc. of Disney chose better coffee than what they have been serving.