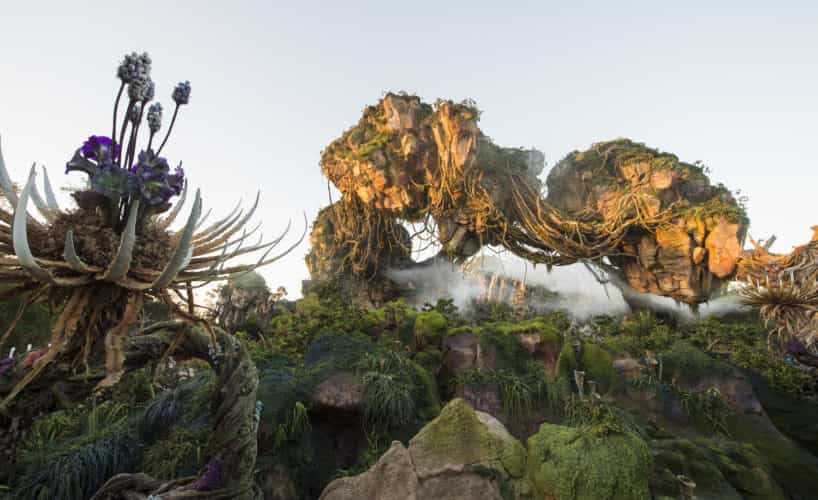 ABC’s Good Morning America, The View, The Chew, and Nightline have broadcast sneak peeks from inside Pandora – The World of Avatar at Disney’s Animal Kingdom.

Fans of James Cameron’s blue-skinned blockbuster are eagerly awaiting the May 27 opening of an Avatar-themed area at Walt Disney World’s Animal Kingdom, and ABC Television stoked the fire yesterday by broadcasting a day-long Pandora preview from the park on Good Morning America, The View, The Chew, and Nightline.

Pandora – The World of Avatar at Disney’s Animal Kingdom opens May 27 at Walt Disney World Resort. The all-new land is largest addition in the history of Disney’s Animal Kingdom, and features massive floating mountains and bioluminescent rainforests. Based on Oscar-winning filmmaker James Cameron’s record-breaking box-office hit, Avatar, the new land welcomes guests to the lush world of Pandora long after the human conflict with the native Na’vi inhabitants has ended. Pandora – The World of Avatar is a creative collaboration of Walt Disney Imagineering, Cameron and Cameron’s Lightstorm Entertainment.

“We are taking our guests on a journey to this world in an experience that’s as realistic and immersive as possible,” says Joe Rohde, Walt Disney Imagineering portfolio creative executive. “In the movie, the world of Pandora is a setting for the action and characters whose story we follow. Here, guests are the primary characters immersed in an extremely vivid, authentic experience.”

Guests to Disney’s Animal Kingdom cross the park’s Discovery River into Pandora – The World of Avatar and continue along a winding rainforest path for their first glimpse of the land’s iconic floating mountains, with waterfalls cascading down the mountainside into meandering streams and pools.

“When guests come across the bridge, they are transferred light-years away, to the Alpha-Centauri solar system and Pandora,” says Jon Landau, Avatar producer, Lightstorm Entertainment. “It’s an otherworldly, fully-themed experience.”

At sunset, the land will transform to glow with bioluminescent flora and intricate nighttime experiences, adding a “dreamlike quality” to Pandora.

Avatar Flight of Passage launches each guest on a winged mountain banshee over the awe-inspiring world of Pandora. Guests will actually feel the banshee breathe beneath them as they soar through the forest and past floating mountains. What was a rite of passage for Na’vi in Cameron’s film becomes a multisensory experience for guests seeking the ultimate adventure – a faceoff with the most feared predator of Pandora, the Great Leonopteryx. 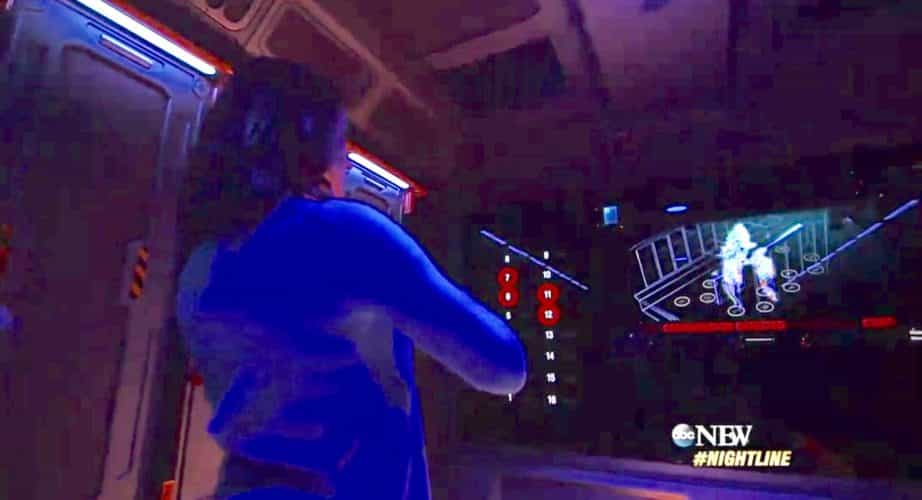 Guests will be scanned and synched with their own Avatar before boarding their Banshee in Pandora’s signature E-Ticket attraction. (Screenshots courtesy ABC’s Nightline)

As these screenshots from Nightline and Good Morning America reveal, the ride vehicles — which resemble futuristic exercise bicycles more than dragon-like animals — are positioned side-by-side in rows, with guests straddling the saddle-style seats and leaning forward into a U-shaped restraint. Also, the “flight glasses” riders will wear appear to have larger, clearer lenses than the 3-D goggles used on the Star Tours or Spider-Man attractions. 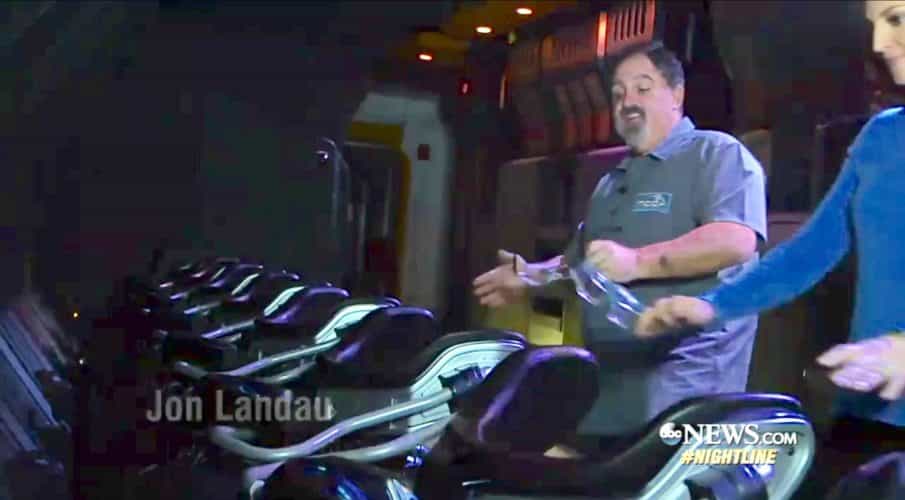 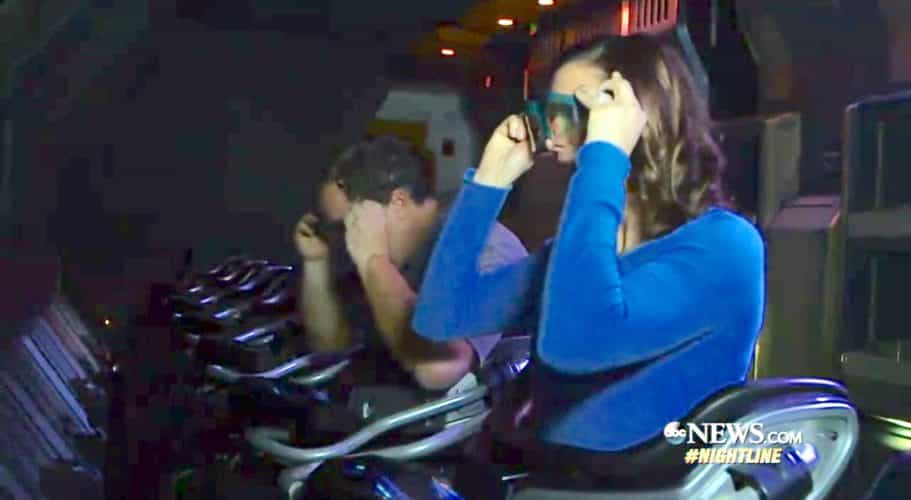 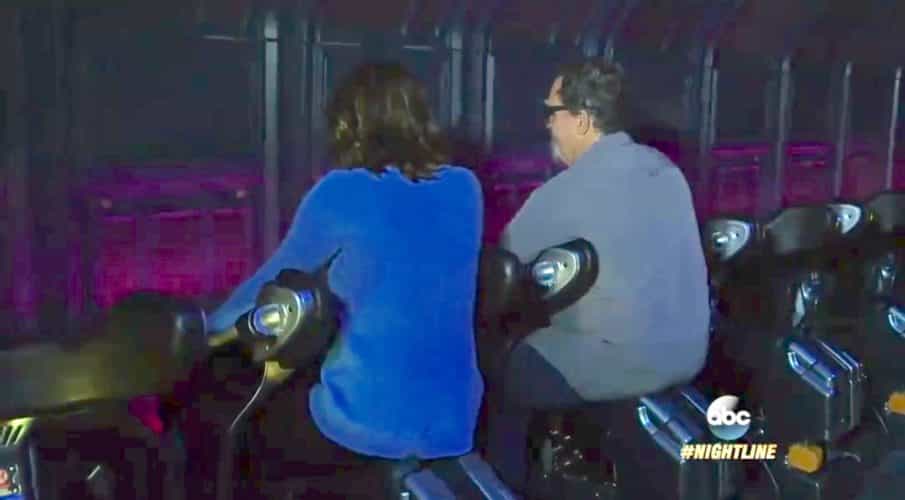 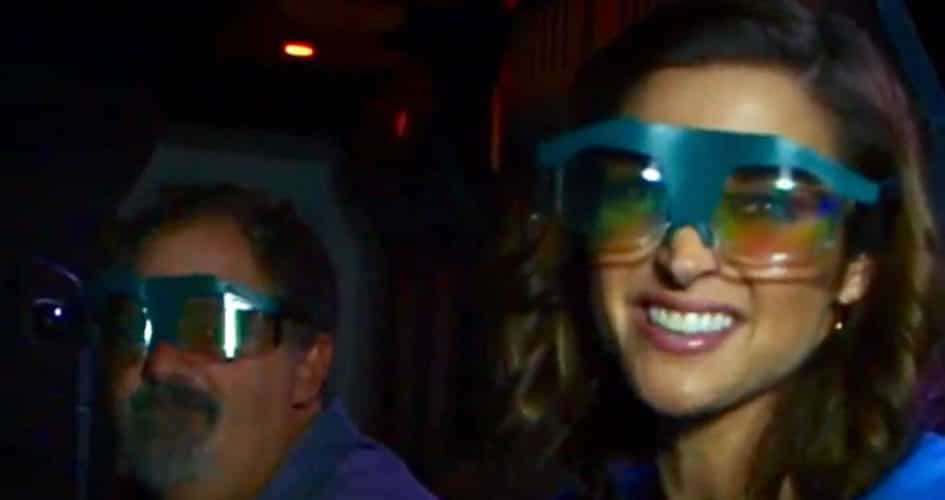 A look at the glasses guests will wear on Pandora’s Flight of Passage ride. (Screenshot courtesy ABC’s Good Morning America.)

On the land’s other attraction, the family-friendly Na’vi River Journey, guests travel down a sacred river deep into a bioluminescent rainforest. The eight-seat reed boats float past exotic glowing plants and Pandoran creatures into the midst of a musical Na’vi ceremony. The mystical journey culminates in an encounter with an animatronic Na’vi Shaman of Songs who is deeply connected with Pandora’s life force and sends positive energy through her music into the forest.

“The Pandora landscape will be alive with creatures,” Rohde says. “We’re bringing to life everything from the largest creature you might encounter to the most microscopic. Animals will appear out of the underbrush – big Pandoran animals will appear at the edge of the forest and you’ll hear the very complicated calls they issue back and forth.”

The storytelling in Pandora continues as guests stop for sustenance at the land’s Satu’li Canteen (pronounced “Sa-too-lee”), a Quonset-hut-style building. The fast-casual restaurant is inspired the healthful bounty of Pandora – wholesome grains, fresh vegetables, and hearty proteins. Guests can grab a drink at nearby Pongu Pongu. Windtraders is a shopper’s delight where guests can choose from Na’vi cultural items, toys, science kits and more.

“The attractions have very deliberate emotional moments crafted into them, the way a good story does, the way a good film does.” Rohde says. “It’s not as simple as just coming to a place that looks realistic. It’s a place that’s been deliberately imbued with the emotions of awe, of wonder, of respect, of harmony.”

Special Olympics athletes will appear in the Magic...

James Cameron’s ‘Secrets of the Whales’ debuts on...

Celebrate the 75th anniversary of ‘Bambi’ with...