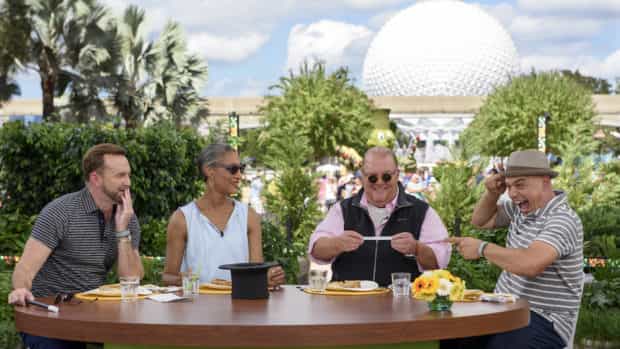 The co-hosts, who entertained audiences last year with stories of their Disney adventures as they whipped up dishes and drinks, will share tasty new recipes and a bounty of festival surprises with their Epcot audiences. Throughout the festival, which runs until Nov. 14, “The Chew” will also feature segments highlighting food and beverages from “around the world” of Walt Disney World and its four theme parks and Disney Springs.

“We had a fantastic time filming our show last year at the Epcot International Food & Wine Festival and sharing the magic with Park guests and our home viewers. It’s the perfect pairing!” said Mark Schneider, executive producer of “The Chew.” “We look forward to returning for even more fun and great food with our fans and celebrity guests. For us, it’s a terrific way to kick off our new season.”

Tickets to be in the audience for the tapings are gone, but there will be a special Q & A session with the hosts on Oct. 4 at 3:30 p.m. in the America Gardens Theatre at Epcot. Seating will be on a first-come, first-served basis.

Check out our look at last year’s taping of “The Chew” in the Oct. 15, 2015 episode of Attractions Magazine – The Show below.

Space and Air Show this weekend at...