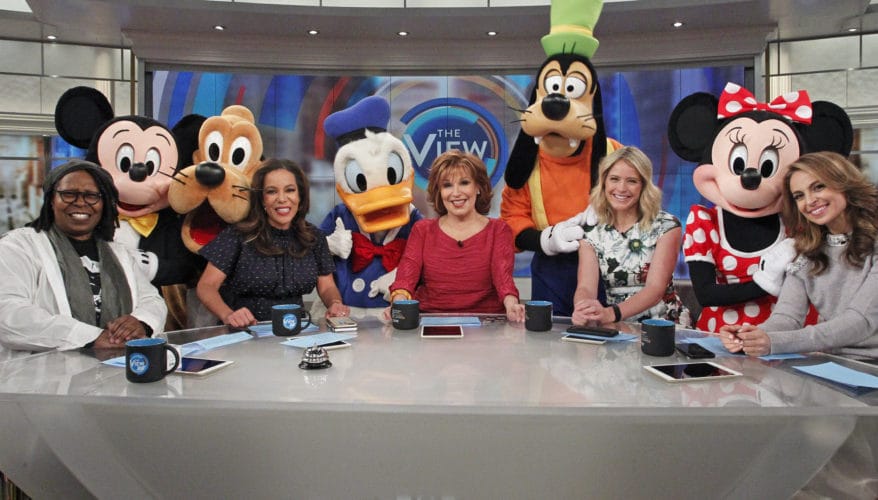 ABC’s ‘The View’ will broadcast from Disney’s Animal Kingdom at the Walt Disney World Resort on March 6-10, 2017.

“The View”‘s co-hosts will visit Walt Disney World theme parks, and welcome celebrity guests to the talk show’s stage at the Animal Kingdom park’s “Tree of Life.” “The View” will continues its year-long celebration of season 20 with its first-ever broadcast from Walt Disney World. The show previously broadcast for one week from the Walt Disney Studios in Burbank, Calif. in March 2009 and from the Disneyland Resort in Anaheim, California in November 2013.

“The View”’s “Magic Is Endless” Sweepstakes presented by American Tourister, is offering the chance for three lucky viewers to win grand-prize packages including a trip for themselves and up to three guests each to Walt Disney World Resort, attend the taping of “The View” at Disney’s Animal Kingdom and receive a $500 Disney gift card. Plus each grand-prize winner and their guests will receive a hardside carry-on suitcase featuring Disney and Star Wars characters courtesy of American Tourister.

The entry period ends January 29 at 11:59 p.m. ET. “The View”’s “Magic is Endless” Sweepstakes is open to legal residents of the 50 U.S. & D.C., 18 or older. No purchase necessary. Winners must travel between March 3-8, 2017. Viewers can learn more and enter for a chance to win at TheViewMagicIsEndlessSweepstakes.com or by visiting The View’s homepage, which contains full details and Official Rules.

Iam a Nurse and have been for 35 yrs., I work hard and I would love to take a vacation to Disney World with my Children/Grandchildren. I watch the View and find it informative. Laugh with you girls. Agree to disagree.

False advertising. I had a two hour one way trip today especially to see the View. It specifically states it would be there March 6-10 broadcasting live from Disney’s Animal Kingdom. I am also handicapped and besides the 2 hours drive to get there. I then had to unload 2 motorized scooters, get through the crowd and you can imagine my disappointment when no one was there. I asked a Disney castmember where the taping was and she said they finished up on Wednesday! You shouldn’t advertise false information and deceive the public this way. Very disappointed.

Sorry to hear that. We were just passing along the information that Disney gave us. We also were planning on going there on Friday when we realized they filmed the last two shows ahead of time.

‘Phineas and Ferb The Movie: Candace Against...