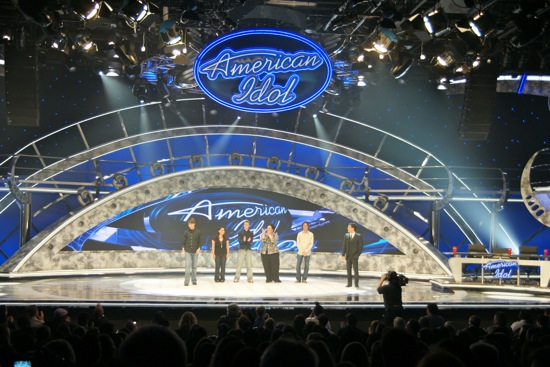 In addition to recently celebrating its first year of operation in February, The American Idol Experience attraction at Disney’s Hollywood Studios can now celebrate the success of one of its top vote-getters – Aaron Kelly. The 17-year-old crooner from Sonestown, Penn., who began his American Idol journey at the Disney attraction, advanced to the top five in the finals during season nine of the American Idol television show. He received the least amount of votes this week and ended his run, leaving four more contestants.

It was at Disney’s Hollywood Studios that Aaron Kelly’s road to American Idol stardom began. Only four days after the grand opening in February 2009, Kelly put his talents on display for park guests and the attraction’s judges.

Once he passed the audition stages and received the most votes at his preliminary show earlier in the day, Kelly’s rendition of the Lonestar hit song Amazed earned him the most votes in the attraction’s grand finale show. As that show’s top vote-getter, Kelly was then awarded The American Idol Experience Dream Ticket, which allowed him a front-of-line spot at a regional audition for the ninth season of the television show.

When the regional auditions for the popular television show were announced, Kelly utilized his Dream Ticket and scheduled his audition in Orlando, which started him on his road to stardom.

Click here to see all our videos from The American Idol Experience opening, Kris Allen’s visit (season 8 winner) and the auditions in Orlando.