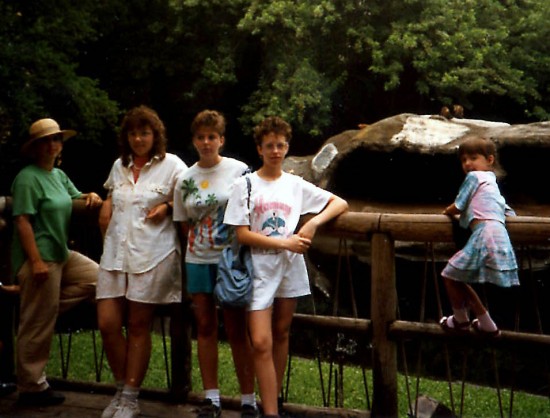 EDITOR’S NOTE: Welcome to the first of many guest columns highlighting theme park memories. This column started out as Retro Orlando by Audrey Brown, but we’ve renamed it and expanded it to include theme park and attraction memories outside the Orlando area. This first Amusement Musings is by Audrey’s sister and her experiences with little Audrey (pictured above, at right) at Six Flags St. Louis in 1987.

In a family of six, there are bound to be conflicts. Featuring three teenage girls and a baby sister, ours was no exception. Being nine years senior to the little one and in a near constant state of teen angst, she and I clashed often. Our other two sisters were much more patient (and less emotionally volatile) than I in getting along despite the age difference.

When the time finally came for us to get up with the sun and pile into the old Vista Cruiser (Yes – just like in That ’70s Show) for a family vacation, my temper often rose with the temperature. Long car trips were rough. Three teens in the back seat, and a 5-year-old sandwiched between mom and dad in the front. (All perfectly legal and considered safe at the time. I know, right?) I was at the height of hormone induced suffering as little Audrey deliberately pestered me. I know this because she fessed up to it as an adult. At our better moments, the whole lot of us serenaded our long suffering parents with songs about the evil Mr. Ed and Midol, which we’d learned from local radio personalities Bob and Tom.

More often than not, our destination was Kings Island. It was in Ohio, just one state over from our Indiana home. And when we finally arrived, all our differences vaporized in the Midwest heat. Despite its association with Paramount Pictures, I don’t recall there being any movie themed rides in the ’80s. All the licensed stuff was reserved for the little kiddies. (You’ll see this evidenced in a 1973 episode of The Brady Bunch, where Jan’s Yogi Bear poster caused one heck of a zany mix up!) In Hanna-Barbera land, Scooby Doo and Captain Caveman ruled supreme.

To uphold the “family vacation” ideal, we were all subjected to the Smurfs Enchanted Voyage, trapped together in a boat as it wound its way slowly through the Smurf village, high-pitched “la la la la la la’s” ringing in our ears and a narrow escape from the evil Gargamel. Oh! The horror! (It was a horror I think we all secretly liked, as it was an enclosed, air-conditioned ride. Return visits later in the day support this theory.) The voyage ended with a blast of hot air as we exited into the hot sun once again. But, we endured the togetherness with minimal complaint if memory serves. Our parents may be disinclined to agree.

Midday, mom and dad would take off to procure us a room for the night. That was when the real fun began. Given leave from our parents, we were free to roam the park at our leisure. Leisure, of course, meaning at full speed and focused on the most daring rides available.

Picture it: Six Flags, 1987 – We’d made it to the time when we were sans parental units, but this time we were left with a kindergartener in our charge. Typical selfish teens, we didn’t want to be held back by Audrey’s tender age, so we decided it was time to introduce her to her first scary ride. I (briefly) questioned our judgment. Would she tell mom and dad the terrible thing we’d done to her to further our own quest for fun? Had it been just me, I’d have chickened out, but I didn’t think she’d narc on my other two sisters. They were nice to her!

The ride we’d chosen to break her in resembled a street car, and the whole thing rose and fell in a circular motion, dropping your stomach into your shoes with each rotation. I sat nervously beside her, waiting for her to freak out and start screaming, thus ending our good time. And yes, the screaming did ensue. But it wasn’t because she was scared. They were screams of laughter! The poor naive little thing couldn’t imagine any harm could come to her in the charge of her trusted big sisters. We couldn’t believe our good fortune. The kid was fearless when it came to amusement park rides!

From that day forward, theme parks became our neutral ground. I strutted along proudly, showing off how brave my little sister was. Together, we laughed at the panic stricken youngsters that were not cut from the same cloth as she was. She strutted along with me, the coolest kid ever, hanging with the big girls that were so impressed with her daring. Our only limitations were the dreaded “You must be this tall to ride.” signs, which we conquered with each passing year as she grew beyond the height requirements and her sisters alike.

I will always be grateful we had the opportunity to find that neutral ground together. Little Audrey is all grown up now, settled in sunny Florida and making a living both filming in and writing about theme parks. I like to think her big sisters may have had an influence on her career choice, with a not-so-subtle push in the right direction. 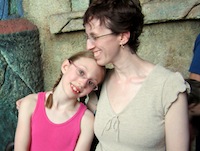 • Heather Cichos is a theme park enthusiast and proud mother of two recently discovered fearless roller-coaster riders. (Well, recently about the coaster thing, not the mother part. She figured that out ages ago.) She has persevered though the multiple melt-downs that always partner a long day of fun, only a few of which were her own.

Non-sequitor! You’re in Kings Island and BAMM all of a sudden 6 Flags??? Same place??? 🙂

P.S. Not only did my sister write the column, she renamed it entirely! I know I’m severely biased…but she pretty much rocks at everything.

We may be adults now, but we are all still kids on the inside.