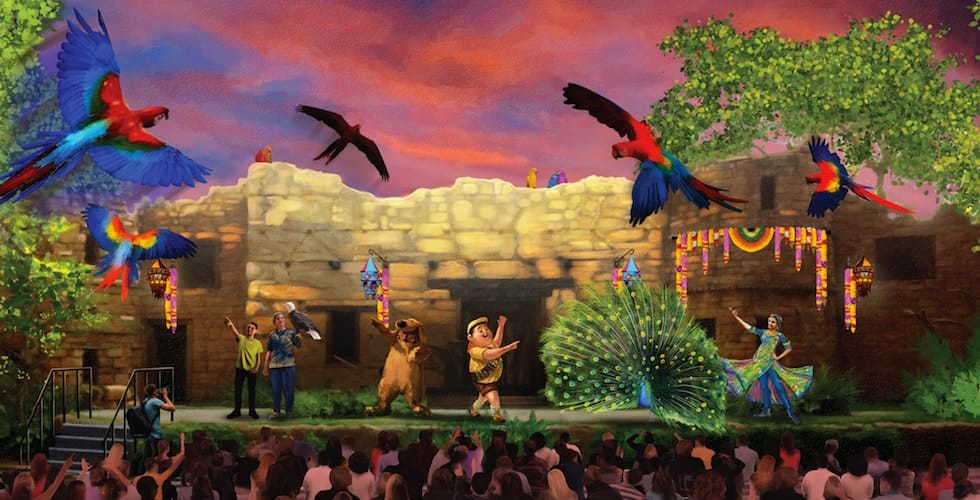 Disney’s Animal Kingdom will celebrate its 20th anniversary on Earth Day, April 22, with more adventures than ever to set the stage for a summer filled with new events and experiences at Walt Disney World.

To commemorate this milestone, the park will offer family-friendly activities, animal encounters, specialty desserts and more during an expanded Party for the Planet celebration from April 22 – May 5. Over the two week celebration, guests can attend conversation talks from animal-care experts, as well as participate in enhanced interactions with some of the over 2,000 animals that call the park home.

Party for the Planet will also include six different Tiffins Talks, which are themed dinners hosted by animal experts at the park’s signature, full-service restaurant, Tiffins. More information on these dinners will be available soon.

Rafiki’s Planet Watch will offer backstage experiences with experts during the 20th anniversary, where guests can learn about animal nutrition, visit the veterinary hospital and learn how Disney helps to promote global wildlife conservation.

Guests can also commemorate the event with special photo opportunities throughout the park. They can use an oversized picture frame that celebrates the park’s 20th anniversary, or other photo frames that support Disney’s “Reverse the Decline,” an initiative that helps protect 10 threatened animal species. One of the program’s recent successes was the birth of two critically endangered Sumatran Tiger Cubs at Disney’s Animal Kingdom.

Kids have a chance to get in on the anniversary fun too, with a limited-edition badge as part of the Wilderness Explorer program. This badge is one of many that younger guests can earn by completing activities throughout the park.

The 20th anniversary activities also include a commemorative adventure guide, limited-edition merchandise, and a special-edition print created by Walt Disney imagineer Joe Rohde. Rohde will be at the park on April 22 from 1 p.m – 4 p.m. to sign prints at Discovery Trading Company, though quantities are limited. For more information on Party for the Planet, check out the event’s website.

Earth Day will also mark the debut of a brand-new show, “UP! A Great Bird Adventure,” featuring Russell and Dug from the Disney/Pixar film, “Up.” The show will send Senior Wilderness Explorer Russell and his canine friend Dug on a new adventure that includes encounters with exotic birds. This show will be performed multiple times daily.

Coming to Disney’s Animal Kingdom on Memorial Day is an all-new“dino-mite” celebration with Donald Duck and friends in DinoLand, U.S.A., where the #1 duck will celebrate his discovery that his bird ancestors were actually dinosaurs.

DinoLand, U.S.A. will receive new decorations for the event, and feature meet-and-greets with rare characters like Launchpad McQuack, Scrooge McDuck and more. A DJ will spin tunes at the truck-o-saurus stage to keep the party going.

New Lamplight Lounge to open in Pixar Pier on June 23