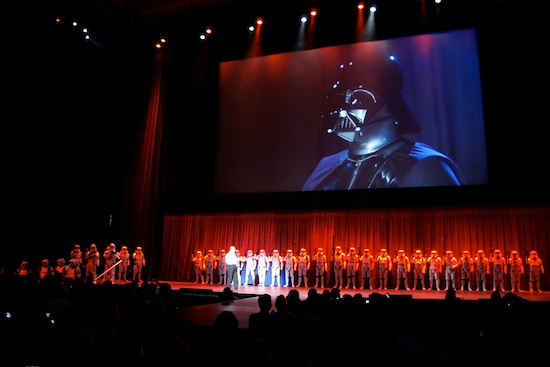 Many celebrities were spotted and surprise big announcements were made during the arena events at the first Disney D23 Expo, and more of the same is expected this year. D23, Disney’s official fan club has announced the arena schedule D23 Expo 2011.

From Aug. 19 to 21, 2011, Expo guests will have exclusive access to presentations from The Walt Disney Studios, Walt Disney Parks & Resorts, Disney Channel and Marvel Comics – plus they will be able to experience the 2011 Disney Legends Ceremony.

6 p.m. to 7:30 p.m. – The Lion King 3D Exclusive Screening
Disney fans will have access to an exclusive advance screening of The Lion King in Disney Digital 3D, ahead of the film’s theatrical and home entertainment releases.

10 a.m. to 11:30 a.m. – Marvel Comics
An exclusive experience will take guests through the evolution of Marvel from its first comic book in 1939 to its current position. This presentation will include interactive Q&A segments. The session will be hosted by Joe Quesada, Marvel’s Chief Creative Officer.

2:30 p.m. to 4 p.m. – Disney Channel
Fans are invited to experience a live performance featuring stars of Disney Channel’s hit series Shake It Up. Guests will meet the cast of television’s first dance-driven sitcom, learn moves from a Disney Channel dance master and experience a special panel, autograph session and more.

In addition to these presentations, the D23 Expo 2011 will include the Ultimate Disney Trivia Tournament, the Treasures of the Walt Disney Archives exhibit – including the Fan Art Gallery, the D23 Expo Live Auction and the D23 Expo Dream Store.

Tickets to the D23 EXPO are available at D23Expo.com. Admission includes access to all experiences and entertainment, including the Disney Legends Ceremony, and can be purchased for single days or for the three days. Admission is $47 for a one-day adult ticket and $37 for children 3 to 12. Three-day passes are $136 for adults and $106 for children. Members of the D23 fan club will receive a discount for up to four admissions, as well as early entry each day for themselves and their guests.

• If you attend this year’s Expo, be sure to stop by the Orlando Attractions Magazine booth in the Collector’s Forum for a special offer and give-aways. If you can’t make it to California, be sure to follow us here, on Twitter and on Facebook as we bring you up to the minute coverage.

Stars in the Parks: M. Night Shyamalan’s wand chooses him

Photo Finds – ‘New Soarin’ Around the...