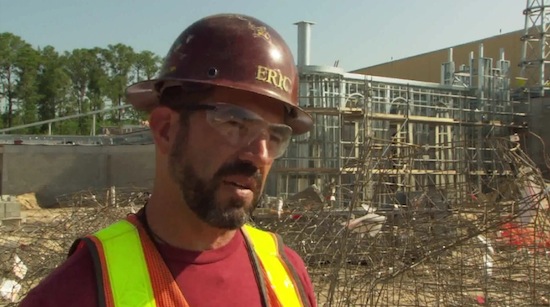 The One Man’s Dream exhibit at Disney’s Hollywood Studios will be getting an update this week. Part of what guests will see is a video produced by Walt Disney Imagineering showing what’s being worked on currently in the parks, including the new Fantasyland at the Magic Kingdom.

The Disney Parks Blog has released a excerpt of the video showing some behind the scenes footage with Imagineers working on the new Little Mermaid ride. Here’s the video:

We knew the New Fantasyland was scheduled to open in phases starting in 2012. But it’s interesting to note the artist’s rendering of the New Fantasyland in the video lists it as Fall 2012. Disney Parks Blog columnist Jennifer Fickley-Baker also mentioned the openings would start in late 2012.

The new Little Mermaid ride at Disney’s California Adventure is already open. There it’s called The Little Mermaid ~ Ariel’s Undersea Adventure. The Disney World version, called Under the Sea ~ Journey of the Little Mermaid, will be the same on the inside. Here’s a ride-through of the Disneyland version:

Here’s our most recent video of the construction from high above Fantasyland:

Here’s a look at the model for Prince Eric’s castle, as seen in the new video:

I was hoping they would make another ride similiar to Splash Mountain- Looks cute but geared towards little kids. I hope they make some more thrilling rides in fantasyland for the adults!

I TOTALLY ARGEE WITH KATHY… keep working guys i cant wait to come to fantasyland! LOL