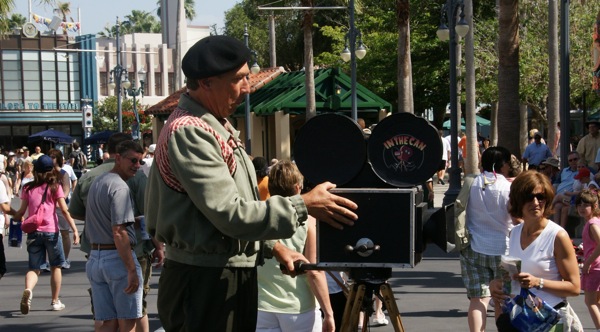 The Democrat and Chronicle newspaper out of Rochester, N.Y. has a good story about one of its former citizens, Tim Trombitas. But you may know him better as Vladimir Pooey, one of the Streetmosphere characters at Disney’s Hollywood Studios.

Who knew he used to be famous as Ranger Bob, was a football star, a disc jockey and is an ordained deacon.

If you visit Walt Disney World in Orlando, Fla., look for a character named Vladimir Pooey in the Hollywood Studios section working the crowd as part of an improv troupe of actors.

You can’t miss him. He’ll be all dressed out like a 1940s movie director, right down to the “lion tamer” pants that flare out at the side, and the shiny black boots.

Tell him you’re from Rochester. You might be surprised at the response.

Movie director Vladimir Pooey, you see, is just one of many incarnations that Tim Trombitas, aka Tim Kincaid, has brought to life over the years.

Details and prices on The Pirates League at Magic Kingdom