Details and prices on The Pirates League at Magic Kingdom 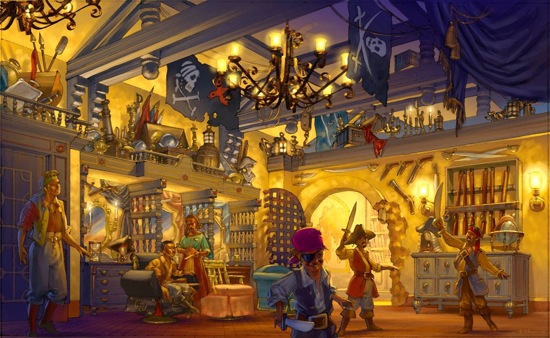 Calling all scoundrels, rogues and ne’er-do-wells – Capt. Jack and the crew of the Black Pearl want you.

Starting in late June, the Pearl drops anchor in Adventureland at Magic Kingdom for The Pirates League, recruiting and training Walt Disney World guests of all ages in the scurrilous ways of buccaneers.

Each guest checking in at the plunder-filled pirate’s lair gets an official pirate name. Then it’s off to Muster Station for applications of beards and eye patches, scarves and scars, earrings and gold teeth – all done with the savvy skill of a veteran pirate who shares his own tales of sea-sailing adventures.

After the new buccaneers recite a sacred pirate oath, they are officially part of Capt. Jack’s motley crew, leaving their old identities behind. Past a hidden portal and into the treasure room, the shipmates have their “pirate portrait” taken before being turned loose on an unsuspecting Adventureland – and no doubt feeling right at home at the Pirates of the Caribbean attraction.

Newly donned swashbucklers can test their pirate prowess on the streets of Adventureland where they search for clues and discover treasures.

Boys, girls and grownups ready for the pirate life can start the process by calling 407/WDW-CREW. For more information about The Pirates League, visit disneyworld.com/crew.