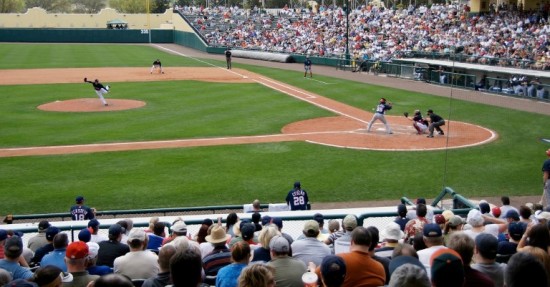 The ESPN Wide World of Sports Complex at Disney has announced the 2012 spring training dates for the Atlanta Braves.

Each Braves spring training game has a unique Disney touch. Fans will enjoy Disney character appearances and on-field fan experiences. The stadium also has a tradition of inviting the kids in the audience to run the bases after every game.

The Braves’ will play big name teams such as The Cardinals, Yankees, New York Mets and Philadelphia Phillies. The 18-game home schedule begins on March 3.

Individual game tickets for the Braves’ home spring training season are on sale through Ticketmaster (800/745-3000 and ticketmaster.com) and at the sports complex box office.

Game packages are also available for fans who want to see more than one game. The mini-packs are currently on sale and feature four separate three-game options in 2012. A new package called the “Pick ‘Em Plan,” allows guests tickets to four games including one Yankees, Cardinals or Phillies game, and three other non premium games of the fans’ choosing. For mini-pack tickets visit espnwwos.com/atlantabraves or call 407-939-4263.

Out of the Loop: Legoland California announces multi-million dollar 2012 expansion

NBA Board votes for season restart moving to...