Out of the Loop: Legoland California announces multi-million dollar 2012 expansion 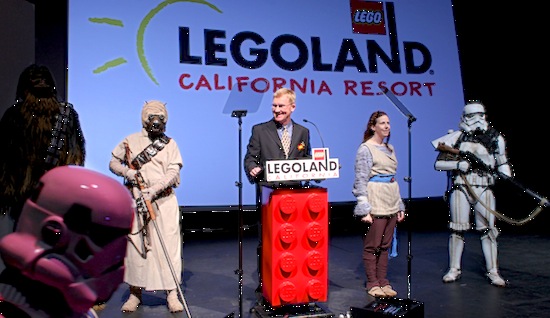 Carlsbad, Calif. – Last year marked the eighth straight year of increased attendance at Legoland California and a double digit increase at that over 2010. On the strength of those numbers, Legoland California has decided to put a multi-million dollar investment into the park.

Legoland California General Manager Pete Ronchetti attributes the continued growth to a continuous effort to expand the resort each year. Legoland’s parent company, Merlin Entertainments, is the second largest but fastest growing provider of visitor attractions in the world. In 2011 alone, they opened 14 new attractions worldwide including Legoland Florida.

Last week’s announcement follows last fall’s announcement that the Legoland California Resort would be adding a hotel, to be completed by 2013. [read about it Here.]

The expansion announced recently will open this year. Here is a summary of the projects:

Star Wars Miniland that opened in 2011 will add more Lego models to the existing scenes. There are scenes from each of the movies and another from the Clone Wars cartoon series. One of the examples given is the addition of a Jawa sandcrawler vehicle in the Tatooine scene. A Star Wars Gallery will also be added. This will include giant Star Wars mini-figures. Standing three feet tall, guests will be able to inspect the detail of a dozen Star Wars characters including Princess Leia, R2-D2, Han Solo, Luke and Anakin Skywalker, and others. These additions will debut March 29.

Millions of dollars have been invested into the Pirate Reef shoot-the-chute ride. Guests will battle each other with water cannons from pirate ships on the “high seas”. Each Lego pirate ship is 40 feet long and 20 feet high. The ships float down a waterway that leads to a 25-foot plunge. This plunge provides a splash for those standing on the main bridge to the attraction. Yes, this is a chance for guests to get completely drenched! When open, the attraction will be accessible from both the water park side and the dry park side. The Pirate Reef is expected to open May 24.

Jaws has closed forever at Universal Orlando, but guests to Sea Life Aquarium at Legoland California Resort will be able to visit the new “Claws” exhibit this year. This new interactive exhibit will include five displays. Some of the hard-shelled crustaceans will include the Japanese spider crab that can grow to 13 feet across and the coconut crabs whose claws are strong enough to open a coconut. The exhibit will open in this spring.

The Sum of All Thrills design-your-own-ride opens...