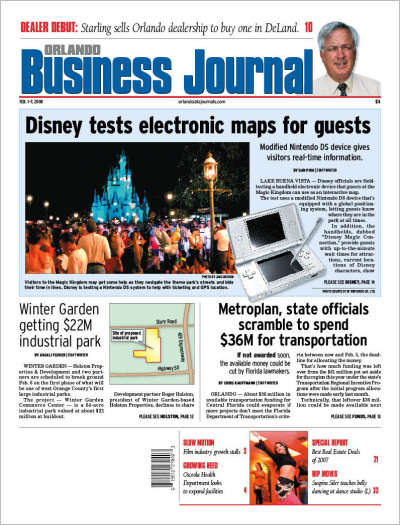 The new edition of Orlando Business Journal features a story on the cover about Disney’s testing of the Nintendo DS as a guide to the Magic Kingdom. (Which was first reported here on our blog on Jan. 10) Quoted in the article is our own Ricky Brigante. Thanks to reporter Dan Ping for contacting us. I’m not sure if that’s how he meant it to read, but the wdwmagic.com forum is not an official Disney forum.

As always, both Ricky and I are available for comment on any theme park or attractions news in the Orlando area. Hopefully you’ll see the magazine quoted as a source more in the future.

LAKE BUENA VISTA — Disney officials are field-testing a handheld electronic device that guests at the Magic Kingdom can use as an interactive map.

The test uses a modified Nintendo DS device that’s equipped with a global positioning system, letting guests know where they are in the park at all times.

The devices also reportedly contain Disney trivia and games to help guests — 16.6 million in 2006, according to estimates by Economic Research Associates — pass the time while in line for rides. In the future, they reportedly will allow guests to make reservations at theme park restaurants and obtain FastPasses.

Disney officials are mum on the tests, which began Jan. 21, according to multiple Disney fan Web sites, including the company’s own online forum, www.wdwmagic.com.

“It’s not something we are ready to talk about,” says Kim Prunty, Disney spokeswoman. “We’re always testing ways to improve the guest experience. It’s just too early at this stage to talk further about it.”

“It’s definitely the wave of the future,” says Baker, a former Disney executive and president of Baker Leisure Services, an Orlando-based theme park consultant. “We hear a lot of the parks talking about using this type of technology, especially the new parks.”

But with this new system, “they can update on the fly at no cost,” say Brigante, who also hosts the weekly “Inside the Magic” podcast.

Disney, in fact, has been a pioneer in the use of wireless systems in its parks.

And in 2003, Disney released Pal Mickey, a plush Mickey Mouse doll equipped with an internal antenna. At different locations in the park, Pal Mickey would activate and tell show times for nearby attractions, wait times for rides and the locations of characters.

What it is: A handheld Nintendo DS device that connects to Disney’s wireless system in the Magic Kingdom and serves as an interactive map

Cost: Pricing has not been established. During testing, the unit is free, though there is a $300 security deposit. Most expect Disney to rent the devices for a daily fee.

Star Wars: Return of the Jedi in...