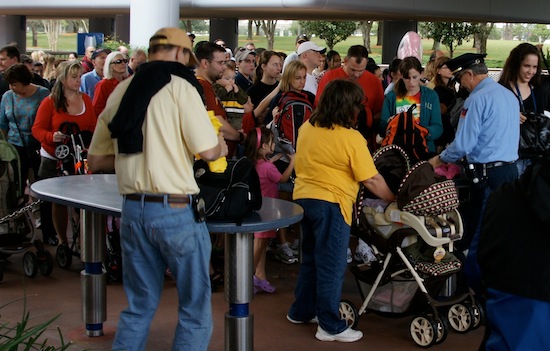 If you’re the sort who recognizes that vacations will simply be expensive, and hand over your credit card whenever asked (no matter the price) for food, then you’re exactly the kind of customer the Orlando theme parks are looking for. They want you to book immediately, by the way. But if you entertain thoughts about finding ways to subvert the expensive menu options, you are (A) in good company and (B) likely to be very interested in today’s topic.

There’s been much digital ink spilt about why exactly the prices have been inflating so fast in the Orlando theme parks, not just for tickets but for food. A leading theory espouses the view that the dining plans are to blame: all three major parks have pre-paid dining plans, which as a by-product, results in inflated prices in the a la carte menu (it makes the prepaid version look better). Other reputed byproducts include shrinking menu selections and an increasing generic nature to the entrees offered.

If any of the above had previously caught your attention, or if you were simply on a skin-tight budget, you’ve probably looked at what it takes to bring food into the parks with you. So here’s a thumbnail sketch of what’s allowed in the various theme parks.

Walt Disney World
For years, the Disney theme parks maintained a no-allowance policy: no food or drink was allowed to be brought in from the outside. This has gone very far by the wayside. Not only can you bring in snacks, you shouldn’t even feel you need to hide them. But wait, there’s more! Feeling the need to escalate beyond snacks and toward full-size meal replacements? Even this is allowed – unofficially, of course. They don’t advertise that you can bring food in, but they no longer forbid it by policy, and they don’t stop you during the bag check (indeed, the security officers probably won’t even comment).

In fact, the policy has gone so far in the other extreme that you can now bring in entire bags or even coolers, full of food. Not many park visitors are doing it (most feel that they want their vacation to be a time of non-penny-pinching), but every so often you’ll see a family unpack their bags in a corner to reveal a full loaf a bread, a jar of mayonnaise and several packets of deli meats.

Small soft-paneled coolers are not uncommon. People with access to freezers in their homes/hotels sometimes bring frozen gels packs to keep drinks cold. We use a dedicated backpack built to keep drinks cold, and we freeze bottles of water the night before. The ice melts slowly throughout the day, ensuring drinks are always cold. All of this costs but a fraction of the price of Disney drinks.

You can even drag along a roller-cooler in the park. This enables you to carry much more food and drink. Disney could change its policies at any point, but so far, they have no objection to outside food/drink. Their official policy is that coolers must be no larger than 24 inches long by 15 inches wide by 18 inches high.

Universal Studios and Islands of Adventure
The joint bag check for these two parks takes place at the parking structure, which is fortunate because you’ll be heading back to your car if you try to bring as much to Universal as you did to Disney. They have much stricter policies on the quantity of food and the size of the lunchbags/coolers. Only a much smaller bag, perhaps holding only two to three soda cans on top of a freezer gel pack, is allowed. We’ve found that very minor snacks placed with our diaper/baby supplies cause no additional comment, so there’s a good amount of leniency there.

Not to mention that “bag check” really is confined just to bags. At Universal as well as Disney, no one looks in your pockets, and it’s simple indeed to bring food in your cargo pants (at least long enough to clear security). We try not to do this at Universal – it violates the spirit of their policy, if not the actual letter of their law.

SeaWorld and Aquatica
The policies are even more restrictive at the SeaWorld parks, where outside food and drinks are essentially forbidden. The only exceptions are pre-packaged individual-sized snacks (think a six-pack of Oreos), and one assumes you can’t have an enormous quantities of these either. As a parent, it strikes me that they are trying to exclude food but still allow food for small children as an option, since young kids won’t eat a full sized meal and it’s often a waste of money to order one for them.

Shopping
If you do intend to bring in snacks (or full-sized meals) to the parks, you’ll need to stock up on supplies when you get here. There’s a Publix supermarket on U.S. 192 East (and a Target further east), but you’re well-advised instead to go to U.S. 192 West and locate the somewhat new Target Superstore, where they have variety and quality exceeding your other choices.

Somewhat closer to Disney’s property is the Goodings supermarket in the Crossroads Shopping Center (just outside Downtown Disney and Hotel Plaze Boulevard hotels on State route 535). Goodings is perpetually in dire financial straits and may close at any time. But if you get the chance, you should drop by to see what a tourist-zone supermarket looks like. Many of the normal foods and aisles are just plain missing; everything stocked assumes access to a refrigerator and maybe a microwave at most, and they have loads of snacks/drinks that are obviously intended to be brought into the parks. Go a little further down west S.R. 535 and you’ll find a Winn-Dixie grocery store with much cheaper prices.

Whether your destination is Goodings, Target or the other options, you’ll need transportation. They are all reached within five to 10 minutes from either side of Disney property. But if you didn’t rent a car on your vacation, there are no good alternatives for making it to these supermarkets (after all, the theme park hotels have good reason to make it hard for you to save money like this). I’ve seen many travelers shell out for a taxi at the start of the vacation, realizing that the expense up front is more than balanced by the savings they realize throughout the rest of the days in the parks. It’s something to consider, at least, on your next visit.

• Kevin Yee is a theme park enthusiast and author. He’s written seven books about Disney theme parks, including his most recent work, an interactive children’s book called “Your Day at the Magic Kingdom“. He visits at least two Central Florida theme parks per week and is now working on an upcoming book compiling all the best tips for a trip to Orlando. You can find out more about Kevin at his Web site ultimateorlando.com.

This was an excellent read. Makes me want to save some cash when going to the parks above my already slightly discounted annual pass prices and thoroughly overused souvenir cup refills.

To those that have a multi day pass or an annual pass the best thing you can do it get a souvenir cup for sodas and then get the refills. Bring the cup back again and again day after day, they don’t care. Also you can take your SeaWorld souvenir cup to Busch Gardens to get it refilled for the same refill price without buying a specific Busch Gardens cup.

What about water bottles? I have a few reusable water filtering bottles.. they are not big.. Can I use them at disney or seaworld?

Good helpful information but one statement neeeds clarification as not to confuse the visitors. The Disney policy is a bit off.

You state:
“You can even drag along a roller-cooler in the park. This enables you to carry much more food and drink. Disney could change its policies at any point, but so far, they have no objection to outside food/drink. Their official policy is that coolers must be no larger than 24 inches long by 15 inches wide by 18 inches high.”

Dragging anything is forbidden. Any container must be worn as a packpack, carried, or pushed in a stroller. The measurements you list are the maximum size of a rental locker to be sure anything you “drag” to the park can fit in the locker. Although you may occasionally see some guest drag things they are stopped and made to store, carry, or push the container.

You are correct in that Disney does not care what you bring in to eat or drink except no glass containers or alcohol. Plastic and aluminum containers are permitted.

Is this the same Kevin Yee that writes for Mice RAGE? Hmmm. Complain Whine Complain Whine then Repeat. I seem to remember him writing or should I say whining an article on the Disney Cruises NOT having a dark ride on their ships. As per MiceRage high school style of writing, it was sooo laughingly ridiculous that I refuse to take anything he says seriously. My advice Orlando Mag (and as a faithful subscriber) is to steer clear of these folks that are linked with Mice Age (or many folk call it, Mice Rage). They want 24 hour VIP status and benefits to theme parks, but write articles with a a shall we say, less than credible journalism. Come on Orlando mag, you guys can hire better writers than those that take pictures of chicken bones and trash on the grounds at Disney parks with the intent of posting it for everyone to see. That is the caliber writer you have here.

This story is by Kevin Yee. I only posted it. Kevin has been freelance writing for us for a couple of years both online and in print and we haven’t found any problems with any of the stories he’s written for us.

If this is true , sounds great for diabetics.

NICE rant, or whine as you’d call it, sd3. FAILed to notice the photo credit was Kevin Yee. The author, or whiner as you spouted, was clearly credited as Matt. Feel good to get that whine out of your system, considering your aim was so far off?

Maybe you should read the post again? I made reference to him as a writer for Miceage NOT for this specific article.. DUH! Pull your head out of your before you post.

This is good info, especially that I have celiac disease (I can’t eat any thing with gluten like bread and pasta). Now that I have a timeshare in Orlando, I’ll be able to prepare my food before! Is anyone can tell me if the lockers are full in January? Do I have to be in early at park opening at Disney World? Thanks!

Hi there, what about wagon can i bring them to the park.