This past Friday, members of the cast and crew of the latest addition to the Marvel Cinematic Universe, “Captain Marvel,” met with members of the press to talk about their upcoming film. 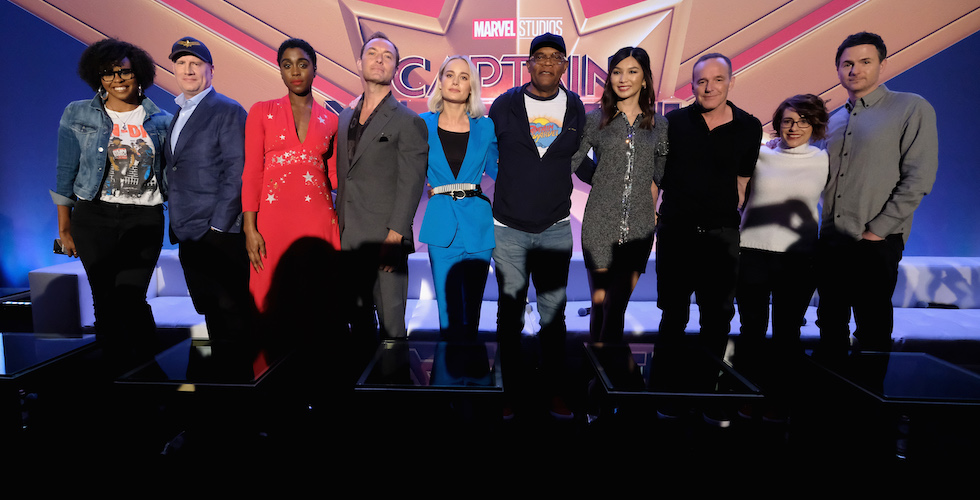 The cast of “Captain Marvel” recently gathered to share their thoughts on the upcoming film.

Outside of discussing what went into making “Captain Marvel”, the cast spoke about how they hoped that the film would spark more conversations about representation in film.

“Films like this that do end up going international […] It means you get to have a really extensive conversation with movies like this […] [It] allows all of us through the veil of metaphor of a film to be able to reveal some deeper truths and maybe empathize in a new way.” 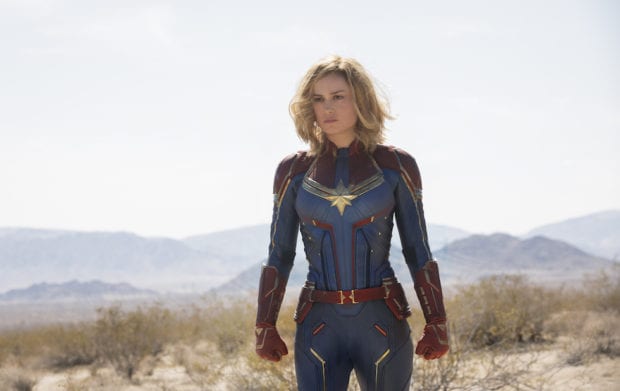 Actress Brie Larson spoke about how she approached playing the role of Carol Danvers, saying, “I was really excited to do this; in particular, the idea of playing a superhero, or a female superhero in particular because my interest is in female complexity.”

She also discussed her initial reservations about playing someone as powerful as Carol: “I was a little worried about playing somebody, a superhero that would be perfect – because I don’t feel like that’s realistic, or something aspirational at all. [But] getting to play a character where the whole character arc and turn of this is watching her be this major risk taker, which means it’s not always going to work out the best. And those are the moments, the defining moments of her character, where she doesn’t lay down, she gets back up. I mean, that’s everything.  That’s for everybody.”

Larson also revealed that training to play Captain Marvel was a difficult process. “I sobbed in the gym many times,” she said. “My trainer would be like, ‘oh, she’s crying again.’”

However, the tears and pain were all worth it. “We’re talking about, you know, what I learned from [playing Carol], it’s that I’m stronger than I realized,” said Larson. “Of course, this movie is assisted with the VFX, because I can’t personally shoot photon blasts […] But I can stand here and say that I am really strong.”

Actor Clark Gregg was asked about bringing fan-favorite MCU character Agent Coulson back to the big screen for the first time since 2012. “You know, they said, ‘Hey, do you want to come back? It’s the ‘90s. Cool soundtrack. Little origin buddy stuff with Sam. And they’re going to give you more hair and make you look younger. Oh, and Brie Larson is going to be Captain Marvel,’ and I was like, okay, where do I go?”

Gregg also talked about how excited he was to share the story of Carol Danvers with his daughters, saying “I’ve gotten the thrill of taking my young daughter to a bunch of Marvel movies, but I’m taking a 17-year-old young woman to see ‘Captain Marvel’ next week and I’ve never been more excited to take her to anything ever.” 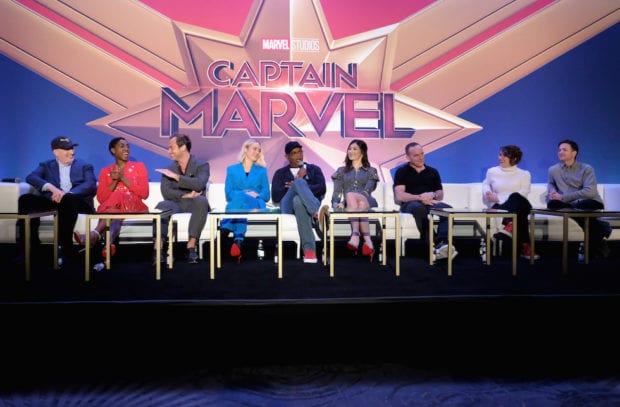 One of the mainstays of the Marvel Cinematic Universe, Samuel L. Jackson, returns in “Captain Marvel,” but with a twist, as this serves as one of his first big missions. Jackson describes his role in the film as “sort of a kinder, gentler, not so cynical world-weary, chip-on-the-shoulder Nick Fury.” He continued, saying “It’s kind of fun to not be the all-knowing, […] angry […] persuader that Nick Fury always is.”

Playing a younger version of Fury also came with another perk, the loss of the character’s iconic eyepatch. “[It was] even more refreshing to have two eyes, so I don’t have to cover one eye while I was learning my lines,” Jackson said.

“Captain Marvel” takes place in southern California in the 1990s, a decade which has recently been subject to a wave of nostalgia. In preparing to capture the essence of the time period, Co-Directors Anna Boden and Ryan Fleck immersed themselves in 90s culture.

“We made a big playlist at the beginning of the movie,” Fleck said, “and we shared it with the crew and some of the cast and […] some of those songs are in the movie.”

Other members of the cast were asked, given the film’s 90’s setting, what they would bring back from that decade. Co-Director Anna Boden said that she would bring back payphones, while Gemma Chan (Minn-Erva) wants to revive “Buffy the Vampire Slayer.” Samuel L. Jackson wants to bring back Laserdisc (“He is very passionate about Laserdisc,” said Brie Larson), and Clark Gregg just wants MTV to play music videos again.

“Captain Marvel” opens in theatres and IMAX on March 8, 2019. Check out the latest trailer for the film, as well as our video of the press conference, below:

Adventures by Disney to take travelers to...