A wave of news on Star Wars: Galaxy’s Edge has taken over the internet this week, and with it came new insight on the two attractions that will open with the land at Disneyland and Walt Disney World. 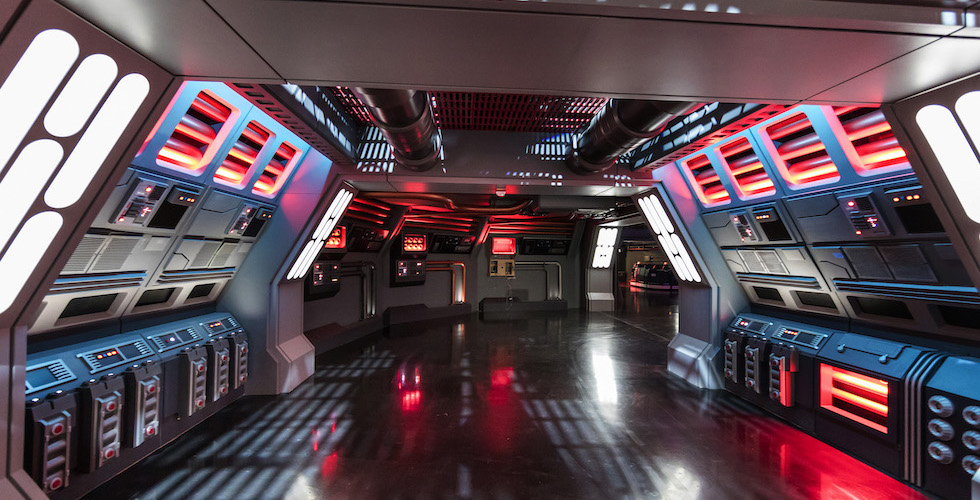 New details about the ride queues for Star Wars: Galaxy’s Edge have been revealed.

Entertainment Weekly shared a slew of new details of what guests can expect when riding Star Wars: Rise of the Resistance and Millennium Falcon: Smuggler’s Run, as well as a description of each attraction’s queue.

Check out our breakdown of these new details from EW for each attraction below:

Star Wars: Rise of the Resistance 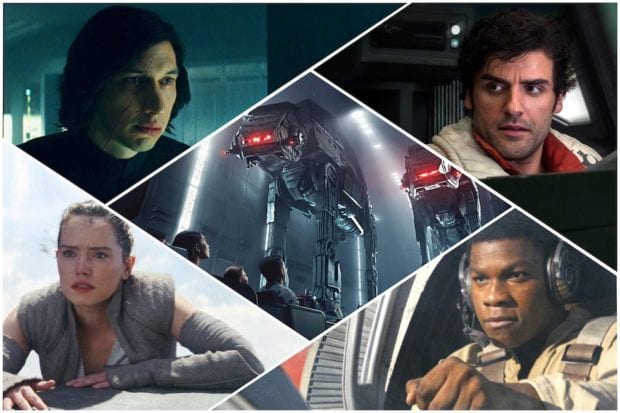 The queue, or wait line, begins under a cannon turret that forms an archway, leading to ancient ruins of Batuu. The ground will be hardened “mud” (read: concrete), where the footprints of Resistance soldiers and the tracks of R2-D2 can be seen. 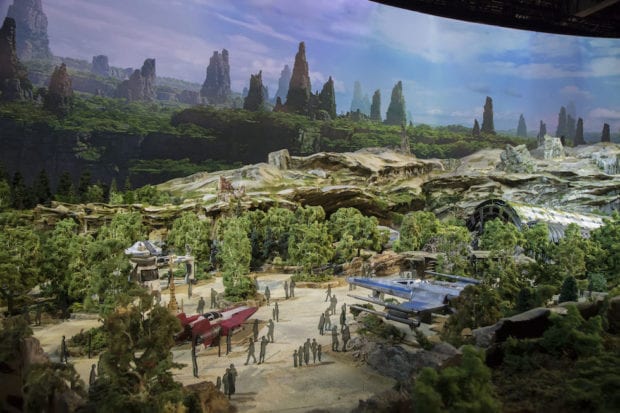 These tracks continue down a curved path until guests arrive at the caves currently being used as a base for the Resistance fighters. Inside, technology will line the cave walls, and guests will be able to hear transmissions that hint to an approaching First Order legion.

The caves will also feature “a dry aqueduct and shallow dips in the flat shelves of rock” that were once used to clean and wash materials, but are now “good for sitting.” At least guests won’t have to stand for the entirety of their wait to experience the attraction.

The queue will feature various interactive aspects that will be compatible with the Play Disney Parks app. In a later section of the line, guests can use the app to read the names listed on some of the Resistance X-wing suits, which are printed in the Star Wars language of Aurebesh.

Once inside the Resistance base, BB-8 will appear with a hologram of Daisy Ridley as Rey, who tells guests that they must board a transport for an important mission led by Poe Dameron.

After that, a bay door will open and guests will be hustled past Poe’s black X-wing and into the cargo bay of a large transport flown by an animatronicNien Nunb, the Sullustan alien co-pilot who helped Lando Calrissian blow up the second Death Star in “Star Wars: Return of the Jedi.”

Once inside the transport, guests will see Poe as he climbs into his X-wing and continues to communicate with riders as they lift off.

Unfortunately, the transport is then intercepted by a First Order Star Destroyer, and Poe is forced to retreat – but promises to return with help to save the riders. A tractor beam then pulls the cargo ship into the Star Destroyer, and the doors open to a giant hangar filled with Stormtroopers. 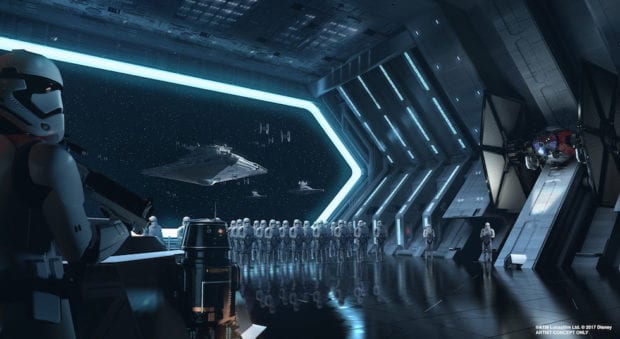 The Stormtroopers will be audio-animatronics, though they will have limited movement. Cast members operating the ride will guide guests out of the transport and through the Star Destroyer with the occasional “Move along, Resistance scum!” 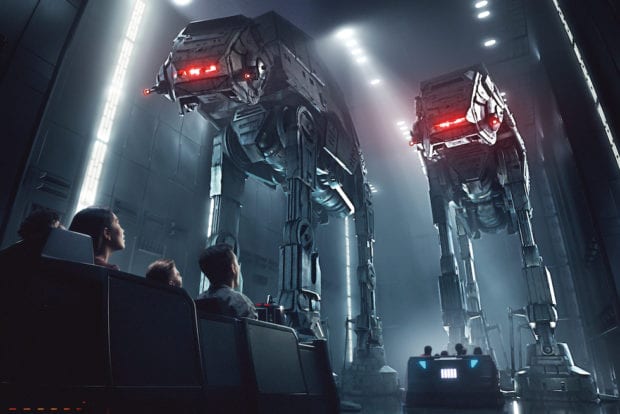 At this point, guests will enter an interrogation room similar to that from “The Force Awakens,” and then the real ride begins. EW’s description of the actual ride experience is spot-on to our previous Rumor Queue article detailing the ride’s storyline, which you can read for yourself here. 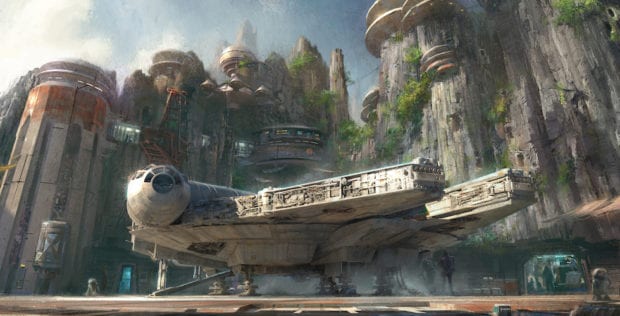 Once guests approach the ship outside the attraction, they’ll see that it’s definitely seen better days. The space freighter is covered with blaster burns and the thrusters are struggling to turn over. Guests might even see Chewbacca on the roof of the ship or crouching beneath the Falcon to work out some of its kinks.

The storyline for Millenium Falcon: Smuggler’s Run tells of a post-Han Solo Falcon, where Chewie and the space pirate Hondo Ohnaka have teamed up to refurbish the ship while using it to transport items and contraband through the galaxy.

Inside of the mountain behind the Falcon is a shipping operation where guests will wait to board the famous ship. Here, guests are no longer waiting to get on a new Disney Parks ride; rather, they are now freelance smugglers picking up jobs for Ohnaka Transport Solutions. 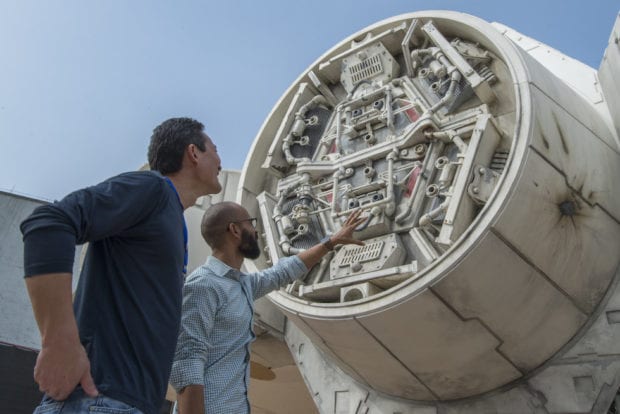 The queue for Smuggler’s Run will start at ground level and curve along the backside of the Falcon, giving guests a closer look at the ship. Everyone will then head up a set of stairs that lead to a catwalk above the mechanic shop, where other ships and engines can be seen under repair.

Narrow, triangular windows along the wall here will offer a unique, close-up view of the Falcon. Around the corner, the line comes to a bank of picture windows that showcase an unobstructed view of the top of the Falcon and the Black Spire Outpost village.

After heading back into the depths of the shipping center, the Play Disney Parks app can be used to scan shipping crates – revealing the contents of what Hondo is actually sending around the galaxy.

After this, guests will enter the control room, where they will encounter the space pirate himself, in the form of a highly-advanced A1000 animatronic. His dialogue is delivered in his signature Russian and Caribbean accent by voice actor Jim Cummings, who also provided Hondo’s voice in “Star Wars: The Clone Wars” and “Star Wars Rebels.” You can see how his animatronic will work in the video below:

The “windows” (screens) behind Hondo will show the Falcon rising up from its place outside and lowering down into an interior docking bay. Guests will then be led down a jet bridge and board the ship – arriving in the Falcon’s “Chess Room.”

At this point, guests will have already received one of three roles: Pilot, Gunner, and Flight Engineer. Guests will be gathered in groups of six and given a number; while waiting on their number to be called for takeoff, guests will be free to roam the Falcon’s cabin. 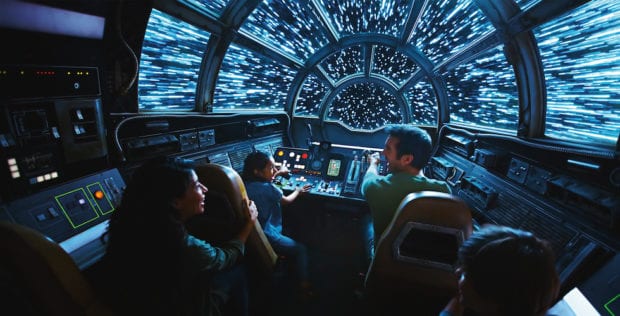 After being called to enter the cockpit, guests will set off on a “choose-your-own-adventure”-style experience, and try to keep the Falcon in one piece in the process.

Once the attraction ends, guests will head to the basement of the shipping center and exit outside – finding the Falcon parked right where they left it.

Your reputation after your first smuggling job will follow you through the land, thanks to the Play Disney Parks app, which will transmit your ride experience information throughout Galaxy’s Edge.

Star Wars: Galaxy’s Edge will open on May 31, 2019 at the Disneyland Resort, and Aug. 29, 2019 at Walt Disney World Resort. Stay tuned to our website for more news on this massive Disney Parks expansion.

Check out our latest updates on all things Star Wars: Galaxy’s Edge below:

Maybe coming to a theme park near...