In “Star Wars: Pirate’s Price,” schemer and smuggler Hondo Ohnaka shares tales of his adventures aboard the Millennium Falcon – which includes journeys to Batuu and Black Spire Outpost, the planet and area that guests will see for themselves when Star Wars: Galaxy’s Edge opens later this year. 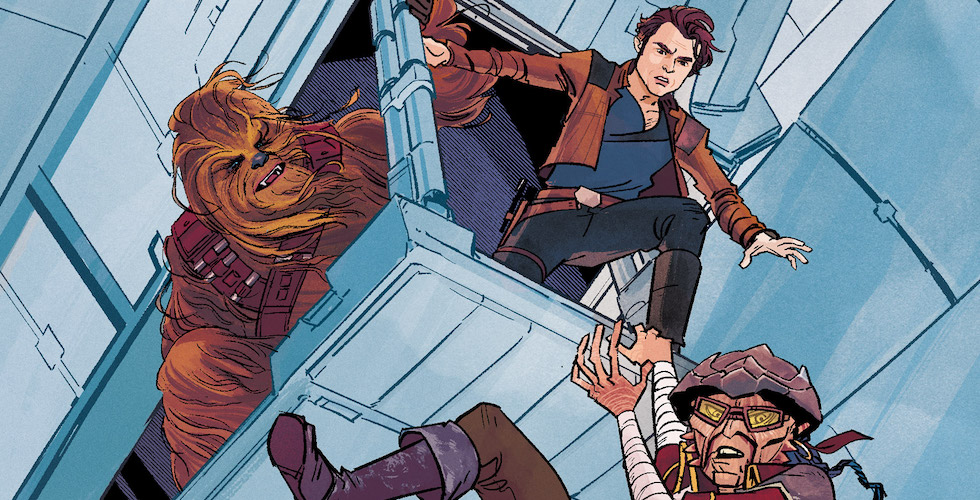 Read all about Hondo’s exciting adventures on Batuu in this new Star Wars story.

Here are the top five things we learned about Batuu and Black Spire Outpost from “Star Wars: Pirate’s Price,” as shared by Quinn Roseboom:

5. When Star Wars: Galaxy’s Edge opens this summer at Disneyland park and this fall at Disney’s Hollywood Studios, Oga’s Cantina will become the new watering hole for guests and scoundrels alike. In “Pirate’s Price,” the tap handles of the bar are made of old, worn out technology and parts like droid arms and even an antique lightsaber hilt. Will we recognize whose saber it is?

4. Patrons visiting Oga’s Cantina will be able to try various galactic beverages, including one named the “Fuzzy Tauntaun” and Gammorean Grog. Other food and drinks named in the book include Sarlacc Juice, Blue Bantha Buttermilk Biscuits, Blue Bespin Breakfast Bars, Blue Puff Cubes, Bantha Butter Pancakes, and Glowblue Noodles. Could we see the Bantha Milk Stand in Batuu serve any of these items in the future?

3. Fans of the original Star Tours attraction will no doubt remember RX-24, nicknamed “Captain Rex.” In “Pirate’s Price,” Rex has found himself a new job as the DJ for Oga’s Cantina. Travelers will find DJ RX spinning upbeat tunes daily in the bar.

2. In exchange for fixing up the Falcon for Chewbacca and Rey after the events of “Star Wars: The Last Jedi,” Hondo is given permission to use the ship as he kickstarts his new business, “Ohnaka Transport Solutions.” This explains why Hondo is in possession of the Millennium Falcon when guests visit Galaxy’s Edge.

1. Inside the cantina, a bulletin board can be found that reads “Flight Crews Wanted: No training necessary. Fair pay, great experience. Discretion is a must. Inquire at Ohnaka Transport Solutions in the Spaceport.” Could this be the premise for the Millennium Falcon: Smuggler’s Run attraction?

“Star Wars: Pirate’s Price” is the latest installment in the Flight of the Falcon series, and is great for readers of any age. You can pick up your copy now at Books.Disney.com.

Another Star Wars book that gives insight into Star Wars: Galaxy’s Edge is “Thrawn: Alliances,” now available at a bookstore near you. Even more details about Black Spire Outpost will be shared when a new comic miniseries arrives from Marvel Comics later this spring.