Could Batuu really be considered a smuggler’s planet without a cantina? Black Spire Outpost will be no exception, as the Disney Parks Blog announced new details on Oga’s Cantina, opening in 2019 with Star Wars: Galaxy’s Edge. 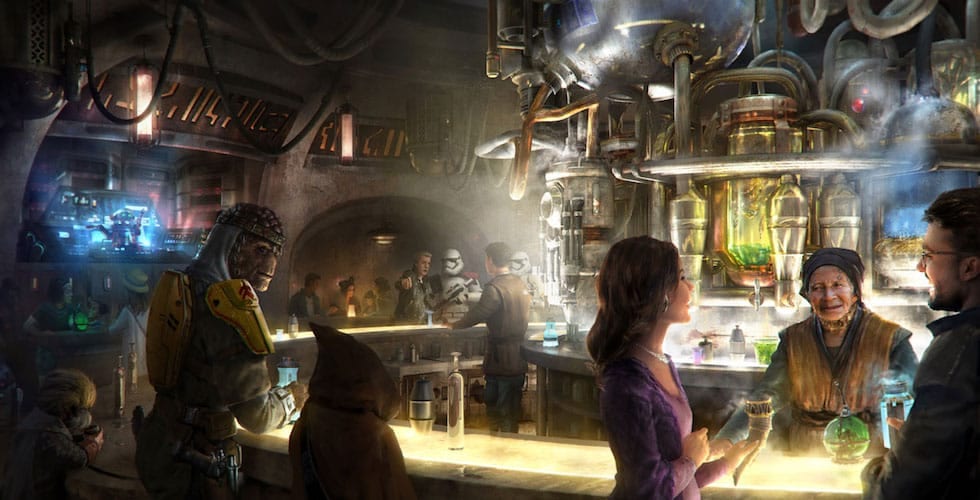 Visitors from all across the galaxy will come to this notorious watering hole to conduct their shady business, unwind, and maybe even encounter a friend or foe. Run by an alien propriety, Oga Garra, the cantina abides by a strict code of conduct to keep its patrons in check. But with its history of being a space pirates’ safe haven, you can imagine the stories this cantina can tell.

Oga’s Cantina will attract some of the most interesting characters in the galaxy. You never know when you might encounter a familiar face, or even a stormtrooper on patrol.

Patrons of the cantina can sample the famous concoctions created with exotic and otherworldly ingredients and crafting method, served in unique drinking vessels. Not to worry, there will be offerings for the kids in addition to the libations for adults.

Musical entertainment in the cantina will be provided by RX-24, the former StarSpeeder 3000 pilot droid that guests first met in Star Tours, who has a new job as the cantina’s DJ. Still as quirky and talkative as ever, he’s doing his best at his new job.

You’ll hear unique music, taste the most unique drinks in the galaxy, and be surrounded by a cast of characters that includes pilots, bounty hunters, smugglers, locals and galactic travelers. You’ll never know what could happen at this smuggler’s paradise.

Oga’s Cantina will open with Star Wars: Galaxy’s Edge in 2019 at both Disneyland Resort and Walt Disney World Resort.

Stay tuned to our website for more updates on Star Wars: Galaxy’s Edge.

New Halloween Horror Nights 2018 merchandise is to die for