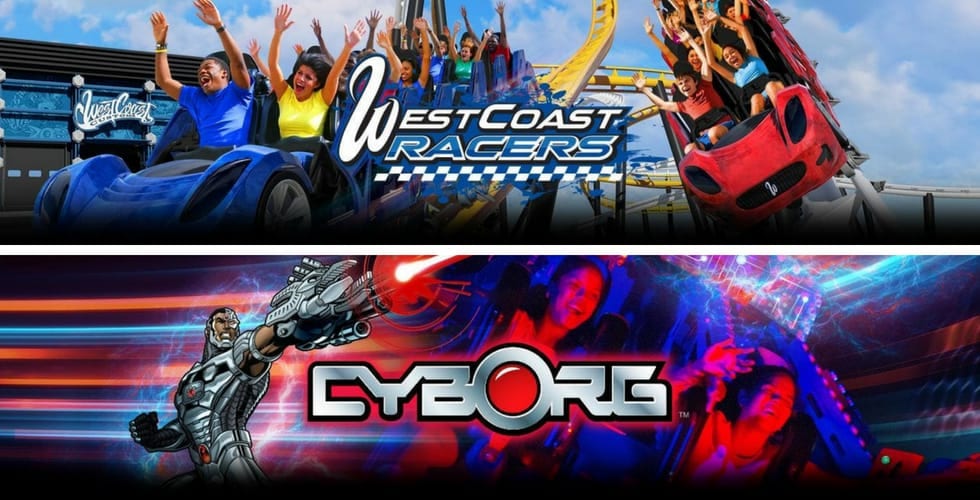 “Year after year, Six Flags raises the bar to deliver unparalleled, world-class thrills for guests of all ages. Our 2019 lineup is by far the most comprehensive package of innovative rides, record-breaking attractions, and superior guest benefits in the industry,” said Jim Reid-Anderson, chairman, president and CEO of Six Flags. “The addition of five new parks greatly extends the company’s national footprint and gives our ever-growing Season Pass and Membership base more opportunities to visit our parks to experience the world’s biggest and most thrilling rides.” 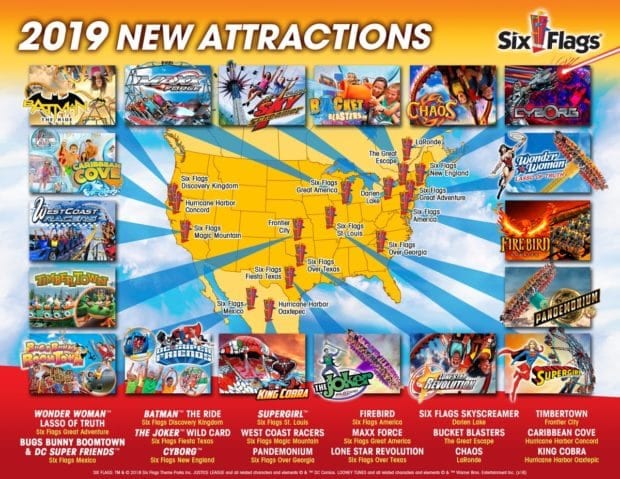 Here’s a look at all of Six Flags’ new additions for 2019 in one image.

Check out the full list of Six Flags’ new offerings for 2019 below:

The world’s first racing launch coaster is opening next year at Six Flags Magic Mountain. Designed in collaboration with West Coast Customs, this racing coaster will feature two side-by-side tracks with four high-speed launches. The race covers two laps, multiple hills for airtime, high-banked turns, and adrenaline-pumping over/unders and near misses. The ride also includes a real-time “pit stop,” designed by West Coast Customs. This will be Magic Mountain’s 20th roller coaster, which is more coasters than any other theme park on the planet.

One of the world’s tallest pendulum rides is coming to Six Flags Great Adventure, Wonder Woman Lasso of Truth. Standing at 17 stories tall, this spinning disk attraction will take guests up to speeds of 75 miles per hour as it swings back and forth at great heights. The pendulum will propel 40 riders in counterclockwise circles as their feet dangle from their flourless seats.

The fastest roller coaster launch in North America is coming to Six Flags Great America with Maxx Force. This roller coaster will accelerate up to 78 miles per hour in less than 2 seconds, have the highest double inversion of any coaster in the world at 175 feet, and feature the fastest inversion in the world with a Zero-G roll at more than 60 miles per hour. The coaster will also have one-of-a-kind custom coaster trains modeled after Formula 1 cars.

Themed after one of DC’s most iconic super heroes, this new coaster is headed to Six Flags Discovery Kingdom. Guests on this 4D wing coaster will flip head-over-heels at least six times as they travel on a tumbling journey with unexpected drops and vertical free-falls.

The tallest attraction in the state of New York is coming to Darien Lake, a new Six Flags theme park. Six Flags SkyScreamer is a giant, 242-foot-tall swing ride that will swing riders around at 35 miles per hour, giving beautiful views of the countryside below them. Darien Lake will be rebranded as Six Flags Darien Lake when it opens next spring.

Wet n’ Wild Splashdown in Houston, Texas and Wet n’ Wild Phoenix in Arizona will be rebranded as Six Flags Hurricane Harbor in 2019. Both of these water parks offer high-speed, thrilling waterslides and pools, along with kid-friendly attractions for families and younger guests.

Six Flags America in Washington, D.C. will launch Firebird in 2019, which will be the only floorless coaster in Maryland. This new experience will take guests through twists, drops and inversions, all while seated in floorless trains. Firebird will take off with a nine-story drop, and feature two inversions, high-banked curves, high-speed carousel and corkscrew rolls, and an incredible figure-eight finale.

Six Flags Fiesta Texas will debut the tallest and fastest spinning pendulum ride in the world with The Joker Wild Card. Named for DC’s most iconic villain, the attraction will stand at a record-breaking 17-stories tall, and reach speeds up to 80 miles per hour as it whips back and forth and climbs higher in the sky. This new spinning ride will be the centerpiece of a newly-themed DC Universe area.

Six Flags Mexico is announcing two new sections to their park, which will feature 14 rides and attractions, including six new themed rides. These kid-friendly areas will be perfect for thrill-seekers in training.

Six Flags Hurricane Harbor Oaxtepec, Latin America’s thrilling water park, will introduce an intense new racing slide, King Cobra. This slide’s unique design will allow guests to race through two tubes in a circular path with twists, turns, and surprises, with both enclosed and open sections of the slide. Guests will have to race to the finish, where it looks as though they disappear into the mouth of the cobra.

Six Flags Over Texas will open the world’s largest loop coaster in 2019, Lone Star Revolution. Standing at 100 feet in the air, this record-breaking coaster will take riders forward and backward on a gigantic loop before suspending them upside down for an extended period of hang time. Guests will travel in “face-off” seating positions and swing through 360-degree revolutions before heading downward in the opposite direction.

Six Flags New England will debut the high-tech Cyborg attraction, inspired by the DC Super Hero. This attraction is a new dark ride experience, where Cyborg invites guests to S.T.A.R. Labs to see a new technological device – but suddenly a sentient cybernetic system called The Grid hacks into the mainframe and takes control of the lab.

Guests will find themselves caught in the middle, spinning through the air as Cyborg tries to regain control of the machine.

Frontier City in Oklahoma will introduce a new kids’ area called Timber Town. The area will feature four new attractions designed for younger guests, along with new theming and re-imagined updates of the original children’s rides. Characters like Bucky the Beaver, Hootie the Owl and Bubba the Bear will be on hand for meet-and-greets with guests.

Six Flags Over Georgia will launch a new high-flying attraction, Pandemonium – the tallest swinging pendulum ride in the southeast. This ride will swirl and spin through the clouds at 15 stories in the air, reaching speeds up to 70 miles per hour. This attraction will be the centerpiece of the park’s new ScreamPunk themed area, which will feature revamped food and shopping locations. ScreamPunk is Six Flags’ take on the popular steampunk culture.

La Ronde in Quebec will introduce a new giant loop roller coaster, Chaos. This coaster will send riders forward, backward and upside down on a 7-story loop through a series of multiple revolutions before changing directions.

Six Flags St. Louis will send guests soaring with the new Supergirl attraction. Taking from the DC Super Hero’s powers of strength and stamina, guests will fly nearly 7 stories high in open-air vehicles as they spin and tilt while suspended from the ride’s massive wheel. The ride is raised into the air via a giant arm as guests are launched into a high-speed spin, feet dangling as they go around and around, higher and higher.

These new attractions aren’t the only additions for Six Flags. This fall, Six Flags will see the return of their Halloween event, Fright Fest. This year, the fear is taken to a new level with custom-built haunted attractions based on the new movie from CBS Films, “Hell Fest,” in theaters Friday, Sept. 28.

Just in time for the holiday season, Six Flags Great America and Frontier City will join 11 other Six Flags parks in celebrating Holiday in the Park. This popular holiday event features a winter wonderland filled with all the sights and sounds of the season, with holiday-themed shows and seasonal treats, as well as select rides and attractions set to the backdrop of millions of glittering lights.

To learn more about all of Six Flags’ new offerings for 2019, visit SixFlags.com.

“but suddenly a sentient cybernetic system called The Grid hacks into the mainframe and takes control of the lab.”

Did somebody just say Grid? I’m pretty sure I heard somebody say Grid. Cyborg is hot and all, but Grid adds another level of hotness (even though Cyborg is hotter.)