Sixty years ago today, one of the most famous Disney animated films was released in theaters: “Sleeping Beauty.” 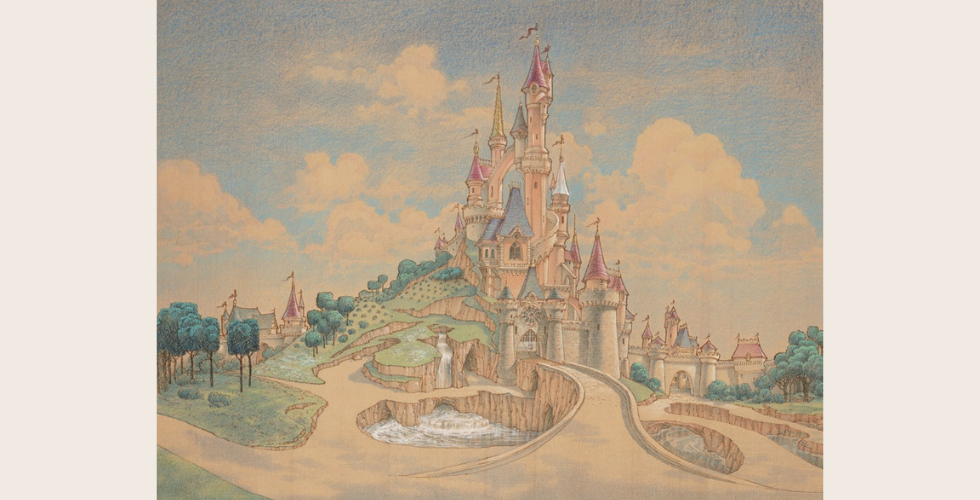 After 60 years, the influence of “Sleeping Beauty” can be found in Disney Parks all over the world.

The castle in the film is still one of the most recognizable icons of many Disney Parks, starting with Disneyland park in California – which opened four years before the film released. 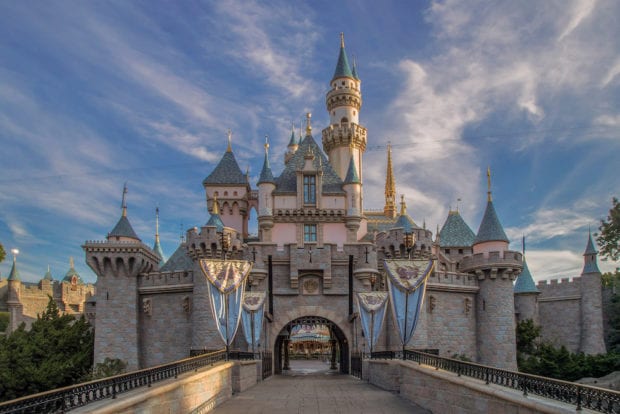 When Walt Disney began planning his theme park that would become Disneyland, he had plans to erect a fairytale castle. The version that now sits in Anaheim is based on European castles, specifically that of Neuschwanstein in Bavaria. As one of the smaller castles in the Disney Parks, Walt used forced perspective to make the structure look bigger than it really is. 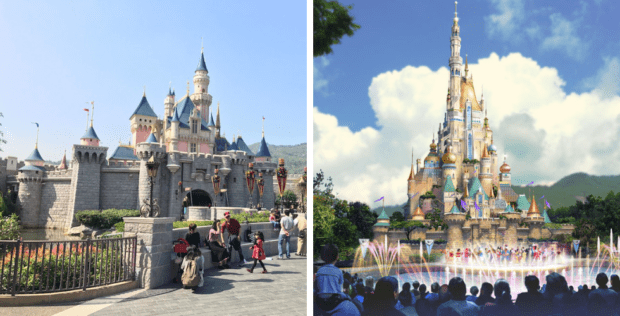 A look at Hong Kong Disneyland’s Sleeping Beauty Castle before its re-imagining (left), and concept art depicting the new look for the castle (right)

The castle would go on to be recreated for Hong Kong Disneyland in 2005, which is now undergoing a lengthy re-imagining as part of a park-wide transformation. 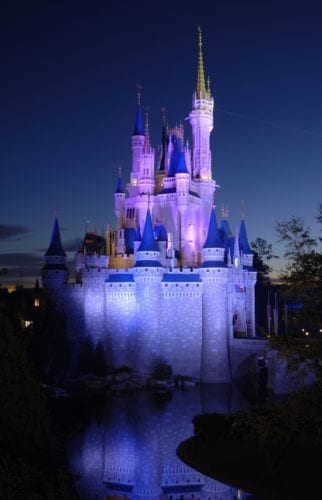 Cinderella Castle at Walt Disney World’s Magic Kingdom and its twin at Tokyo Disneyland are inspired by European castles as well, including the castle of the Loire.

For Disneyland Paris, Walt Disney Imagineering returned to the idea of Sleeping Beauty Castle, but wanted to build something different than the castles found in Europe. By using many different architectural, natural, and whimsical elements, Imagineers created a unique and timeless structure that many say is the most beautiful of all the Disney castles. 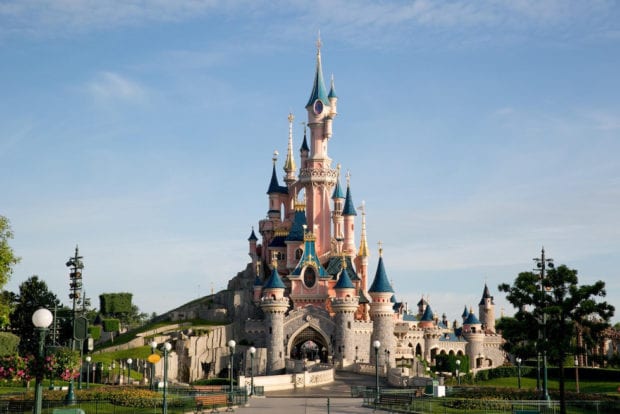 The design of Disneyland Paris’ castle is partly inspired by illustrations from the book “The Very Rich Hours of the Duke of Berry,” which also influenced the drawings of Disney artist Eyvind Earle for the “Sleeping Beauty” film.

Cube-shaped trees, similar to those in the animated film, are grouped around the castle in patches of three or four, and vary in height from 6 1/2 – 16 feet. Disney topiary artists specifically chose Arizona cypress and yew trees to create the dreamy landscape.

Above the entrance to the castle is a “polarized” window. A polarizing filter rotates behind the oval window, creating kaleidoscopic effects underneath the tinted glass. The stained glass window depicts the gifts given to Princess Aurora by the fairies during her baptism: a rose and a couple of doves. At the top of the main tower, an oval stained glass window is lit, symbolizing Princess Aurora’s presence in her castle. 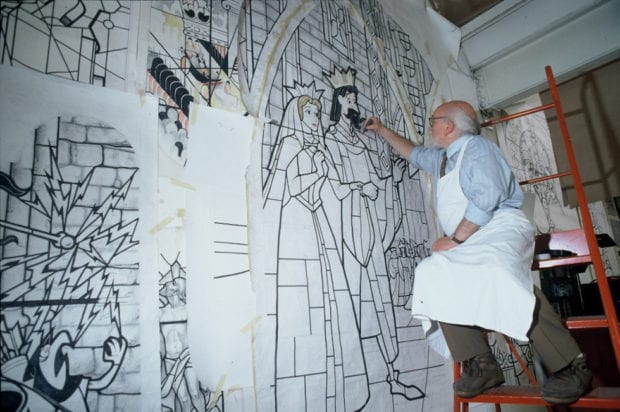 Characters from “Sleeping Beauty” can be found inside the castle through figurines or bas-reliefs, as well as in stained glass artwork that can be seen both inside and outside the castle. 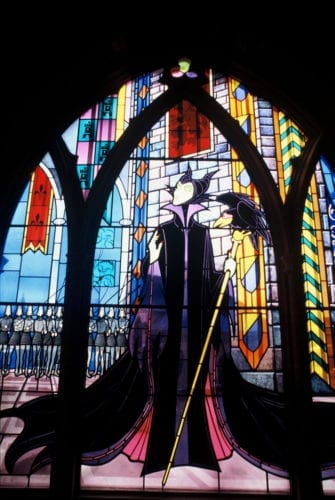 The squirrels, birds, Maleficent’s raven, and the three good fairies Flora, Fauna, and Merryweather are featured in many architectural details, as well as in the stained glass windows and tapestries of the Sleeping Beauty Gallery on the first floor.

Outside at the foot of the castle is the Castle Stage, which serves as a stage for theatrical shows featuring various Disney characters. 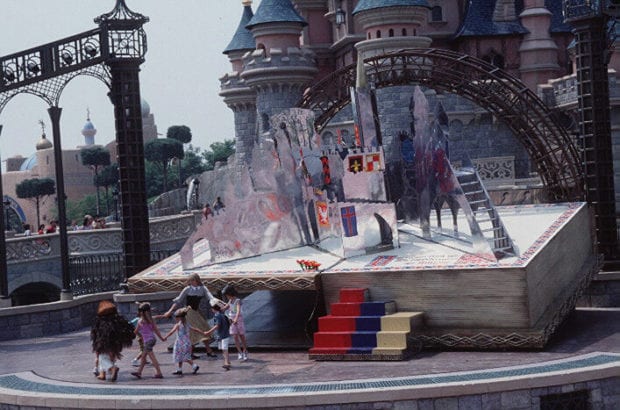 A look back at the first production to ever be featured on Disneyland Paris’ Castle Stage.

The first production to ever be held on the stage was the story of “Sleeping Beauty.” The stage was based on the model of those found in French gardens of the 18th and 19th century.

Upon entering the castle, guests may recognize many different songs, like “When You Wish Upon a Star” or “Once Upon a Dream.” New orchestral arrangements were recorded specifically for Disneyland Paris. 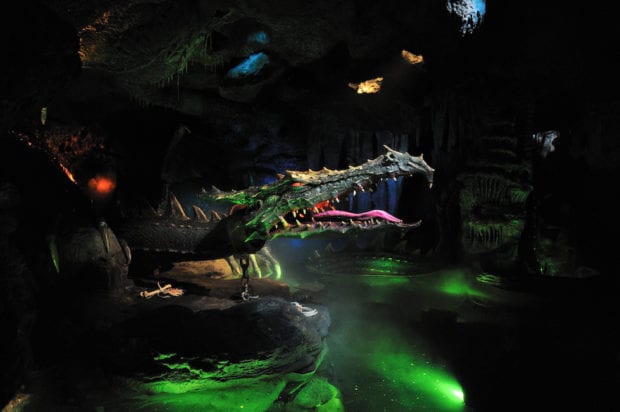 Sleeping Beauty Castle at Disneyland Paris stands at 141 feet high and weighs 15 tons. When the park first opened, the dragon underneath the castle was the largest Audio-Animatronic in the world, towering at 10 feet high, 79 feet long, and weighing 5,000 pounds.

Like all of the Disney castles, Sleeping Beauty Castle is oriented to the north – ensuring the sun never goes behind it and keeps guests from snapping the perfect photo from Main Street, U.S.A.

Which Disney Parks castle is your favorite, and why? Do you have a favorite moment from the “Sleeping Beauty” film? Let us know in the comments below!