Work continues non-stop on the Black Spire Outpost in Star Wars: Galaxy’s Edge at Disney’s Hollywood Studios, (phew, what a mouthful). We have seen the skeleton of the Millennium Falcon structure, but now outer theming elements are coming up. 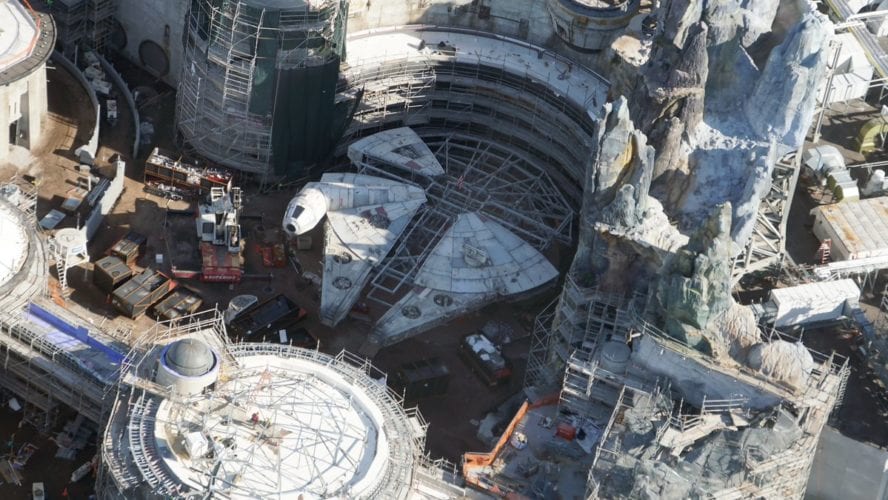 This photo report, with shots provided by contributor @bioreconstruct, takes a look at the nearly-finished Millennium Falcon and Black Spire Outpost.

First, let’s set a rumor to rest. From everything we’ve heard, Star Wars: Rise of the Resistance will not be a 28-minute ride. The total time of pre-shows, the detailed queue, the grouping area and the ride itself may add up to 28 minutes – but none of this has been confirmed, nor even suggested by Disney. To read all the details we’ve heard about Rise of the Resistance, click here. (Possible spoilers ahead.) 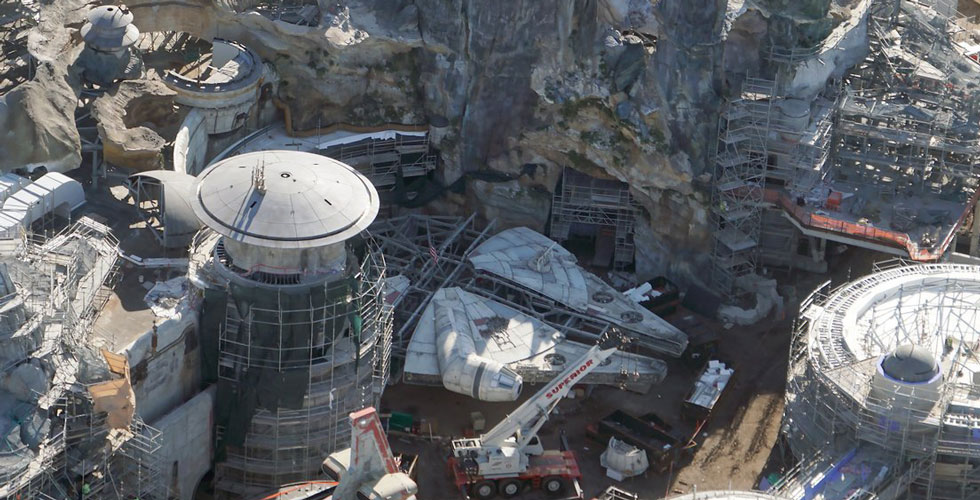 As you can see, the Millennium Falcon is almost here. Much of the rock work in the area is also complete, or nearly complete. Take a look at the entrance into the cave, which is located right behind the current Millennium Falcon work. 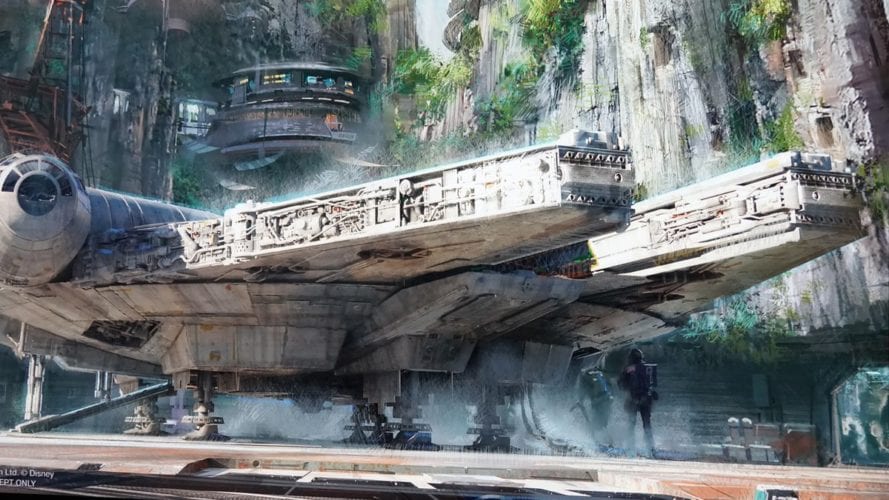 @bioreconstruct pointed out the entryway into this cave and that it matches the concept art for the Millennium Falcon attraction. We could be looking at its entrance or exit. Rumors have pointed to a gift shop being located right next to this area, which would suggest that this is the exit for Millennium Falcon: Smuggler’s Run.

This similar photo was tweeted just nine days before the current photos you see here. You can see the amount of work that has passed, as well as a look at the construction of the Millennium Falcon’s cockpit.

Back to the most recent photos, this second angle gives another great look at the Millennium Falcon’s theming. It also showcases the excellent rock work in the mountains. 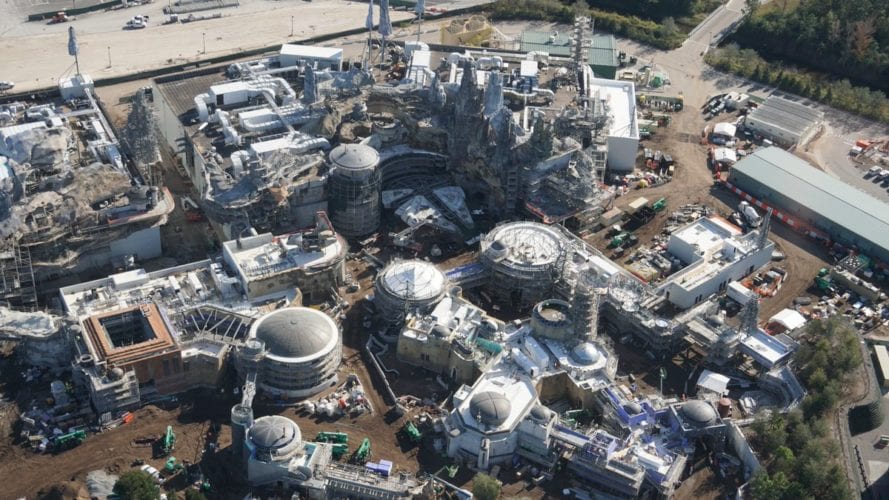 Zooming out, we can see about 70 percent of Star Wars: Galaxy’s Edge. The bottom of the photo leads to Toy Story Land. The right side of the photo is all backstage areas. The left side would lead to the Rise of the Resistance ride and the land’s entrance from Grand Avenue. 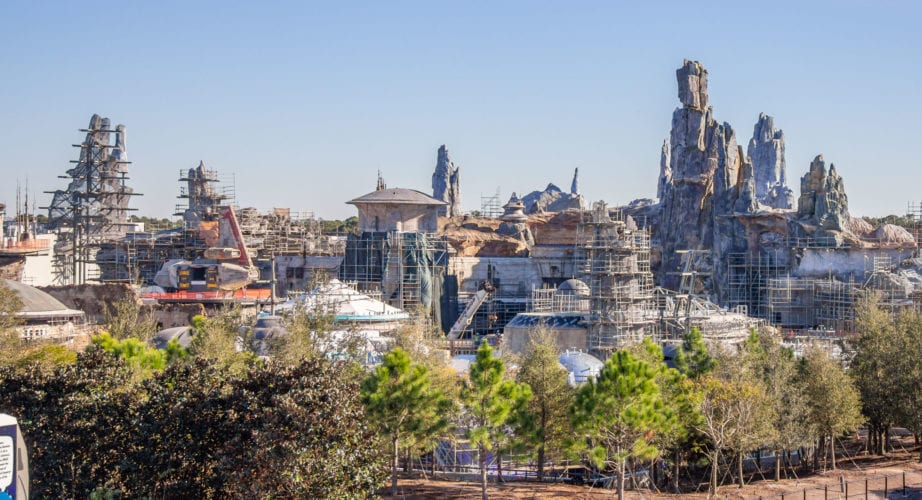 This view, taken from the Slinky Dog Dash ride in Toy Story Land, shows the same buildings from a closer-to-ground level. The highest point of the entire land will be the petrified tree spire over the Millennium Falcon: Smuggler’s Run show building. It’s also easy to see how the tree-covered berm will help hide the rest of the park from the sunken in sections of the Black Spire Outpost. On the far left side, we can see a new spire being constructed. 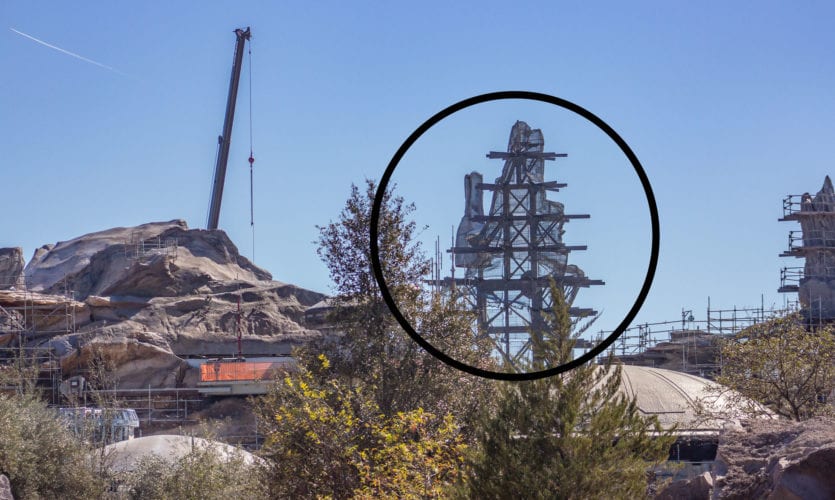 This spire is (thankfully) being built in front of the current floating spire. It is currently unknown if it will be dark grey in nature, like most of the spires, or if it will be like the colorful spire to the left. 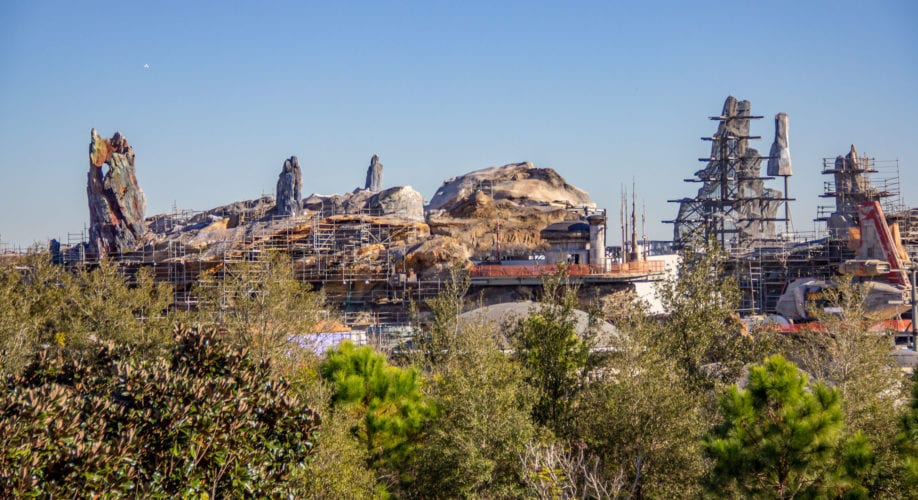 The colorful spire, seen here, resides directly above the Star Wars: Rise of the Resistance attraction. This spire quickly became a point of interest and made huge progress in a relatively short amount of time. 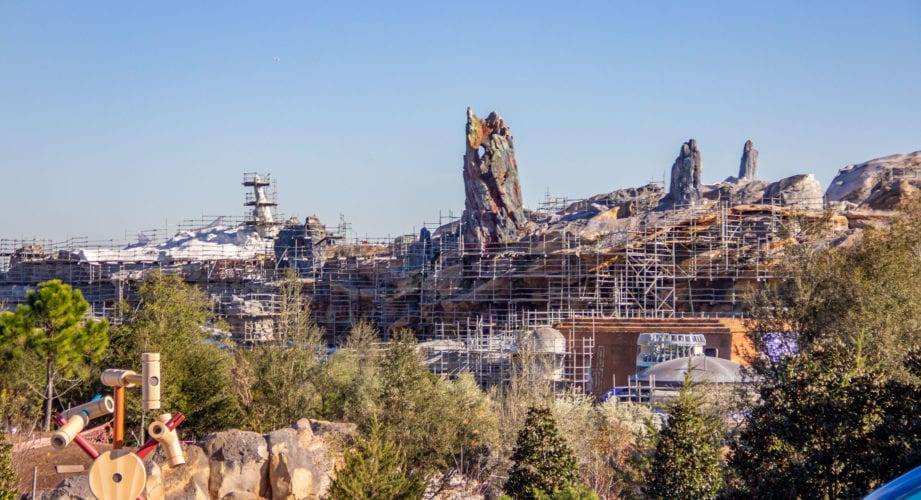 More spire theming is being finished on the far left side of this photo. This is most likely the last major area of mountainous spire construction we’ll see. The bottom left side of the photo showcases some of the tan, rocky entrance that will lead guests into Galaxy’s Edge from Toy Story Land. 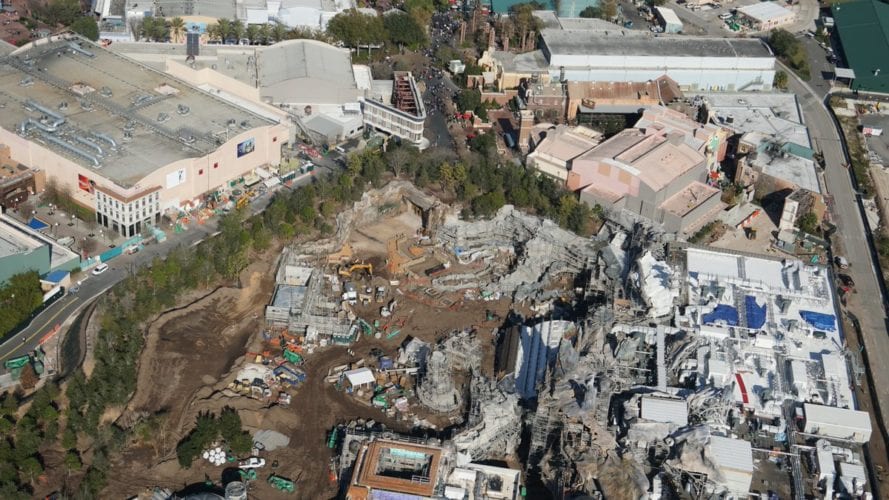 This area will be the Resistance base that is hidden outside of the main city portion of Black Spire Outpost. It will also be the entrance from the Grand Avenue area of Disney’s Hollywood Studios. Eventually, a set of X-Wings will be placed among the coves of the tree covered area near the pink Muppets show building on the right.

It’s important to point out the absolutely colossal size of the Rise of the Resistance show building. Numerous green cranes can be seen in the dirt and they pale in comparison to the structure on their right.

This view, as seen from the other side of the same construction area, helps showcase how the entrance into the land will be much more open than the center city area. This section will have a Resistance Turret, two X-Wings, and a blue transport ship. It will also be the entrance to Star Wars: Rise of the Resistance.

While it is not confirmed, it is possible the small building on the right will mostly be a storage area for supplies. 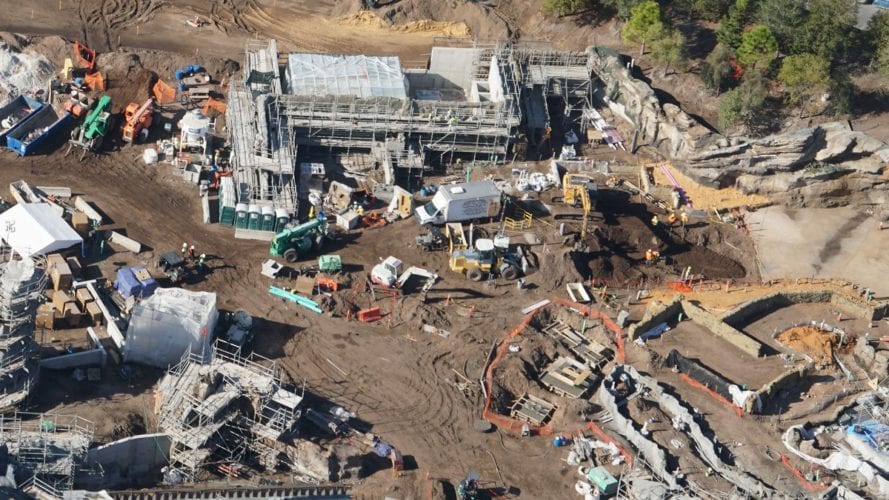 While the exterior may offer some substance to guests, this is most likely not a major part of the land. Using the vehicles to show off the scale, it is easy to see that Disney wants to make highway style pathways in this area. With tens of thousands of guests likely to visit a day, large and open pathways like this are essential. 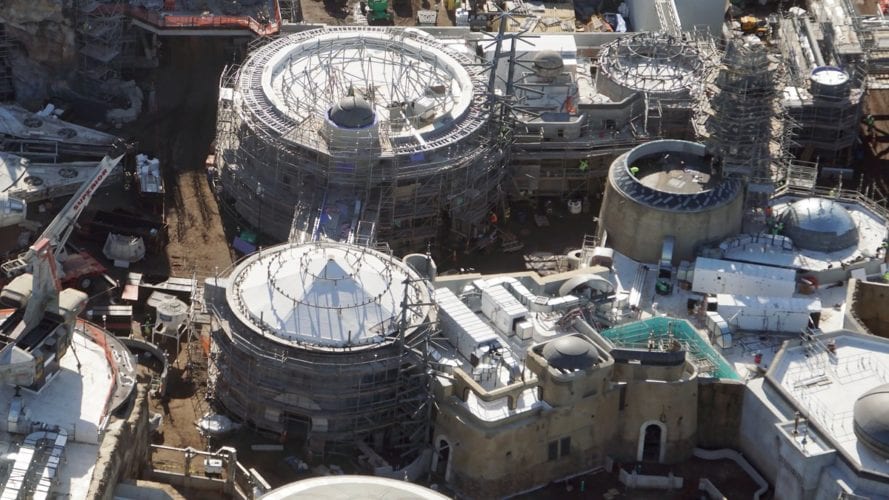 Looking back to the center of the Black Spire Outpost, we can see that a lot of theming has been finished on the tan building. This section is rumored to be the bar and restaurant in the land. The larger domed building in the back is rumored to be one of the main merchandise areas of the land.

Slightly hard to see, the scaffolding-covered spire on the top right of the image is rumored to be the official Black Spire of the land. We’ve heard this will be one of the main photo ops of the land and that some form of Disney PhotoPass will be available. 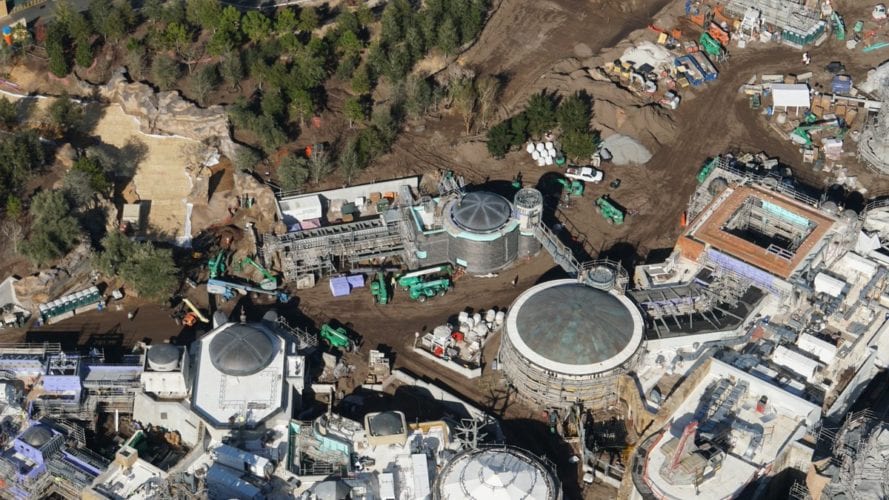 The tan walkway on the left will be the entrance from Toy Story Land. Much like with the opening of Pandora: The World of Avatar, this will likely be an exit for the first few months until the initial crowds become more controllable. The open roof section on the right will be the main marketplace area of the land. It will lead into the large domed structure, which is rumored to be the main quick-service area of the land.

It has been stated before, but it’s still important to mention that guests will most likely not have access to the second floor walkways seen around the land. These viewpoints would likely destroy the immersion of the land. Instead, it is possible that cast members will use these as an easy way to move food and merchandise without going through the crowded walkways.

Be sure to check out our previous Star Wars: Galaxy’s Edge photo updates below:

Hope it opens in October, if not I have to postpone til next year ☹️