Star Wars: Galaxy’s Edge has been under construction for years. While we have covered the construction process for a while, this past year has shown major progress. This construction article focuses on the major milestones and changes since one our first aerial construction tours, one year ago today. These photo reports are only possible because of the shots provided by @bioreconstruct on Twitter. All photos showcased are his, unless noted otherwise. 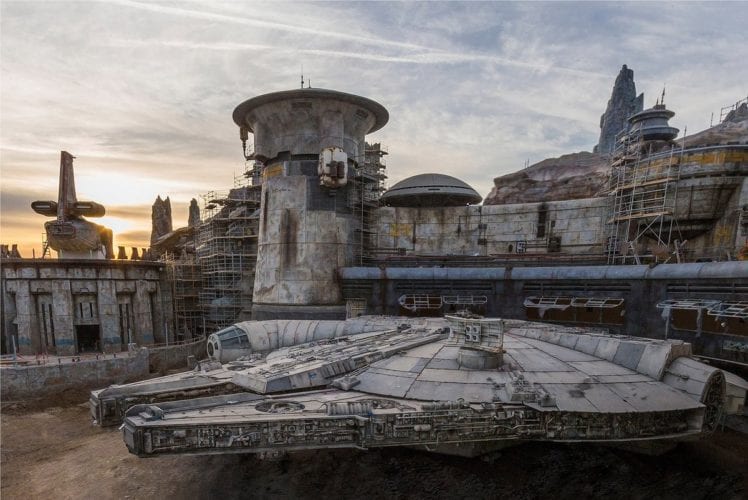 The Millennium Falcon has completed construction in Disneyland, pictured above. While this article will focus on the past yearly updates at Walt Disney World, we can expect a sight like this soon as the parks will be copies of each other. 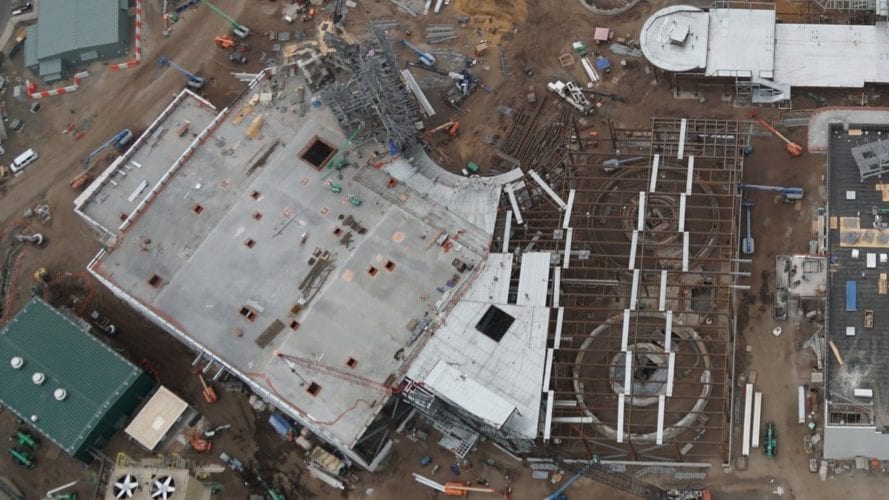 One year ago we were trying to understand these large turn tables. We had guesses that this area would be focused on the Millennium Falcon, but we were unaware of the attractions name or how the ride would pan out. 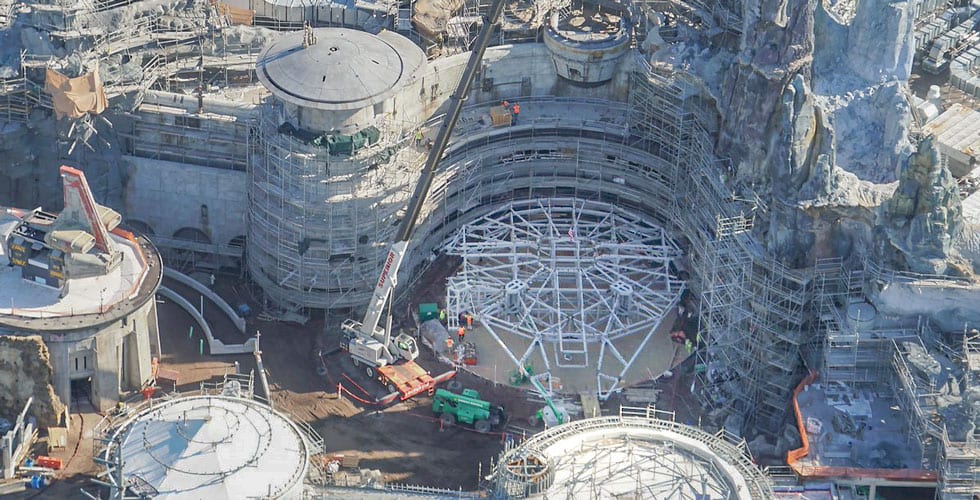 This GIF is compiled of two photos, one from January 27th, 2018, the second from December 7th, 2018. Numerous new structures have been added, and major rock work is nearly complete. The main domed structure, bottom left, has finalized major construction and is now down to theming elements for its exterior. 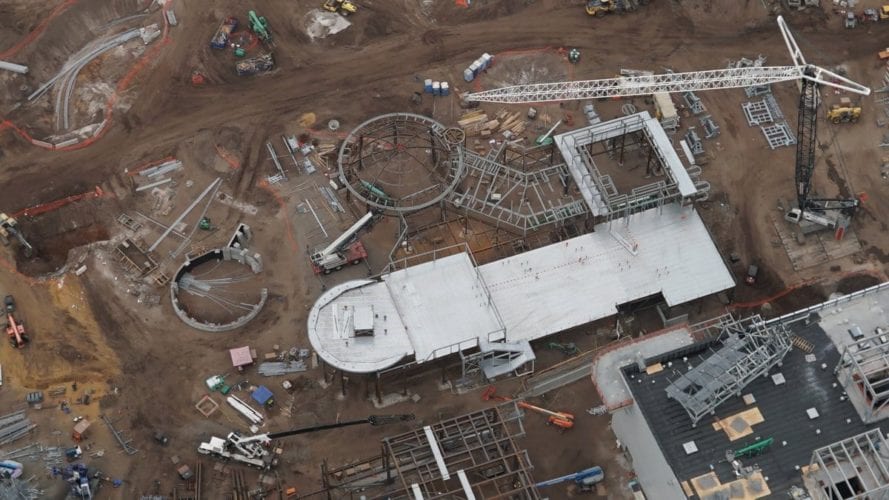 This dome structure with the open-top roof walkway has been a main focal point since the very beginning. It is the center point of the entire area, and was long rumored to be the main eatery for the land. 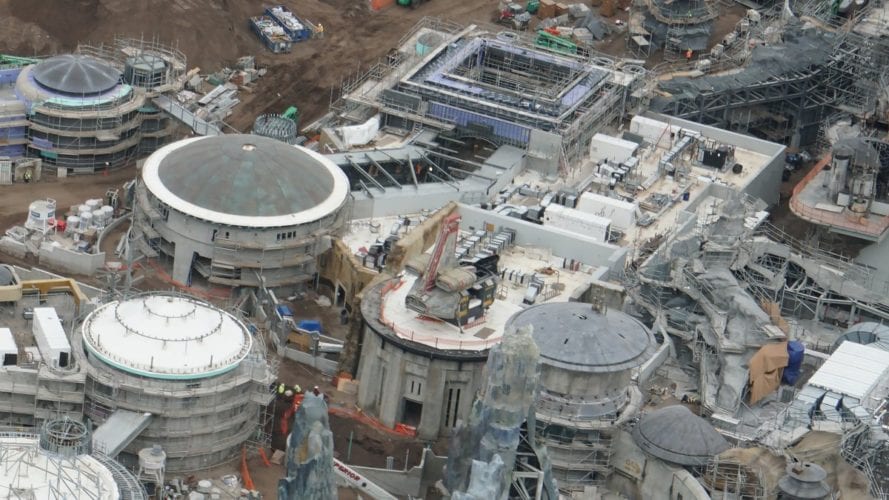 Now, this dome shares the roofline with the first spaceship we ever saw in Star Wars: Galaxy’s Edge. According to trading cards given out during Star Wars Galactic Nights, we know this spaceship is a food freighter. 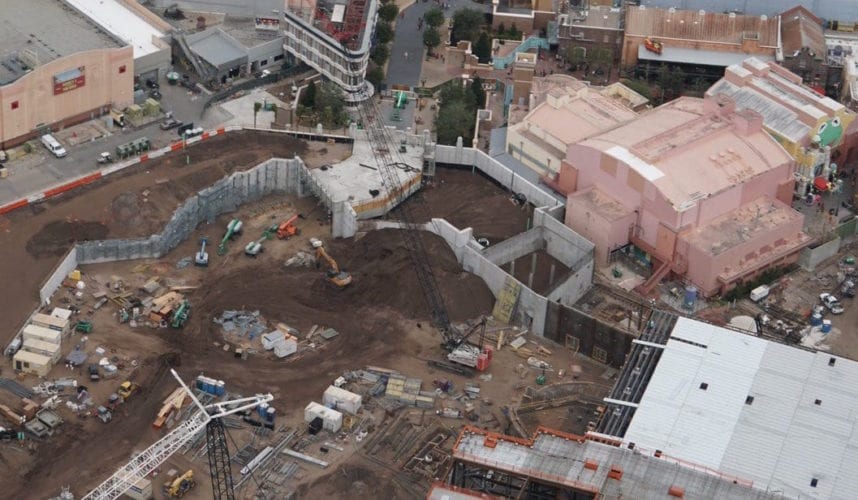 A year ago we could still see the underground walkway that will lead guests into Star Wars: Galaxy’s Edge from the Grand Avenue area of Disney’s Hollywood Studios. This route is set up much like the reveal of Diagon Alley at Universal Studios Florida. The sharp turn will hide the land from other sections of the park, making the reveal that much more grand. We also had not yet seen any rock work happening on this side of the land. 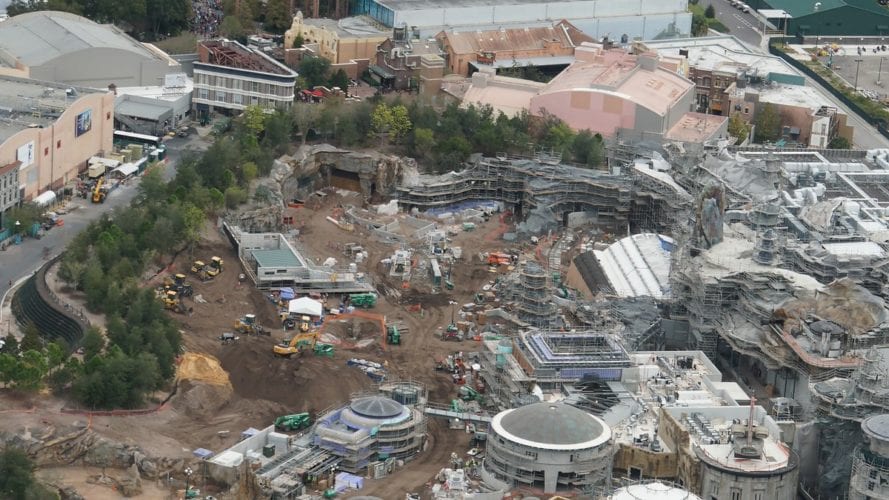 Now, the walkway is very well hidden. The tree line also hides much of Galaxy’s Edge from Grand Avenue. The rock work has taken huge steps since last year. The Rise of the Resistance show building is nearly fully covered in rock work or other forms of theming.

Steel, dirt and large roadways have transformed into the makings of a thriving city. We also now know that this city in Star Wars: Galaxy’s Edge will be named the Black Spire Outpost and that it will be based on the planet of Batuu. 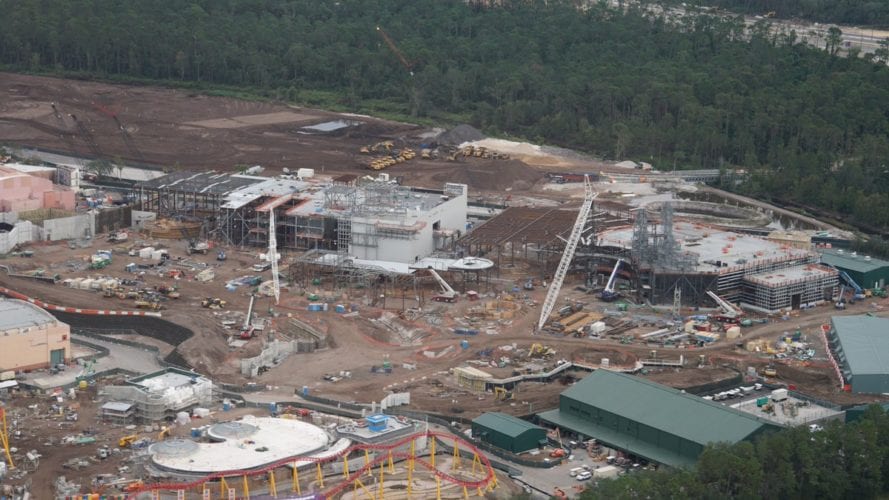 This photo is one of the first, dating back to November 23, 2017. Toy Story Land construction can be seen in the foreground. At that time, even the expanded parking lot was nothing but dirt. 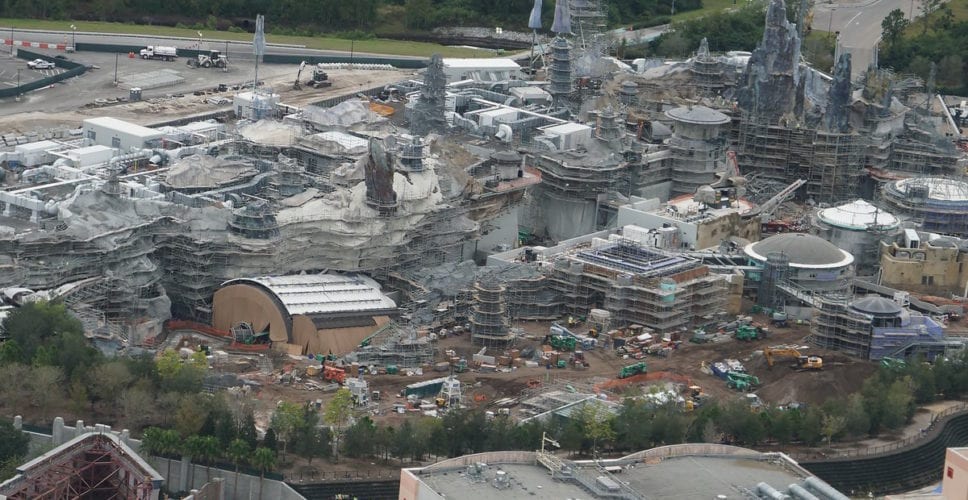 But now, the two show buildings appear as one huge mountainous landscape. Large cranes have since left the construction site as most of the major steelwork is finished. Green has returned as trees attempt to hide the secret work within. Scaffolding comes down daily as more and more rock work is completed. 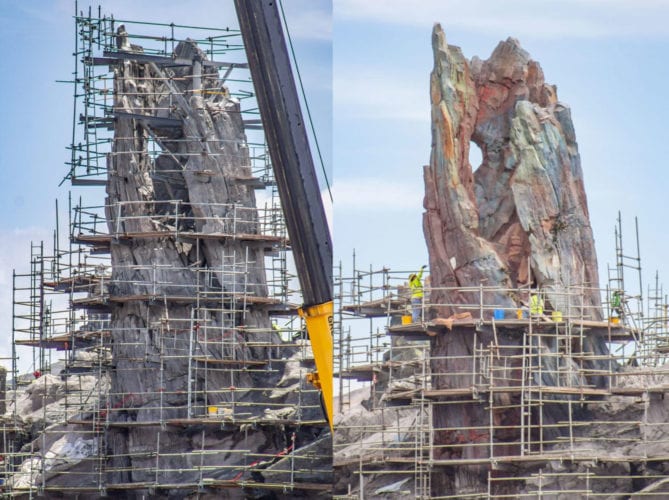 August 1, 2018 we got our first full glimpse of one of the petrified trees. Then, November 11, 2018, we saw that same petrified tree with a surprisingly colorful look, despite the name, Black Spire Outpost. 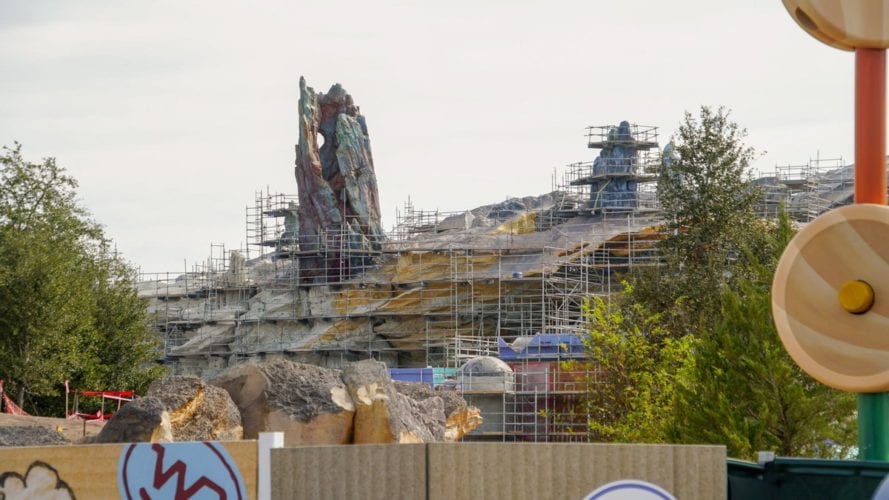 Now, we can see the petrified tree atop the rest of the intricate rock work above the Star Wars: Rise of the Resistance attraction.

From a huge dirt pile, to a sprawling city, this land has transformed in a major way in just one year. 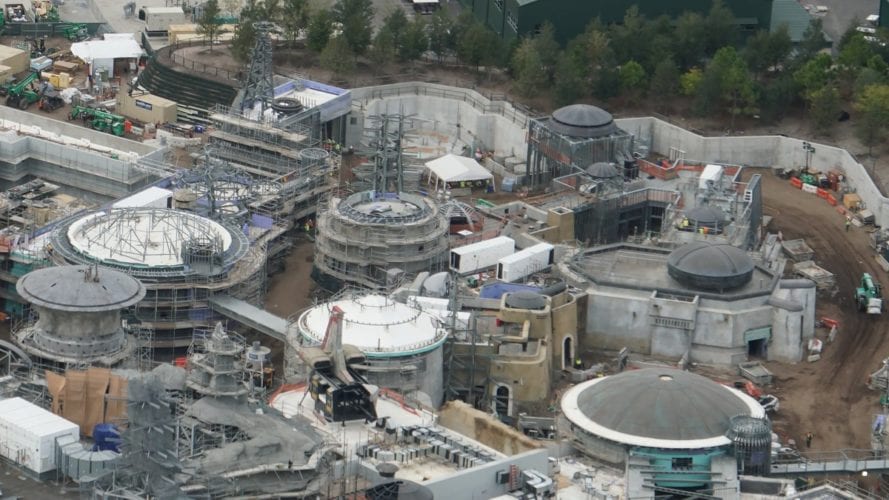 Now, updates don’t come in the form of new buildings, but in the addition of new details and the loss of scaffolding. This photo showcases how far along theming has come on the smaller buildings near the entrance from Toy Story Land. Even though the food freighter spaceship, bottom left, has been placed since August, it still is not complete. Most likely the ship will never be fully assembled because guests wouldn’t be able to see the missing details from the land anyway. Unless the ship has been missing pieces for months, it is probable that we are seeing its finalized look. 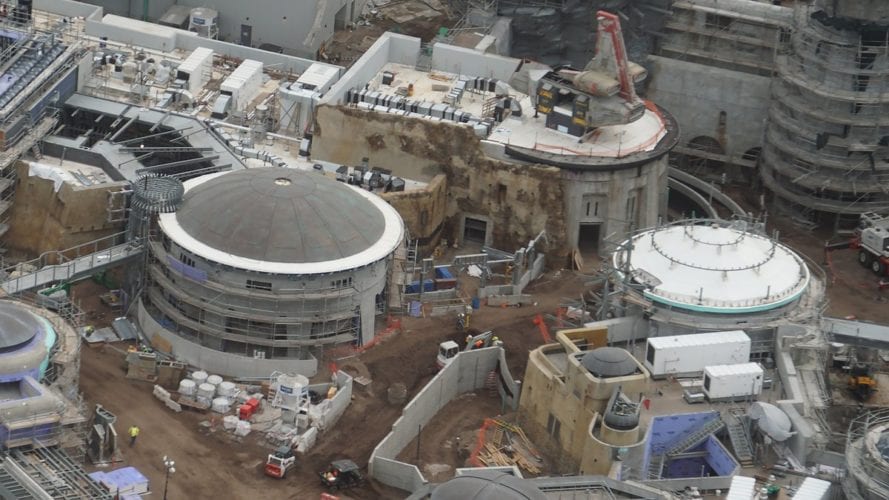 As you can see, from the viewable guest side, the ship appears complete. This angle also shows us that a lot of theming work has finished in this area as well.

This is also the first time we can see the dome topper of this small green turret on the structure. The three blue wrappings in the construction photo correlate to the other turrets we can see on the left side of model picture. 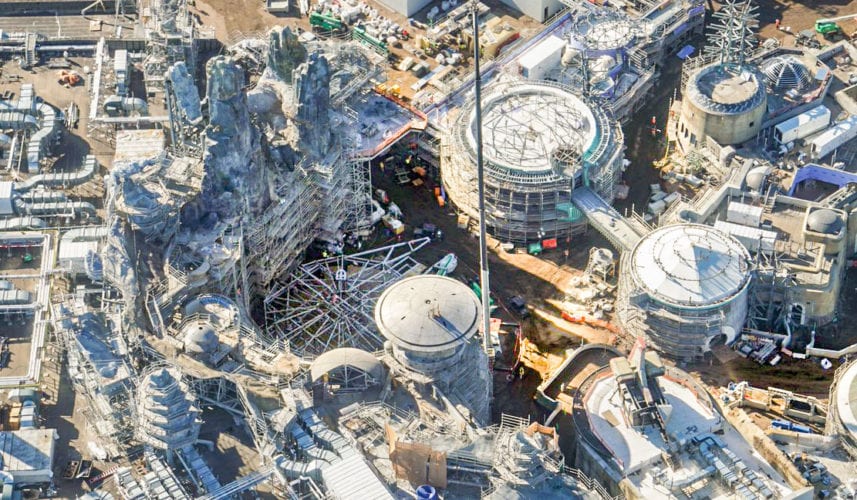 Star Wars: Galaxy’s Edge will open at Disney’s Hollywood Studios late Fall of next year and in Disneyland this upcoming Summer. With this much progress in just a year, it is exciting to see what new developments will unfold in the upcoming months. Click one of the many links below to see how the progress has continued in both Disneyland and Walt Disney World.

Check out this Cheese Theme Park in South Korea