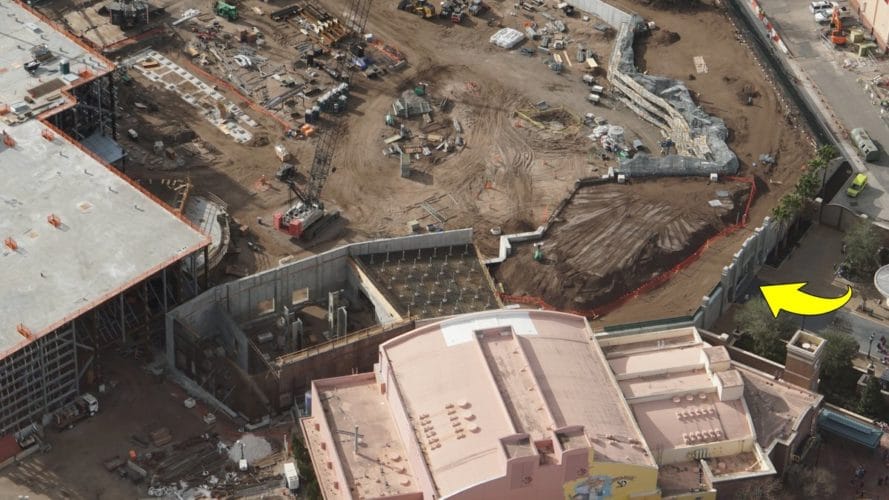 Starting at the Grand Avenue entrance, we can see mountains of dirt piling up. It is presumed that more buildings will be built atop of this dirt to fully hide the rock spires of Galaxy’s Edge from the rest of the park. 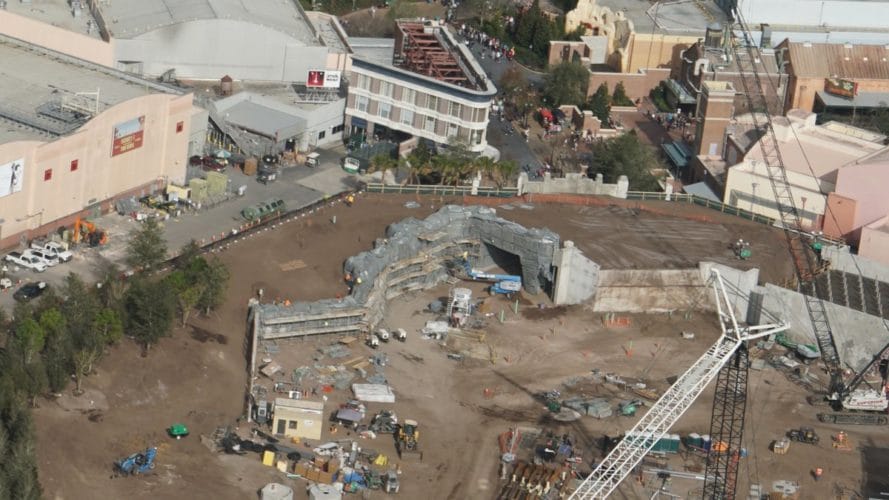 Taking a look at the other side of the Grand Avenue entrance, rock work continues on, and a mini forest is being planted on the far left. This entrance will be a lot like the entrance to Diagon Alley, where guests will be forced to take a sharp turn for a big reveal of the land. 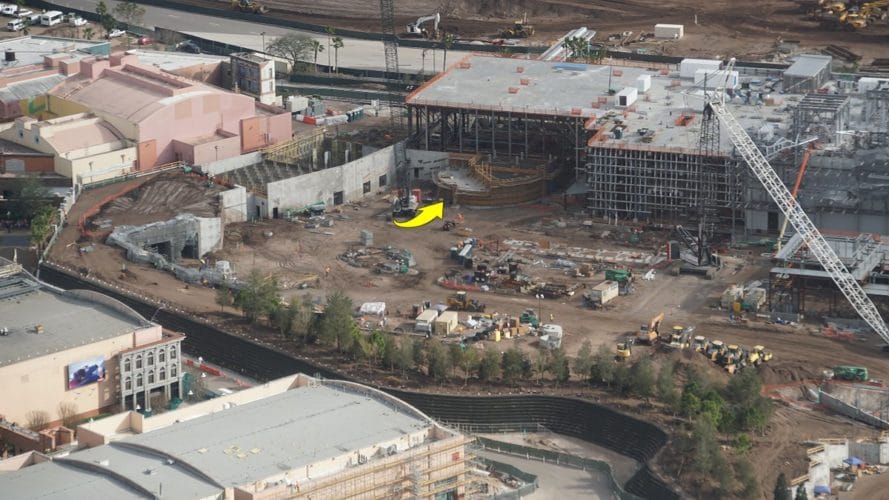 On the left is the Grand Avenue entrance, with the arrow pointing at the entrance to the Battle of the First Order attraction. This attraction will feature trackless vehicles, animatronic Stormtroopers, and full scale AT-AT Walkers. 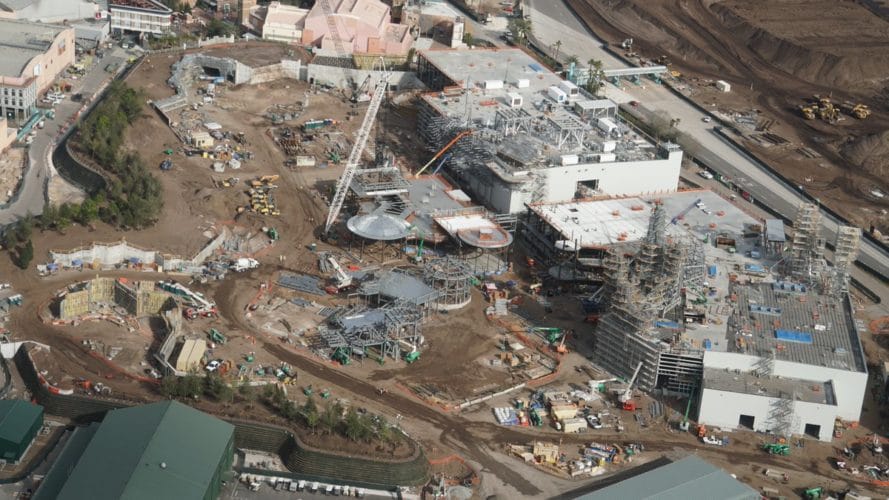 Zooming out, you can see an overview of the whole land. On the far right, the rock spires are over the Millennium Falcon attraction which features the highest point of the entire land.

Focusing on this domed roof in the center we can see the main restaurant of Galaxy’s Edge. This is expected to be one of the largest food and beverage centers at any park in Walt Disney World. The model comparison shown here is featured in the Walt Disney Presents attraction at Disney’s Hollywood Studios. 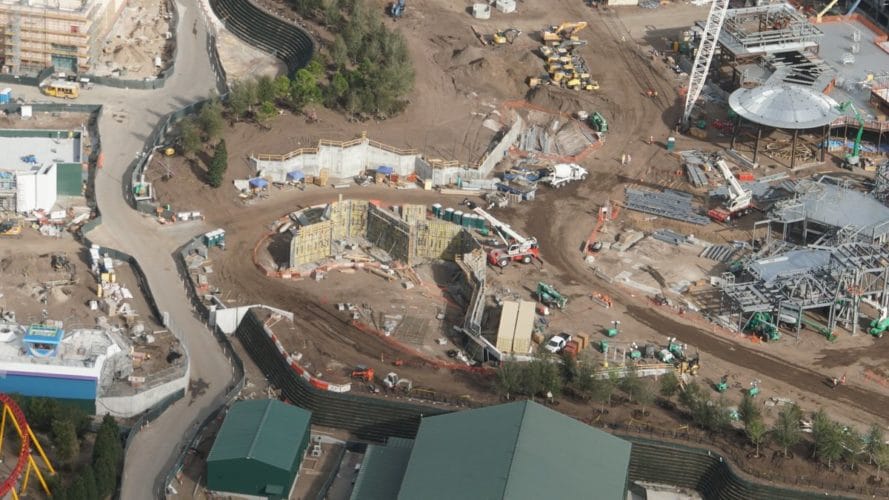 The newest construction at Galaxy’s Edge is on the second entrance by the upcoming Toy Story Land. 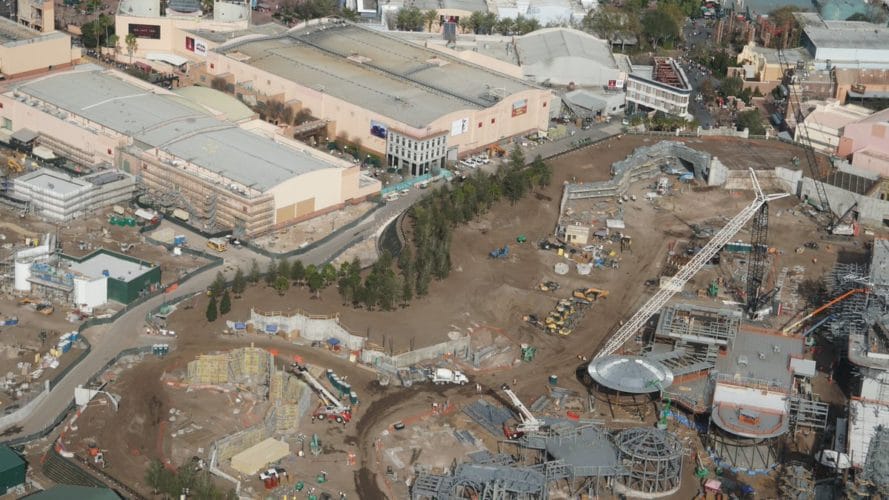 This final overview shot looks towards the show buildings of Toy Story Midway Mania and the upcoming Mickey and Minnie’s Runaway Railway. It also features the recently planted mini forest which will serve as a backdrop and cover for Star Wars: Galaxy’s Edge.

Do we have any thoughts on when WDW will open, had there been any rumoured dates?

There hasn’t been a confirmed date, but rumors are speculating very late in 2019. If construction forces them to push back towards November and December it might actually work in their favor with the relative proximity to the release date of Episode 9.

Great photos … any insight into if/how they will incorporate the existing Star Tours attraction into SW:GE land?

Much like the opening date we don’t have anything confirmed, but there are some rumors. My personal favorite rumor is that Star Tours will be given a present and past section of the ride. If you ride the right side of the attraction (3 ride vehicles) you will be given possible planets from episode 1-6 and will exit out of the normal gift shop. If you ride the left side (also 3 ride vehicles) you see only episode 7-9 movies and be sent down a new, very long exit. This exit will coincide with the new updated ending of Star Tours that shows Batuu and have you literally walk into Batuu (Star Wars: Galaxy’s Edge) upon exiting the attraction.

I spoke with a Disneyland cast member and they informed me that the goal for TWDC is to open the DL and WDW versions at the same time, on the same day. While this is not what was publicized, the WDW version seems to have more construction equipment at the site and although it was started much later than the DL version, it is progressing far more rapidly. Once Toy Story land opens, much of the construction tools will be moved a few thousand feet over to further the speed of the WDW Star Wars themed land. In regard to star tours, at Disneyland it is likely to close or be moved to the expansion space next to the Millennium Falcon attraction and Toontown. For WDW, the attraction is just likely to have an entrance that goes around the back of the new Grand Park, similar to how Midway Mania’s entrance is changing to fit the new land.