Photo Update: The Millennium Falcon has landed in Disneyland

We are less than one year away from the opening of Star Wars: Galaxy’s Edge in Disneyland California. While Walt Disney World was the first park to get a spaceship, Disneyland has started the construction and theming of the Millennium Falcon. This photo report, with aerial photos by NearMap, and in-park photos by Matt Roseboom and @TharinWhitePhotography on Instagram, showcases a monumental step in the Galaxy’s Edge construction.

Adding Star Wars: Galaxy’s Edge to Walt Disney World and Disneyland California has caused huge shifts in park operations and construction. Hollywood Studios at Walt Disney World destroyed an entire land to make room, along with the numerous shows and attractions within. Disneyland had to move the Disneyland Railroad, which caused the train to make a left turn for the first time in its history. Disneyland has also had to rework the back half of Frontierland to make the numerous new entrances into the land.

But, it is all for this. A colossal sized new land, dedicated to the universe of Star Wars. The progress slider you are looking at here showcases the construction in Disneyland. Star Wars: Galaxy’s Edge will be a land in both Walt Disney World, and Disneyland, and the lands will be nearly identical. The main difference is that Disneyland’s version will have three entrances, compared to two at Walt Disney World.

The photo showcases the two massive show buildings that will house the two signature attractions in the land. On the left, an attraction that will take guests on a thrilling mission inside of a First Order Star Destroyer. The building on the right, which has begun construction on the Millennium Falcon outside, will let guests pilot the Millennium Falcon. 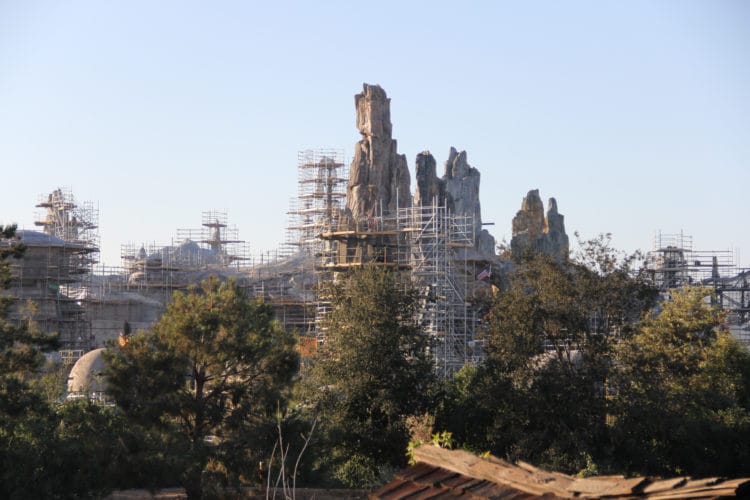 The Black Spire Outpost was named such because of the petrified trees that have stood the test of time. Smugglers came to the planet of Batuu and used these spires as landmarks and a base of operations. The Black Spire Outpost has since grow into a sprawling town full of all kinds of creatures from every corner of the galaxy. 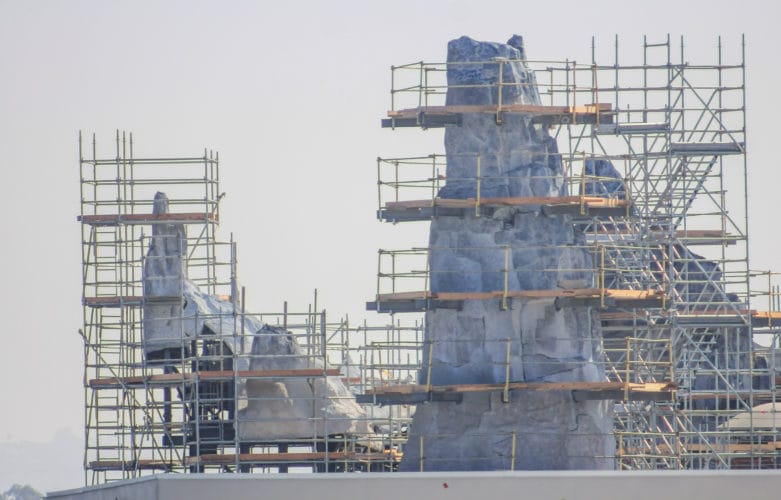 Photo by TharinWhitePhotography on Instagram, taken from Minnie level of Disneyland parking garage.

These petrified trees will be the background for the entire land, and a major part of the land’s back story as well. Looking at the work for Hollywood Studios in Florida, as well as the construction in Disneyland, it seems like these will be the first themed elements to be fully completed. Their height alone makes them easily seen from inside of both parks. With Disney’s incredible dedication to story, I am sure they want the scaffolding away from guest’s view as soon as possible.

But, even with all the work that has been done so far, there is still a lot more to complete. We have heard reports that Cast Members in both Disneyland and Walt Disney World have been recruited to begin the Test and Adjust phase of both attractions.

Photo by TharinWhitePhotography on Instagram, taken from Tarzan’s Treehouse

This photo gives us a view of what we can expect to dominate the skyline. These large tree spires are sure to house operational needs like lights, speakers and possibly projectors.

In very short instances, you can witness a fairly unobscured look out over the rooftops of the Black Spire Outpost while on Big Thunder Mountain Railroad. The domed rooftop on the right is connected to the same building that will house another smaller spacecraft atop its roof, much like in Disney’s Hollywood Studios. 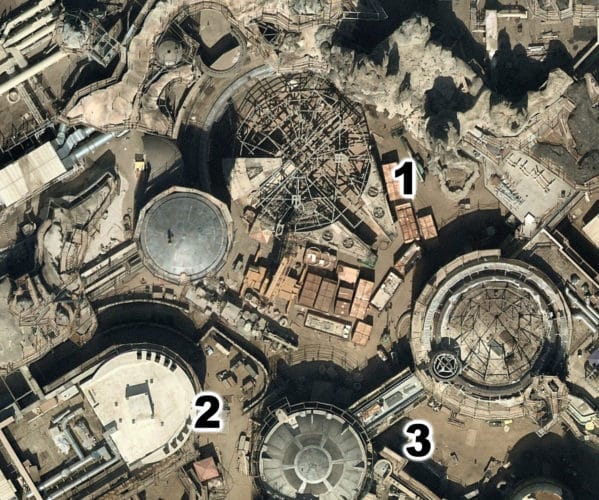 This close up shot of the Millennium Falcon is sure to get everyone excited. The Falcon in both Disneyland and Walt Disney World will be 1:1 scale. Every inch will be viewable, just as it is in the films. This is a level of detail never before seen for the Star Wars films. 1 is where Millennium Falcon itself will sit. Guests will be able to do a walking tour of the spacecraft here, and nearby will be the entrance for the Millennium Falcon attraction. 2 is where the second spaceship will be placed, Disney’s Hollywood Studios has this spaceship already. 3 is pointing at an overhead walkway. Looking over the construction, Galaxy’s Edge has very large amount of these overhead walkways connecting almost all of the structures.

While it is possible guests will be able to use these, it is my thought that this will be primarily for Disney cast members. I assume they will use these walkways to discreetly move supplies like food and merchandise. This will allow more room for guests walking the land, and allow easier transport of these items. That being said, I hope I am wrong, because I would love to walk throughout the land and see different viewpoints.

Here is another slider from NearMap that showcases the recent work that went into bringing the Millennium Falcon to its current resting place. It is assumed that the hoard of boxes laying around near the Millennium Falcon are other pieces, waiting to be assembled onto the skeletal structure.