Star Wars: Galaxy’s Edge is set to open summer 2019 in Disneyland, and late fall 2019 at Disney’s Hollywood Studios in Walt Disney World. The first sections of scaffolding have come down at the Hollywood Studios construction site, with a rock exterior underneath it. This photo report, with shots provided by our contributor, @bioreconstruct on Twitter, checks out the current construction progress as we power through the middle of the summer. 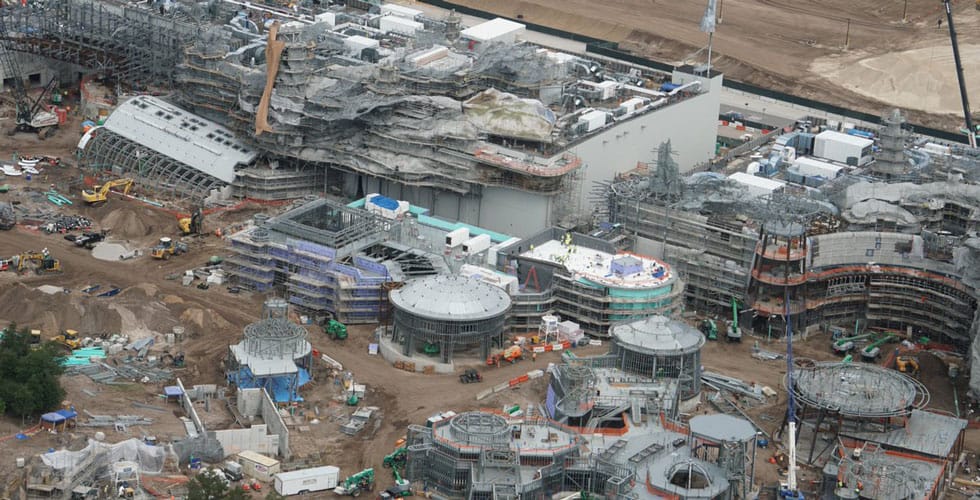 This shot shows just a glimpse of what guests can expect when they enter Star Wars: Galaxy’s Edge next year. 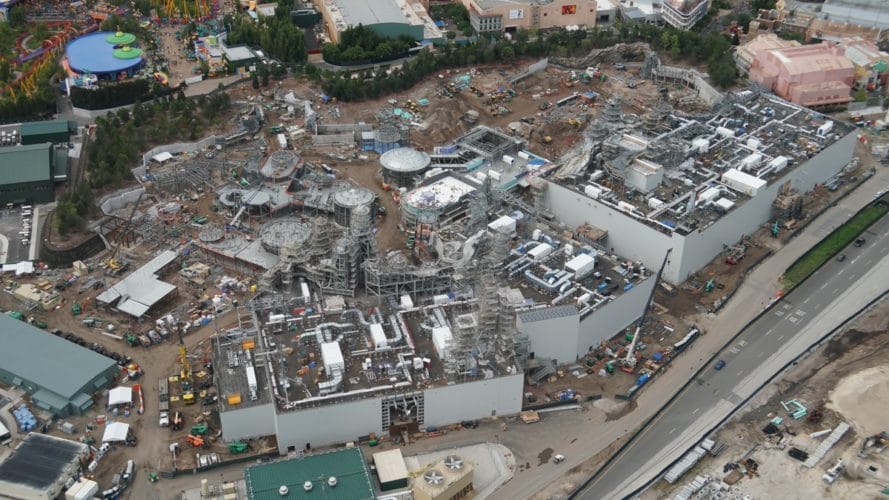 Zooming out, you can see the entirety of the construction for the walkable guest areas. Some backstage areas for cast members are being built outside this photo on the bottom left. The top left also showcases the eventual entrance to the land from the recently opened Toy Story Land.

Speaking of Toy Story Land, here is a view from the recently opened land looking towards the construction. This tower is the same one seen here in the model from the D23 Expo. 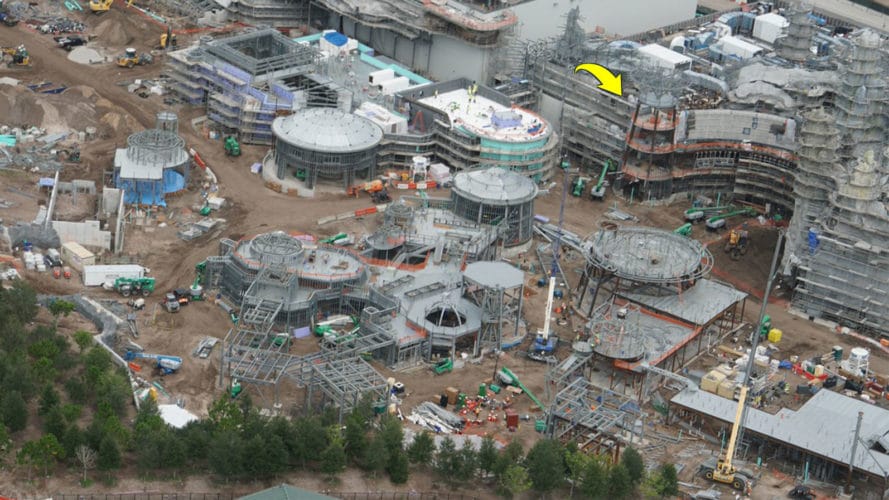 This same tower can be seen here, near the future location of the Millennium Falcon. The building to its left, which is primarily teal under the scaffolding, will house a starship atop of it.

This location will house a food and beverage location, and it is highly possible it will be the location for a few shops as well. The large domed building can be seen in model form at Disney’s Hollywood Studios in the Walt Disney Presents attraction. It is expected to feature a large eatery inside of it. The open roofed area to the left is expected to be an open-air shopping location.

This model gives a very detailed look at what we can expect this particular building to look like upon completion. The human model cutouts should give a relation of size in the massive land.

On the other side of this structure we can see the beginning of the exterior turrets and towers. The smaller building at the bottom right is also fairly new and will be connected to the domed structure via a second floor walkway that guests may be able to use. 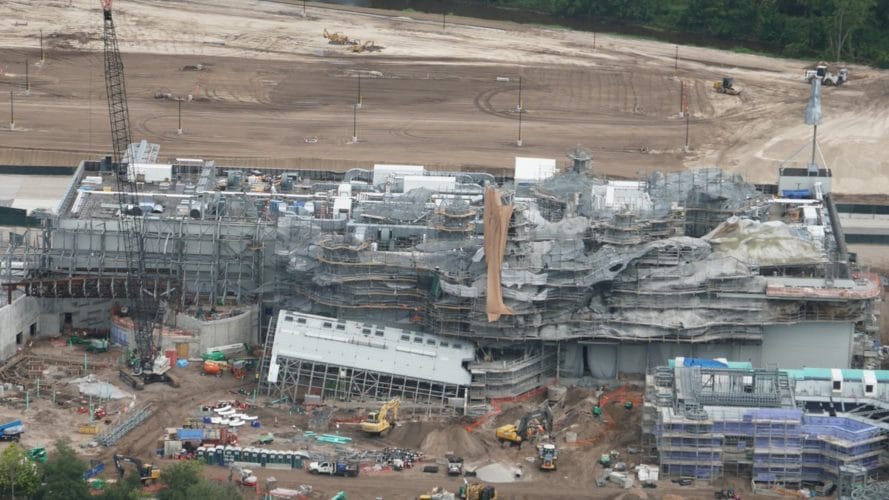 This shot showcases the exterior work ongoing on the First Order Star Destroyer attraction. This ride will take guests into the middle of a battle against the First Order. “It’s an attraction built on a scale we’ve never done before,” said Imagineer Scott Trowbridge. While we don’t know the exact location it will happen in the ride, we do know that two AT-AT Walkers will be featured. It is also rumored that this attraction will feature a trackless ride vehicle.

While not confirmed, this slanted structure is highly rumored to be the entrance for the First Order Star Destroyer attraction. 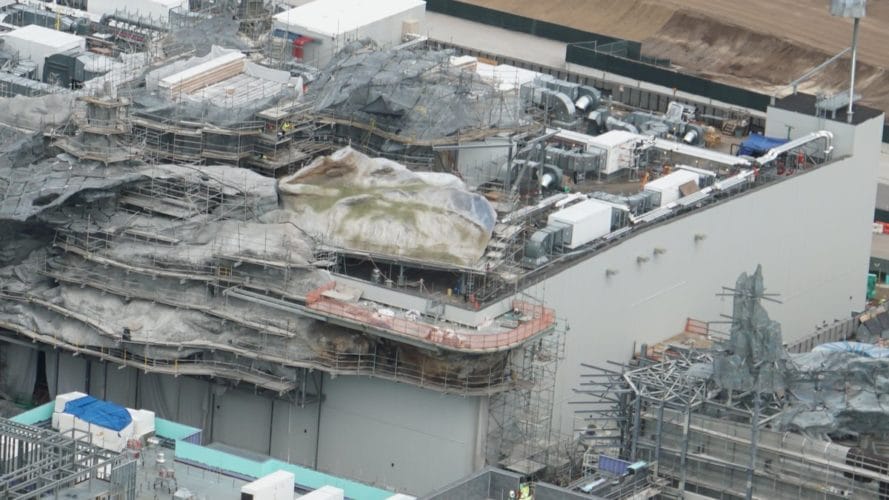 Atop the First Order Star Destroyer attraction is the first painted rock work. While relatively small in comparison with the land, this does show us that at least part of the land is ready for scaffolding to come down. Expect a major difference in this area by the time the next photo update is possible. 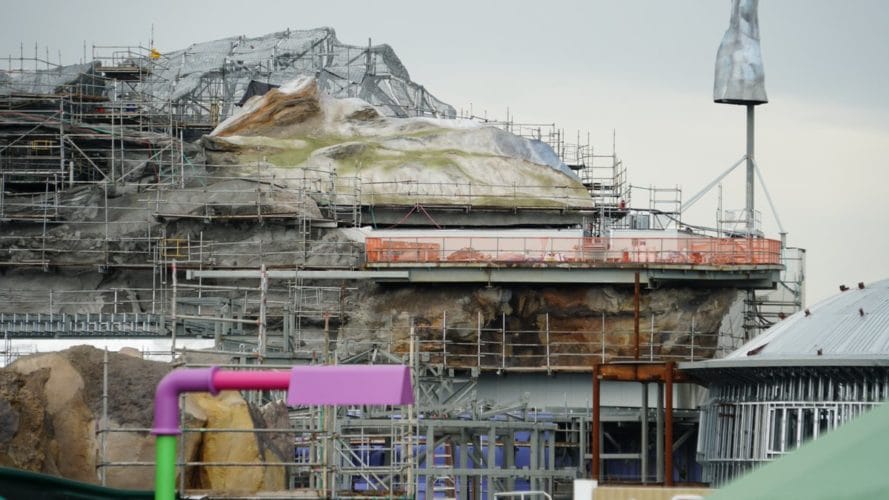 This painted rock work can also been seen from inside Toy Story Land. It is currently unknown what will cover the floating mountain on the top right side. 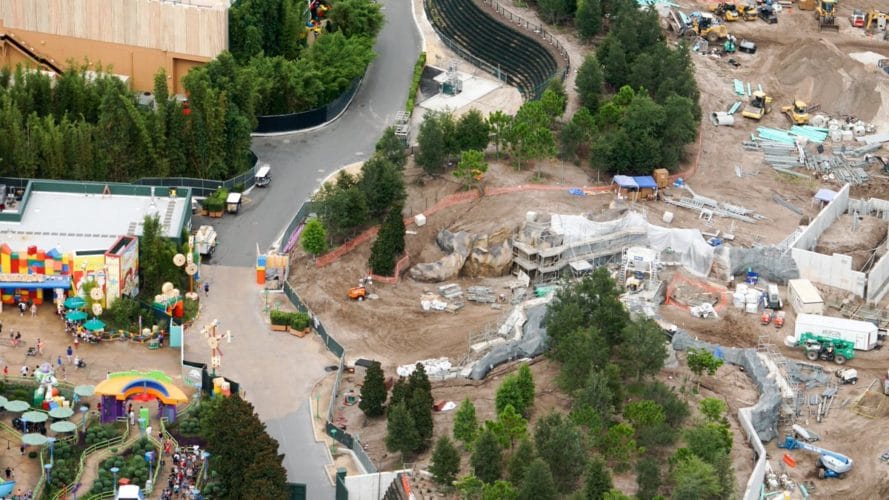 The Toy Story Land side entrance to Galaxy’s Edge can be easily seen by guests in the park. Rock work is currently being worked on in this area as well. For now, the area in-between both lands is used by cast members as a backstage route to get to different areas in the park. 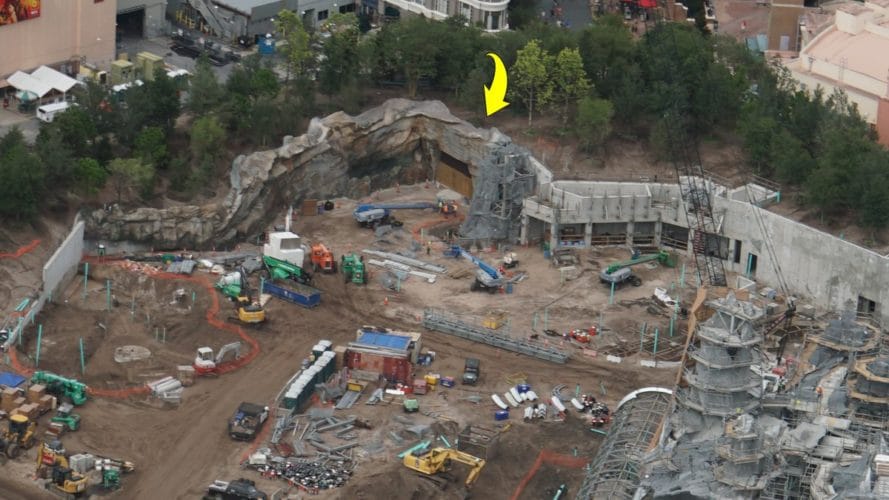 This will be the second entrance into the land, and will bring guests from the Grand Avenue section of the park. The tunnel is built in a way, so that guests will not be able to see directly in-or-out of Star Wars: Galaxy’s Edge. There also appears to be a temporary wall in front of the tunnel entrance. I personally would love for Disney to allow guests down the tunnel, with pictures of concept art lining the walls. Then guests can take a view at whatever is peering over the walls. 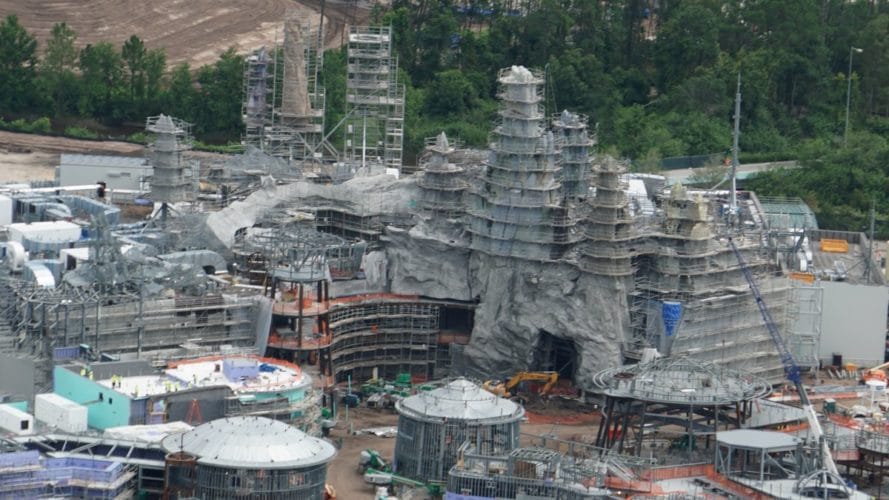 Lastly, if we look at the center of the Millennium Falcon show building, we can see the beginning formations of the elevated structure in the spires. While we don’t currently know the purpose of this building, I imagine it is either a facade or perhaps a section of the ride’s queue. To learn more about this upcoming land, check out these articles and linked videos.

In the next update can you show where the Star Wars Resort will connect to the Park at Galaxy’s Edge?

those comparison photos to the models are awesome. thx