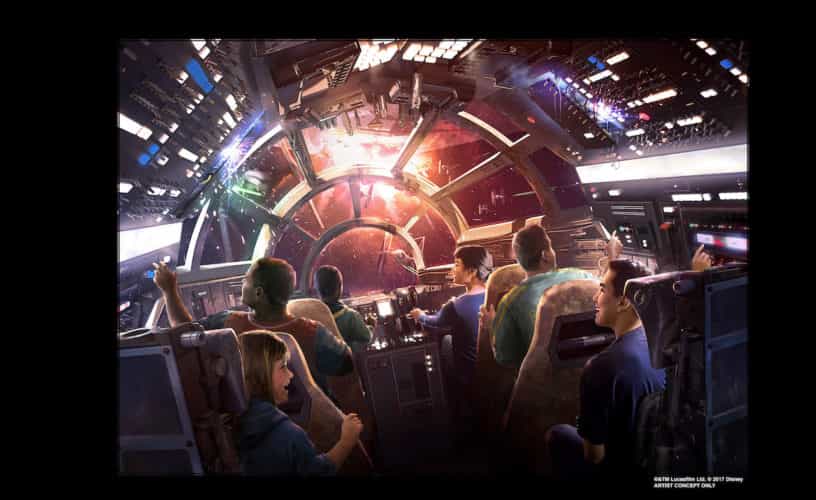 Star Wars: Galaxy’s Edge is officially coming to both Disneyland park in Anaheim, Calif. and Disney’s Hollywood Studios in Orlando, Fla. in 2019.

Bob Chapek, Chairman of Walt Disney Parks & Resorts, revealed at D23 Expo that Star Wars: Galaxy’s Edge is the official name of the Star Wars-inspired lands that are currently under construction at the Disneyland and Walt Disney World Resorts.

The lands, both called Star Wars: Galaxy’s Edge, will allow guests to visit a remote trading port on the edge of wild space, where Star Wars characters and their stories come to life – and where guests will find themselves in the middle of the action.

One attraction, a battle between the First Order and Resistance, will make guests feel like they on a Star Destroyer inside a hangar bay. “It’s an attraction built on a scale we’ve never done before,” said Imagineer Scott Trowbridge. Concept art shows Kylo Ren, whose “presence will be felt” within the ride, using the Force to choke a levitating victim. 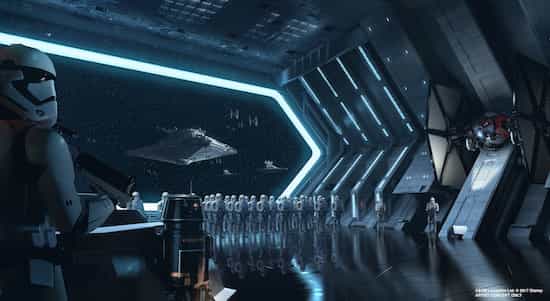 The second attraction will give guests (apparently in groups of 6) the opportunity to fly the Millenium Falcon, piloting the ship, shooting blasters or preparing for hyperspace – all while completing a critical mission. Chewbacca and Hondo recruit you for a mission, and how you perform affects your experiences after the ride.

Perform with skill and you may earn extra galactic credits, while bringing the ship back banged up could put you on the list of a bounty hunter. End up on Harkos’s list and you may face a problem if you show up at the local cantina, where guests will be able to try drink concoctions like blue milk.

Nearby, they’ll also be able to acquire trinkets and treasures from across the galaxy from an Ithorian trader.

Inside Star Wars: Galaxy’s Edge, guests will meet familiar characters including BB-8, Chewbacca, members of the First Order and even Rex, the original Star Tours pilot droid who is now the DJ at the cantina.

Exact opening dates in 2019 for Star Wars: Galaxy’s Edge were not announced, but the land will will open first at the Disneyland Resort and later in the year at the Walt Disney World Resort.

‘Marvel’s Guardians of the Galaxy’ will return to Disney XD for third season focused on Mission: Breakout attraction

Ultimate Foodie Guide: Celebrate May the 4th at...

Six ‘bang for your buck’ snacks at the...