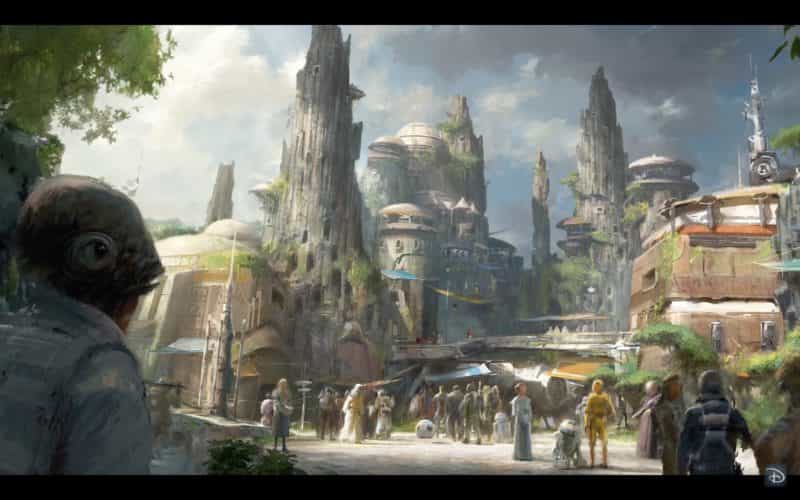 New Star Wars Land details were divulged at the Star Wars Celebration Disney Parks panel. In this updated concept art, a mountainous spire replaces what was originally an observation deck.

We’re still two years away from visiting a galaxy far, far away at the Disney Parks, but new Star Wars Land details were revealed at last weekend’s Star Wars Celebration convention in Orlando that will ignite your anticipation for the 2019 expansions at Disneyland and Disney’s Hollywood Studios.

As part of the Star Wars Celebration fan convention held April 13-16, 2017 at the Orange County Convention Center, Disney Parks and Lucasfilm teamed up for a panel presenting new Star Wars Land details that hint at the experiences guests will encounter when the twin lands debut in 2019. The panel participants included Scott Trowbridge, Wendy Anderson, Asa Kalama and Chris Beatty from Disney Imagineering, as well as Lucasfilm’s Pablo Hidalgo and Doug Chiang. While they didn’t reveal all of the secrets of Star Wars land, they did release some new images — including this video — along with many tantalizing clues about the attractions currently under construction:

Star Wars Land Location
First of all, the panel confirmed that Star Wars Land is not based on any planet previously seen on screen in the Star Wars saga. While the location’s name is still not yet known, we do know that it is a semi-forgotten “remote frontier outpost” somewhere on the Outer Rim, on the edge of the Unknown Regions. 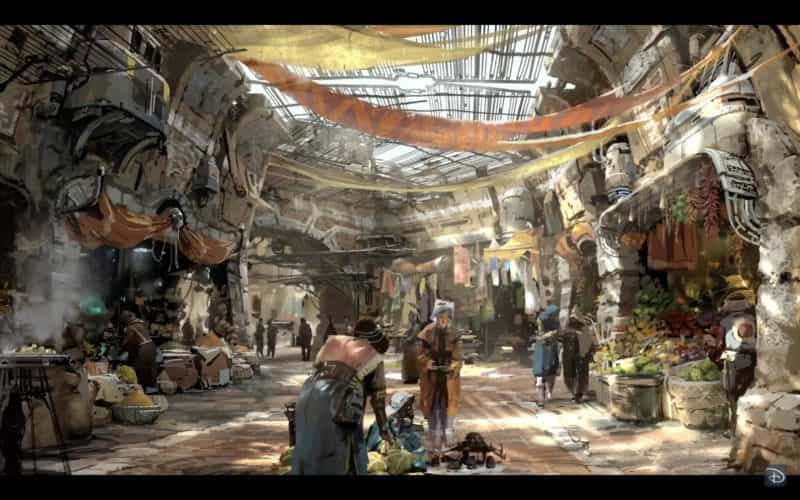 “This used to be a vibrant trading port back in the old sub-lightspeed days, but now with advent of hyperspace, its prominence has kind of fallen and faded a little bit which has made it a great spot for those who didn’t want to be on that kind of mainstream path,” Scott Trowbridge explained. “The smugglers, the bounty hunters, the rogue adventurers looking to crew up, the people who don’t want to be found. Basically, all the interesting people.” (Disney fans may recognize that this backstory is strikingly similar to the history of Radiator Springs, also known as Disney California Adventure’s Cars Land.)

Despite being a previously unknown location, visitors will recognize architectural motifs and creatures that are familiar from the Star Wars films. The designers used concept art by legendary designer Ralph McQuarrie for reference to ensure everything would look authentic to the Star Wars aesthetic. For example, keep an eye on the water fountains, because you may see the eye of the Dianoga trash monster staring back at you! 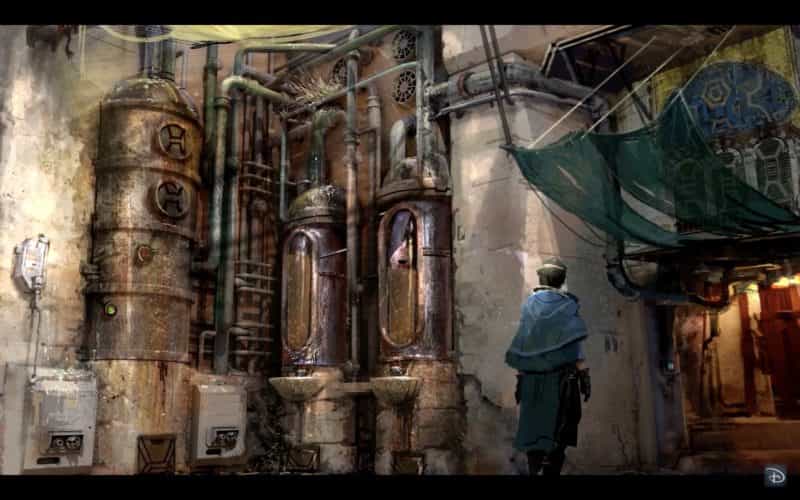 While we may not know exactly where Star Wars Land takes place, we do know roughly when. Both the Resistance and the First Order play prominent roles in the land, placing the time-frame sometime during the current sequel trilogy of Episodes 7 through 9.

One of the land’s two main attractions involves the Millennium Falcon, which will allow every rider to enter the iconic ship’s cockpit and help control it on an interactive interstellar mission. Every passenger will have a role to play in piloting the famous flying “garbage,” and the actions you take may have repercussions even after your adventure. 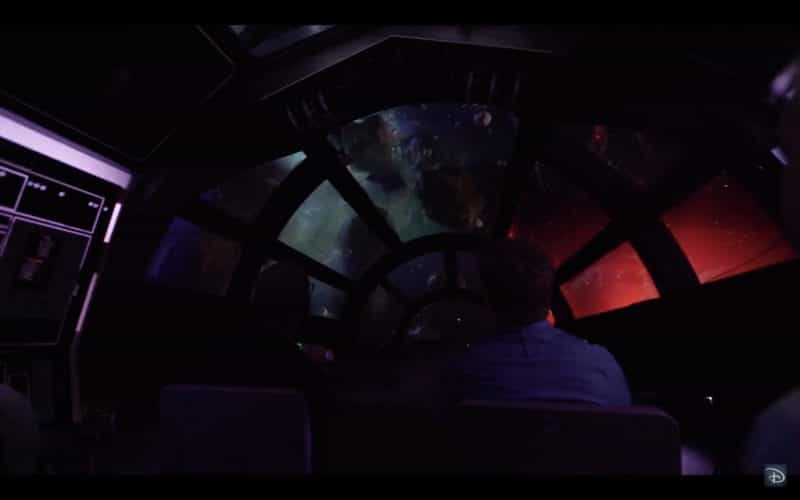 “Chances are you’re going to make it to your destination on the other end. The ship just may be a little more damaged than when you begin,” said Asa Kalama. “If you bring a ship pretty heavily damaged, chances are you know somebody’s not going to be too happy about that.”

The land’s other E-ticket is an interactive battle encounter between the Resistance and First Order, in which riders can choose which side they wish to support. The massive indoor dark ride is described as one of the “most ambitious projects” in Disney history, and will feature at least two full-sized AT-AT walkers, as seen in the Battle of Hoth from The Empire Strikes Back. 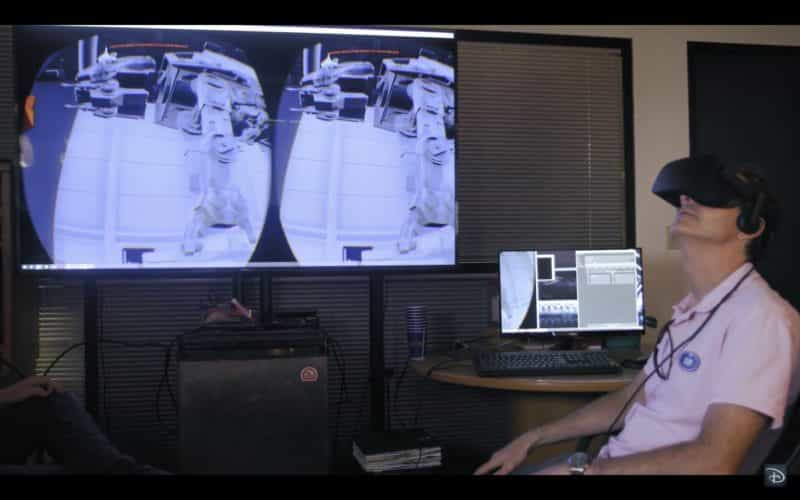 Star Wars Land Food
Few details were revealed about eating in Star Wars land, but Chris Beatty did let slip that “blue milk” will be on the menu. Concept art was also displayed depicting a podrace engine that has been repurposed to grill meat. 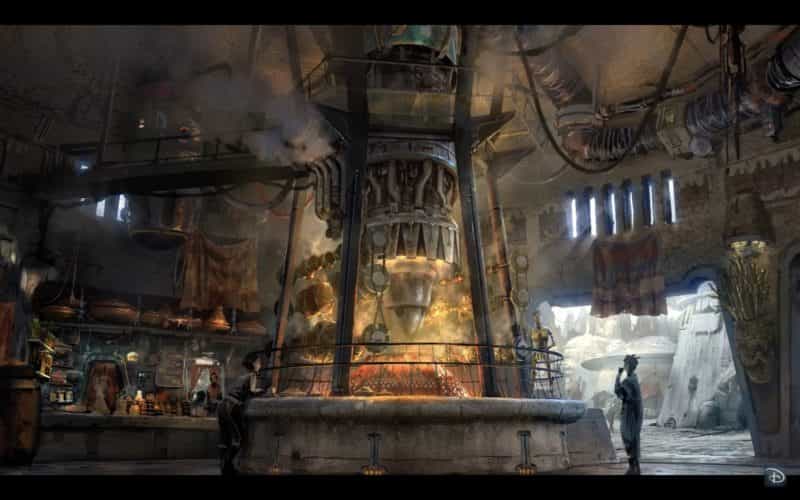 Star Wars Land Entertainment
Though no formal sit-down shows have been announced for Star Wars land, but there will be immersive, interactive performances occurring all around the guests as they explore the area. Wendy Anderson showed a video of a martial arts stunt rehearsal, which featured a young woman fighting off Stormtroopers with a broom, and promised that the rooftops and ladders of the land would become the stage for the performers. “You’re not going to sit in a chair and watch it happening,” Anderson said. “You’re going to be standing right in front of it. Very fun.”

If some of those performers portray Jedi, they may have a new technology powering their signature weapons. Disney has developed a new lightsaber that a panel moderator, who was given a private peek, described as “real.” This patent, which was filed by Disney last summer, describes a method for using a reflective light saber to bounce “laser bolts” back at a flying drone or animatronic enemy.

Star Wars Land Interaction
Beyond the rides and souvenirs, what will make Star Wars land stand out is the layers of interactivity woven into the area. In addition to agents of First Order and Resistance, the land will also be populated by smugglers and bounty hunters, who will offer you missions to engage in, and gauge you according to your actions in the land. Essentially, Star Wars Land will be a giant live-action role playing game, which guests will be able to interact with on a much deeper level than any typical theme park attraction. Disney has previously attempted something similar with Disneyland’s Legends of Frontierland game, but never before anything on this scale. 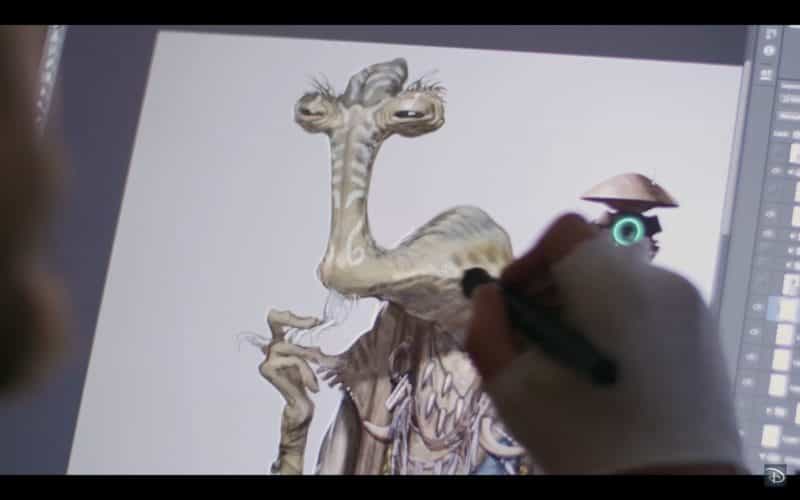 In addition to live actors and attractions, guests will also find Star Wars land full of droids to interact with. “We are going to see some droids that we know and love from screen as well as get the opportunity to meet some brand new droids we’ve never seen before, each with their own unique sort of personality and character,” said Asa Kalama. “We treat droids as characters,” added Anderson. “Droids are people too.” 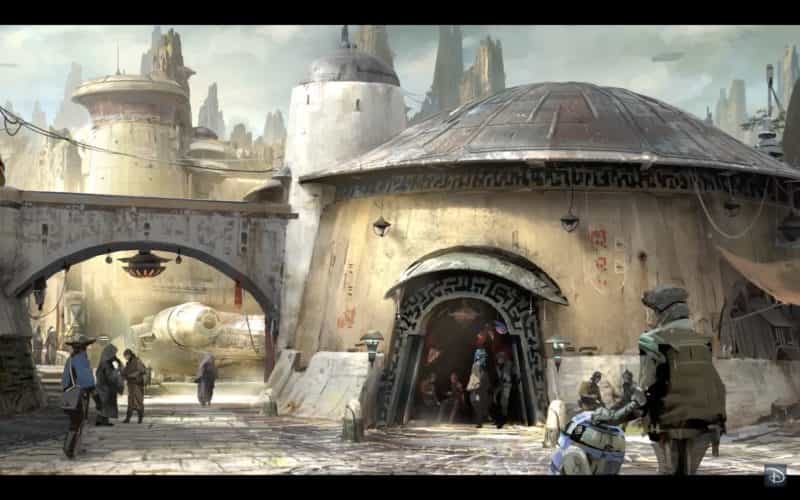 Additional Star Wars Land Information
At the end of the panel, it was suggested that more Star Wars Land details will be released at the D23 convention in July. Until then, keep an eye on Attractions Magazine for further updates on the expansions, and watch our coverage of Star Wars Celebration Orlando with these videos:

A look back at Star Wars Celebration Orlando 2017

Wild Florida launches first-ever Gator Week this May for guests