A major milestone has been achieved as Star Wars: Galaxy’s Edge at Disney’s Hollywood Studios has received its first spaceship.  This photo report looks into new details which are beginning to bring the land together.

After years of construction, we are finally beginning to see the first pieces of the Star Wars Universe be placed inside Star Wars: Galaxy’s Edge. This space shuttle was seemingly placed overnight, and while it isn’t fully complete, it does showcase the immaculate detail we can expect throughout the entire land.

This model of the spaceship, left, can be seen inside the One Man’s Dream attraction, which is also at Disney’s Hollywood Studios. We can see the ship’s design did have a few color changes, but overall remains mostly the same. This can be expected for most concept art or models though. Throughout the creation process, details are expected to be tweaked to better fit the storyline and construction needs.

The building the spaceship is sitting on top of has long been speculated to be the large food service location inside of the land. 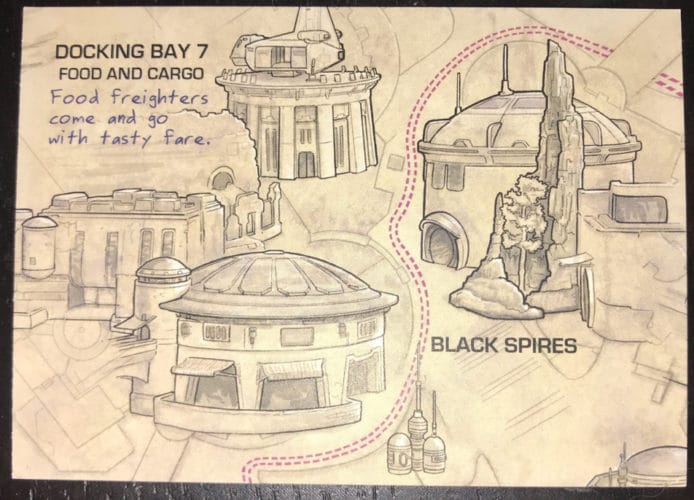 One of the trading cards, which have been given out during Star Wars Galactic Nights events, also specifically mentions food freighters when referencing the spaceship and its docking bay.

Nearby, construction begins on a bridge that will connect the large domed building to a structure whose purpose is currently unknown. 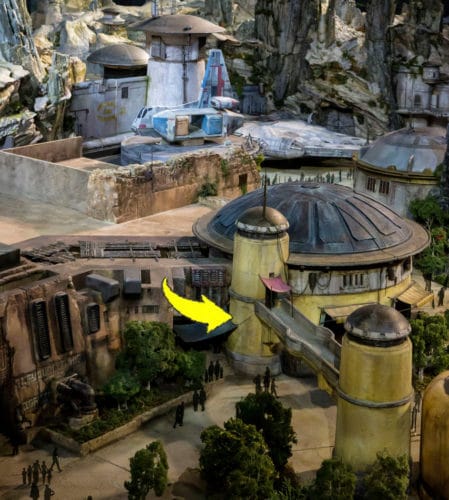 Based purely off of speculation, I would assume that this bridge will not be usable for guests. Cast members will need to transport foods and merchandise throughout the land. But, a large cart would take away from the story of the land. Therefore, I think bridges like this will be for cast members only, as a way to transport items quickly while not getting in guests way.

Here is yet another view of the speculated food service location. It is possible the food will be served primarily in the back areas with the white roof. While the merchandise shops will be in the open air sections near the front. 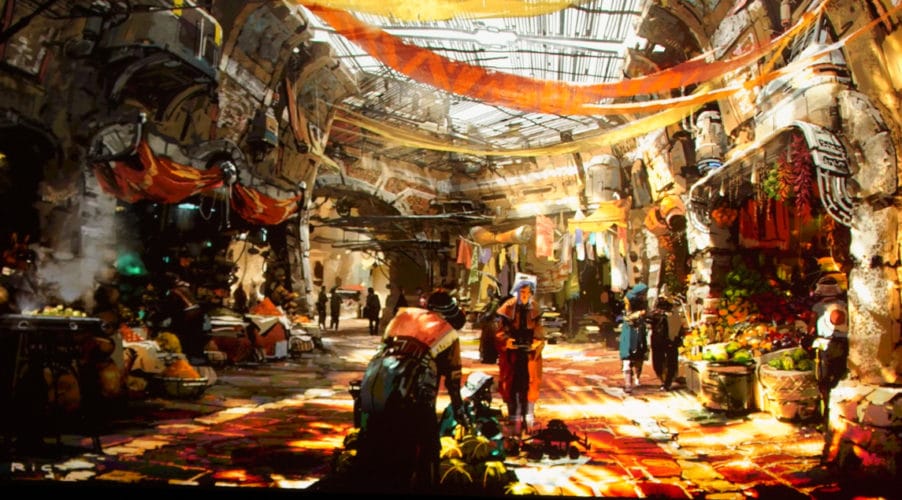 The roof in this concept art seems to closely resemble that of the construction pictured above. But, there is still more to be done. So we could still see this location appear elsewhere when different areas are worked on.

This view offers an excellent look at the massive facade for the First Order Star Destroyer attraction. For now, this singular domed building is particularly of importance.

A trick theme parks use to defy size is called forced perspective. Since guests will never be able to stand in certain places or get too close to particular buildings, Disney can make something smaller than it really would be in real life. But, because guests are far away, the building appears to be the correct size. This trick is used on Cinderella Castle to make the structure seem much taller than it really is. However, it appears this is not being used in this instance. Even through the building will most likely be very far from guests, based off of the safety rails for the construction, this building is quite close to full scale. Then, looking behind the domed structure, is one of the first locations with noticeable rock work being done.

Also on the First Order Star Destroyer facade is this look at one of the black spires. Star Wars: Galaxy’s Edge is based on the planet of Batuu, in the Black Spire Outpost. The large rock structures in the land are actually petrified remains of ancient trees. The Black Spire Outpost is the largest settlement on Batuu, and has become a home for smugglers and adventurers alike.

Here is another view of the possible ride entrance. The second cylinder inside of the main cylinder could possibly be for the ride entrance signage and Fastpass+ touchpoints.

Like always, we need to take a look at the entrance from the Grand Avenue section of Disney’s Hollywood Studios. This entrance will force guests to take a sharp turn, thus hiding Galaxy’s Edge from the rest of the park.

Star Wars: Galaxy’s Edge will open in late fall 2019 at Disney’s Hollywood Studios, and summer 2019 at Disneyland in California. To learn more about this upcoming land, check out these articles and linked videos.