Star Wars: Galaxy’s Edge will take guests into Black Spire Outpost, a bustling hive of smugglers, bounty hunters, Stormtroopers and Resistance fighters. We flew above the construction a few days ago. Let’s take an up-close look at the extreme detail that is being added to the land in Disney’s Hollywood Studios.

First off, the Millennium Falcon – this ship will easily be one of the largest prop or show pieces that Disney has ever created. It dwarves the crane next to it, and has really taken great shape in the past few weeks. 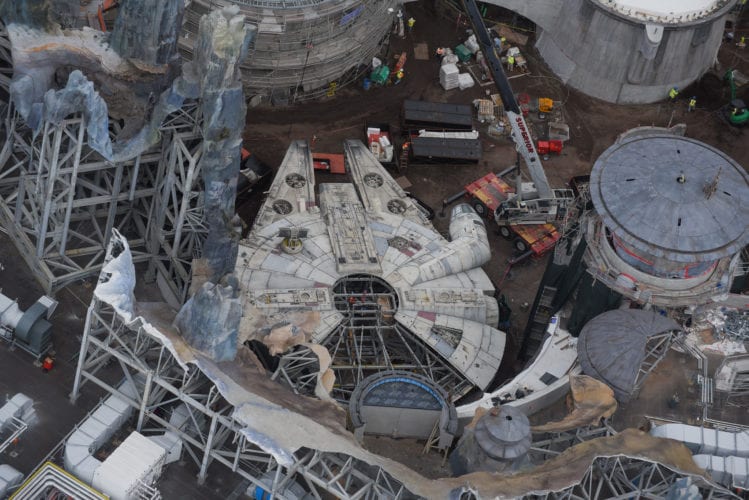 From this angle, a worker in orange near the front of the Falcon can be seen uncovering boxes with more exterior elements for the famous ship. This shot also gives a great understanding of the scale. The Millennium Falcon is huge! It’s amazing to see the detail Disney is giving this ship, even though guests will most likely never be able to see the top. 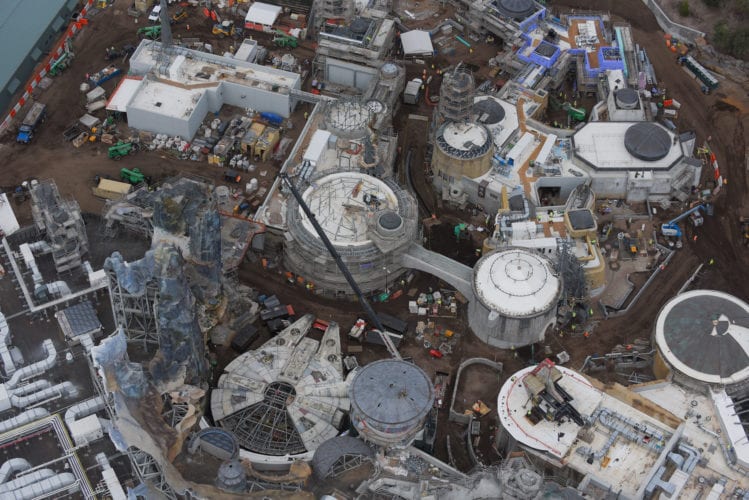 Zooming out, we can see a nearly finished bridge near the Millennium Falcon. As mentioned before, guests will most likely never use these bridges throughout the land. Instead, cast members will use these bridges as an easy way to transport food and merchandise from place to place while avoiding the immense crowds.

It’s also important to note the difference between “onstage” and “backstage”. At the Disney Parks, onstage is a place where guests can go. Here, the magic is preserved and everything is themed to the utmost degree. Backstage areas are sections where guests can’t go. These areas will only be seen by cast members and therefore do not need the extensive theming that onstage areas need.

In the above shot on the left, you can see flat white walls with lots of construction equipment nearby. This is most likely the finished product. Guests will instead travel in the large, curved pathway near the domed roofs. 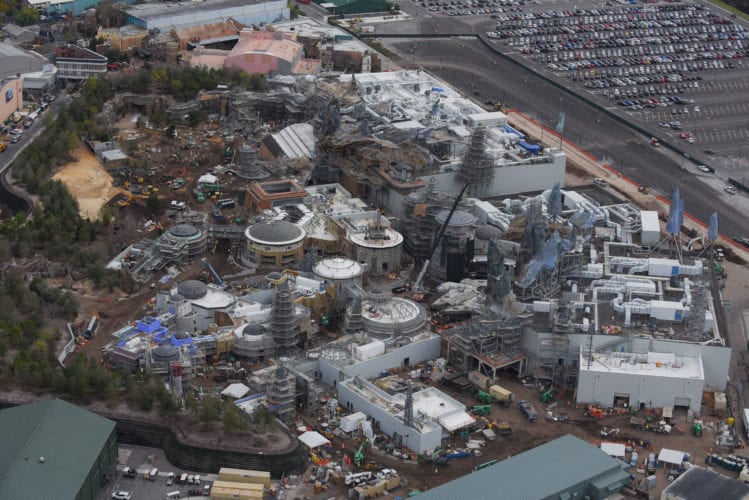 Another example of backstage can be seen in the bottom right. These simple, rectangular buildings may look amazing on the inside, but only in areas necessary for guests. On the top left, you can see the show building for Muppet•Vision 3D. Compare this large theater, with queue and pre-show inside, to the immensity of Star Wars: Galaxy’s Edge. You could place the entire Muppet’s building in the entrance area near the bright tan section on the left, and still have enough room for all of Toy Story Land and then some! 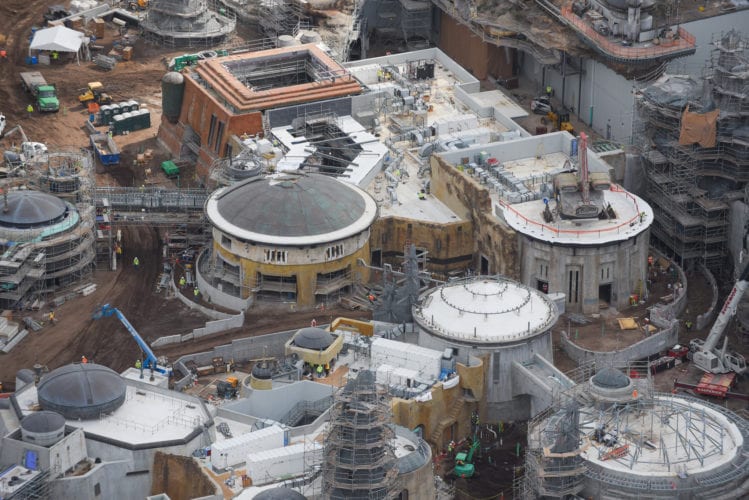 Zooming in on the main marketplace area, we can see the story unfolding through paint and specially-designed architecture. The main domed building has white windows above the entrance areas, and with a closer look, you can see hints of rust and discoloration. The walls are certainly in disarray nearby, under the spaceship. These exterior walls appear to have gone through storms and battles, yet they’re very much new. 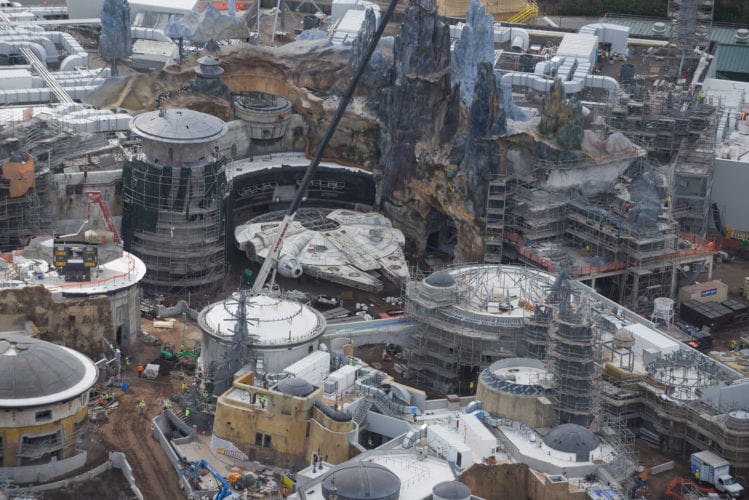 Then, looking at the black spire mountains, we can see even more rich detail in the dark blues, combined with the mossy areas and colored stone. Each section of the facade offers a new part of the story that is being told here. Even the little turrets in the mountainous section help explain the starport-esque feel of the area. 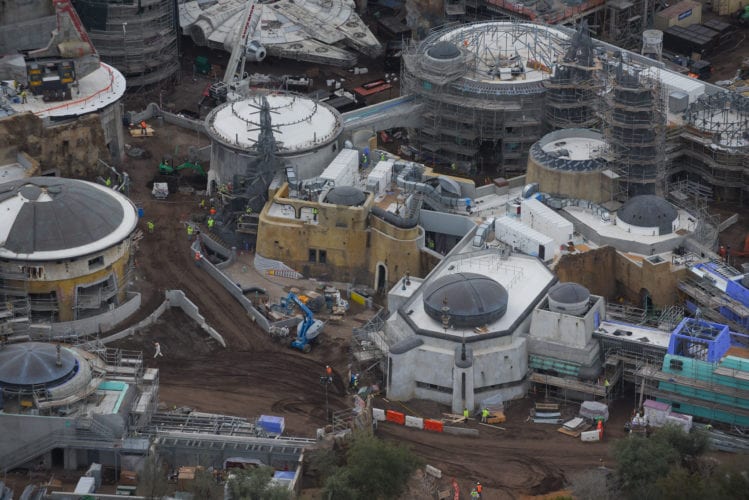 It’s great to see how much is finished on the screw-top roof building. The walls appear like old concrete, with visible water stains near the openings. On the bottom right, it appears that this area will feature a large archway. We know that the First Order will be in control of much of the city, and this section seems like the perfect place for a First Order banner. The back alcove could also be a great spot for a small shop or two. This section could be an area where small, unannounced mini-shows could happen. Galaxy’s Edge will be full of wild characters, so it is believed that random encounters will happen pretty regularly in the alleyways. Watch your back! 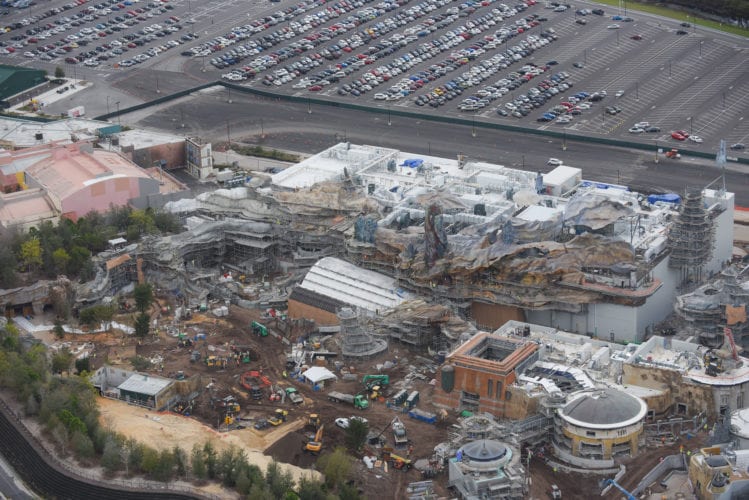 Looking over the land, we can see out of the main city area of the Black Spire Outpost and into the Resistance-owned section. This area will feature an X-Wing and a Resistance turret! The overhanging mountains continue to take shape, with the tree ruins dominating the stony look. 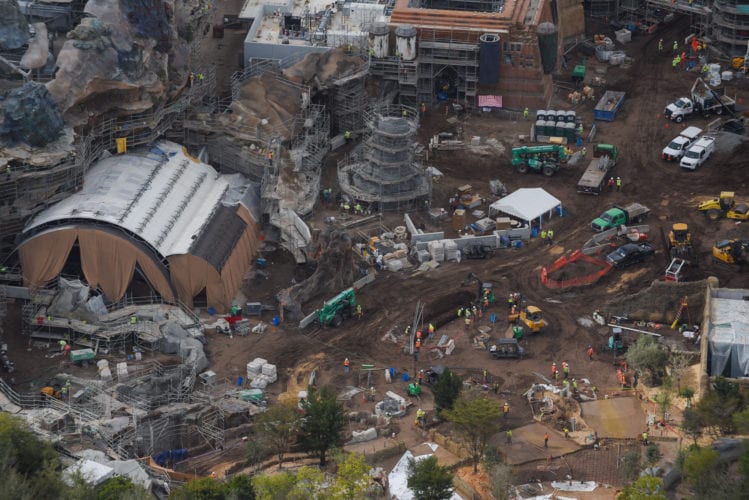 Looking closer in this area, we can see concrete beginning to be poured on the bottom right. This will eventually be the main entrance into Star Wars: Galaxy’s Edge. The entrance will take guests from the Grand Avenue section of Disney’s Hollywood Studios and drop them off here, near the entrance to Star Wars: Rise of the Resistance.

In the middle, we can see what appears to be another tree ruin shooting out from the ground, near one of the main entrances for the marketplace. Back near the bottom, we can see a collection of workers near a sudden drop in the dirt. This extreme elevation change will surely be a way to split the paths. Lots of trees are expected to be in this area once more major construction leaves. 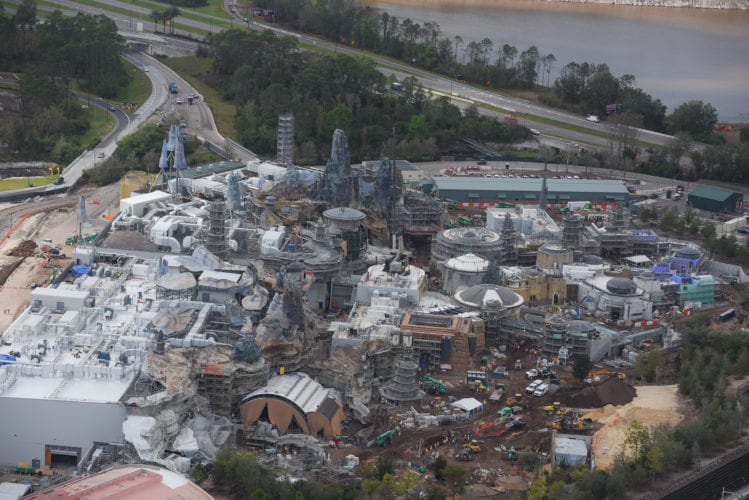 With an expected opening date for this fall, we’re excited to see how much more the land changes. Is there any detail you specifically love? Tell us in the comments!

Also, be sure to check out this new construction overview video and links to past articles!

‘Delusion: The Blue Blade’ transports players through time and space

“It’s amazing to see the detail Disney is giving this ship, even though guests will most likely never be able to see the top.”

Considering the newest leaks guests will see the top of the ship from the queue of the ride. 🙂