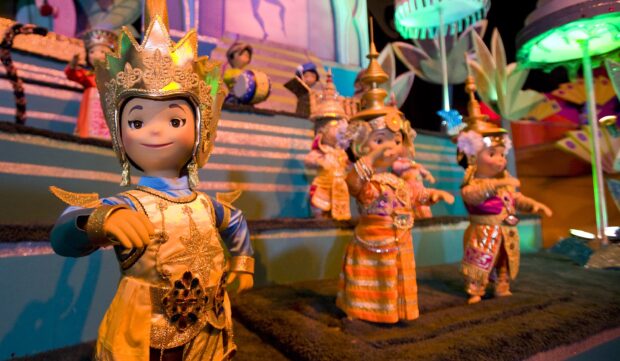 To honor the 50th anniversary of “it’s a small world’s” debut at the 1964 New York World’s Fair, guests and Cast Members around the world will unite in song for a historic event.

Fans around the world also are invited to join the global sing-along virtually. SmallWorld50.com serves as a “global hub” of music and harmony where guests may record videos of themselves singing the classic song and create virtual “it’s a small world” dolls to benefit UNICEF (United Nations Children’s Fund). UNICEF provides health care and immunizations, clean water and sanitation, nutrition, education, emergency relief and more to children around the world.

”‘it’s a small world’ has inspired hundreds of millions of people through its timeless theme,” said Tom Staggs, chairman, Walt Disney Parks and Resorts. “Every moment of every day there are Disney guests enjoying ‘it’s a small world’ somewhere around the globe. The 50th anniversary of this attraction represents a celebration of the shared optimism, hope, and humanity of people throughout the world.”

To help announce the celebration, Disney Parks released a video featuring people around the world singing, dancing to and playing “It’s a Small World.” Filmed across six continents in more than 25 countries, the video features international performers, including bagpipers in Scotland, Bollywood movie actors in India, a firefighter in New York City, and members of the Mormon Tabernacle Choir, to create one worldwide video.

That video and others will be part of the launch of SmallWorld50.com, the global website for the attraction’s anniversary. Fans around the world are encouraged to participate online by recording on the Small World 50 website videos of themselves singing “It’s a Small World” and by creating virtual “it’s a small world” dolls to share with their friends through social media.

The Walt Disney Company will donate $150,000 to benefit UNICEF in honor of the 50th anniversary of “it’s a small world,” plus $1 for every sing-along video recorded on SmallWorld50.com and another $1 for every virtual doll created on the website, up to $100,000. Disney began its relationship with UNICEF in 1964 with the debut of “it’s a small world” at the New York World’s Fair.

Throughout the day, Disney Parks also will sponsor Google Hangouts that invite people from around the world to participate in the anniversary events. Fans are encouraged to visit SmallWorld50.com for details.

Here’s a video ridethrough of the attraction at the Magic Kingdom at Walt Disney World:

Taste of Epcot International Festival of the...