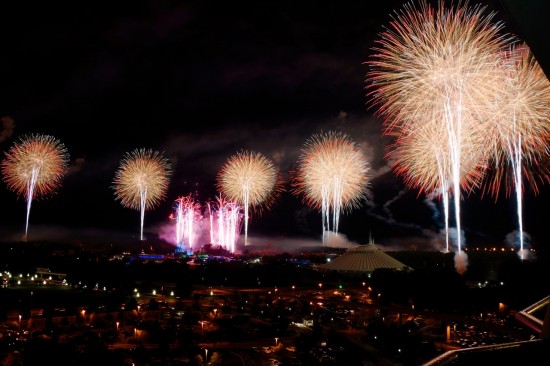 Guests will have a chance to celebrate the Fourth of July during a week-long celebration at the Walt Disney World Resort as part of Limited Time Magic.

It’s a seven-day patriotic extravaganza as Disney Parks honors America with a Fourth of July celebration like never before. At Magic Kingdom, a 15-minute 360-degree fireworks spectacular rockets into the air every night with ”Disney’s Celebrate America! A Fourth of July Concert in the Sky.” The fireworks spectacular takes place at 9 p.m. on July 3 and 4, and 10 p.m. on July 1, 2, 5, 6 and 7.

Guests can also enjoy a patriotic spectacle as Goofy, Donald and Pluto lead a procession down Main Street, U.S.A, prior to the daily Celebrate a Dream Come True parade at Magic Kingdom. The pre-parade features the Main Street Philharmonic, Citizens of Main Street and Walt Disney’s historic horse-drawn calliope.

Patriotic-themed merchandise and tasty treats inspired by Americana will also be on the menu all week long.

On Independence Day only:

An afternoon of live entertainment kicks off at 12:30 p.m. in the America Gardens Theatre with the Voices of Liberty Fourth of July concert. This holiday special is a harmonizing partnership of the eight-part, a capella Voices of Liberty, Spirit of America Fife and Drum Corps and Disney characters. Showtimes are 12:30, 1:45, and 3 p.m.

The Heartbeat of Freedom, a special tribute following IllumiNations: Reflections of Earth lights up the sky at 10 p.m.

Disney’s Hollywood Studios: Enjoy a twist on traditional fireworks with the all-new “Rockin’ 4th of July Celebration”. The party begins at the Sorcerer Hat with a DJ at 6 pm.