Celebrate innovation and invention at the Orlando Mini Maker Faire 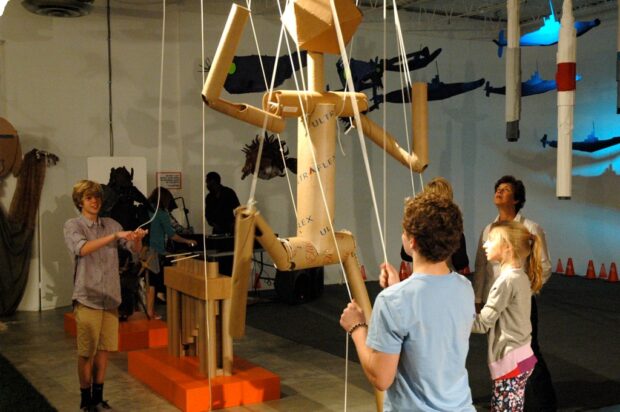 The second annual Orlando Mini Maker Faire will be held this Saturday, Oct. 5, 2013 at the Orlando Science Center. It’s a community-based learning event that aims to inspire the public to become a “Maker” through do-it-yourself science and technology, art, rockets, robots, crafts, music, hands-on activities and more.

This year’s event features more than 100 fantastic, one-of-a-kind projects from local Makers. Makers are the DIY-kind of people who demonstrate their creativity and knowledge through personal creations. Makers come from all ages and backgrounds, ranging from tech-enthusiasts to crafters to homesteaders to scientists to garage tinkerers. Each shares a common passion for innovation and creativity, as well as an educational spirit to inspire and encourage new Makers.

At the Orlando Mini Maker Faire, you can expect to see creations like the Dog Powered Robot: a robot suit powered by a real pooch. Other robots include FIRST Robotics Competitions’ industrial strength, ultimate Frisbee-flinging robot and Robots Are Awesome!’s original mixed-media creations by artist Melissa Witkowski, who will be sculpting her clay and wire robots during the event.

If you’ve ever imagined yourself as a secret agent, stop by Jax Locksport’s LockpickVillage and unlock the secrets of lock picking. Barry S. Anderson, the Professor of Ghoul-School FX Workshops, will teach you fun, creepy special effects in his makeup and art workshops. And for a refreshing treat and invention, meet Joe Donoughe, inventor of Human-Powered Snow Cones. Visit this booth to make your own snow cones via a human-sized hamster wheel.

“We tend to be defined sometimes today just as consumers, but I believe all of us are Makers and all of us like to view ourselves as creative and productive,” said Dale Dougherty, publisher of MAKE magazine and grandfather to Maker Faires worldwide. “The Maker Faire is an invitation to anyone who sees themselves as a Maker.”

Experience the Orlando Mini Maker Faire with admission to Orlando Science Center which is $19 for adults and $13 for youth (ages 3 – 11). Tickets include access to all four floors of exhibits, giant screen and 3D educational films, one Hollywood feature-length film and live programming. Admission and parking are free for Science Center members.

(Photo from the Cardboard Art Festival supplied by the Orlando Science Center.)