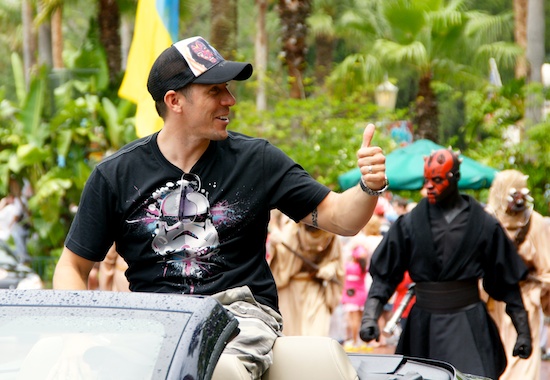 Disney has released the full list of celebrities that will be attending the annual Star Wars Weekends at Disney’s Hollywood Studios.

It was already announced that Anthony Daniels (C-3PO) would be in attendance the first weekend to help reopen the new 3D Star Tours ride, and thanks to the Disney Parks Blog, we now know Anthony will be returning for the second weekend as well, and the names of the others who will be visiting:

Celebrities James Arnold Taylor (voice of Obi-Wan Kenobi on The Clone Wars) and Ashley Eckstein (voice of Ahsoka Tano on The Clone Wars) will be hosting each weekend. Ashley will host “Clone Wars: Behind the Force,” and James will present an event-first: he will star in a one-man show that showcases some of the many voices he has performed throughout his career, including those from The Clone Wars.

In addition to the celebrities, more than 60 different Star Wars characters will be meeting guests. Also look for the popular Hyperspace Hoopla to return with a new edition.

Jimmy Buffett’s Margaritaville pays homage to the hamburger throughout May

‘Earth to Ned’ from The Jim Henson Company...

Is featuring celebrities in attractions a mistake? –...

Get a message from ‘Darkwing Duck,’ ‘Descendants’ stars...

do you have the celebs for 2012? when are they normally announced?

Win a night in Cinderella Castle with...