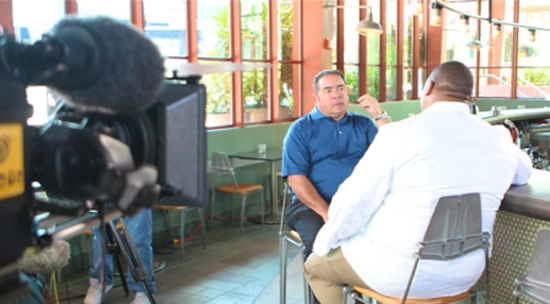 Celebrity Chef Emeril Lagasse has partnered with the Cooking Channel on a new television program, Emeril’s Florida. This new show focuses on Florida’s many destinations and unique dining, beginning with Orlando as the focus for the show premier episode.

“With two restaurants in Orlando, it is only natural that Chef Emeril Lagasse selects our city to kick off this new show,” said Danielle Courtenay, chief marketing officer of Visit Orlando. “The culinary scene in Orlando is exploding and these new unique restaurants are just a small sample of the growth in our culinary scene. Orlando’s nightlife and entertainment includes unique pubs and trendy shows for all.”

The episode makes its first stop at the Ravenous Pig in Winter Park where James Beard Award nominee James Patrakis, the restaurant’s owner and chef, showcases a Cobia dish. Then Emeril heads to Universal CityWalk to chat with Emeril’s Orlando Culinary Director Bernard Carmouche and they prepare a black grouper with sofrito, rock shrimp and avocado toast. Emeril then visits Vines Grille & Wine Bar to try a unique combination of bacon and wine at one of Orlando’s most well known wine establishments. Emeril will then visit Icebar Orlando, a tavern made entirely of ice on International Drive. Emeril will finish off his day at Rosen Shingle Creek to sample award-winning Executive Pastry Chef David Ramirez’s creative chocolates.

The show debuts at 10:30 a.m. Sunday, Jan. 6, 2013 on the Cooking Channel. More information is available at cookingchanneltv.com.

2020 Epcot International Festival of the Arts...