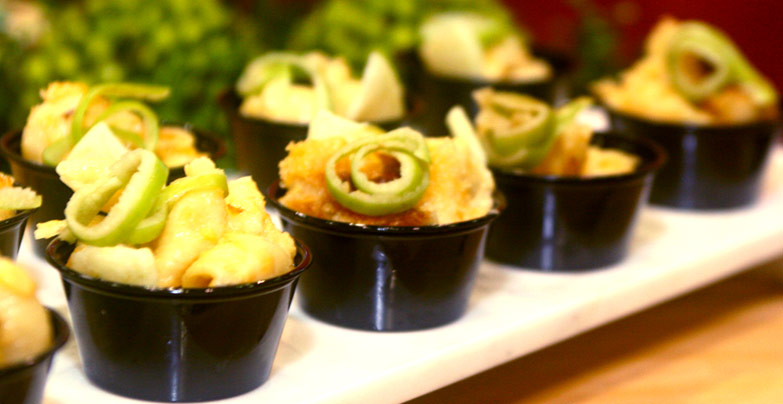 Chefs will compete for the O-Town MacDown crown on August 20 to benefit Give Kids the World Village.

On August 20, the O-Town MacDown will serve up the best of the best mac-n-cheese at Osceola Heritage Park when top chefs compete to benefit Give Kids The World Village and help make dreams come true for children with life-threatening illnesses.

Celebrity baker and Kissimmee resident Elaine Duran of season 4 of TLC’s “The Next Great Baker” will be a guest judge this year. The competition also will feature a team of kid chefs for the first time.

The third annual O-Town MacDown is scheduled on Saturday, Aug. 20, from 11 a.m. to 3 p.m. at Osceola Heritage Park. The event promises to find the best mac-n-cheese in Central Florida by inviting chefs from area resorts, restaurants and other eateries to offer up their top recipe for tastings.

Proceeds will go to Give Kids The World Village, a 79-acre whimsical resort built for kids that is home-away-from- home to nearly 8,000 children with life-threatening illnesses and their families each year. Wish families from all over the world enjoy weeklong, cost-free vacations to visit Central Florida’s theme parks.

The event features talented chefs and caterers from around Orlando, each looking to whip up the best mac-n-cheese dish in Central Florida. Chefs from such well known restaurants as Hard Rock Café, Four Seasons Resort Orlando and Bubba Gump Shrimp Company will compete. The presenting sponsor is Subaru South Orlando.

For the first time, the event also will feature a team of young chefs. A group from the Boys and Girls Club of Central Florida is being trained to compete, led by Chef Joel Padilla of Platinum Chef, winner of last year’s Wild Card Award.

In addition to the mac-n- cheese battle, the event will include live entertainment, cooking demonstrations, a Kids’ Zone, and unlimited samples of the best mac-n-cheese on the planet.

Tickets are available online at OTownMacDown.org. They are $15 for adults in advance ($20 at the door) and $10 for kids ages 12 and younger ($15 at the door). Children under 3 are free. Osceola Heritage Park is located at 1875 Silver Spur Lane in Kissimmee.

For more information visit gktw.org/features/feature-macdown.php and watch our video of the 2015 O-Town MacDown:

Mobile ordering gets a new look on...